"I Just Had a Chat with Our Killer" 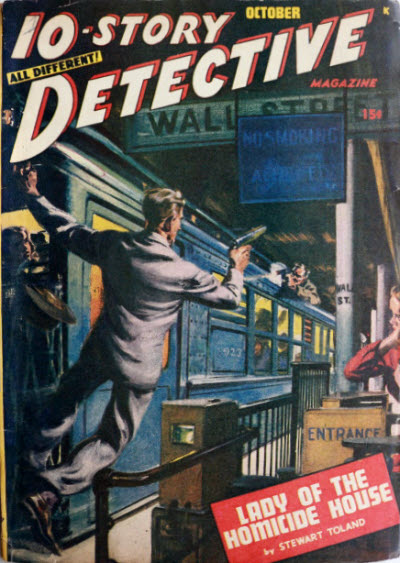 "This rod may look small, but I can put five bullets just a little smaller than .22’s in your face before you could move two feet."

A police detective is certain he knows whodunit, but there's a snag. He already has motive and opportunity, natch, but it's the means that's proving hard to nail down, since the murder weapon is not only unique but also, as our detective suspects, it's likely that the cunning killer has already destroyed it . . .

Comment: With its humorous buddycop dynamic working for it, this efficient little police procedural wouldn't have been out of place as a Dragnet episode, either radio or TV.

Characters:
~ Jack Arnold, a.k.a. "Jack Fort":
". . . looked thoughtful for a moment. 'No, I can’t say that I did. The garbage truck goes by about that time. It’s hard to hear anything,' he replied. 'I didn’t even know this Marlowe had been shot until you told me.'"
~ Charles Marlowe, a.k.a. "Lefty":
"Yes, that had been a good many years ago. But he had still recognized Lefty when he suddenly showed up two months ago. Lefty hadn’t known him, but that was just as well.
This way he would get Lefty for old time’s sake, and not even Lefty would know he had
done it."
~ Tommy, a.k.a. "Tommy":
"Some guy moved in about a month ago. Last night he was shot while he was sitting in
front of his window, but they didn’t find him until this morning."
~ Logan, homicide detective:
"How many times do I have to tell you not to talk when you’re eating?"
~ Monk, Logan's partner:
". . . opened his mouth to say something, remembered the apple, and shut it again."
~ Haley, police ballistician:
"I’m kind of sorry you brought that damned thing in. I won’t sleep for a week wondering about it. If somebody told me about it, I’d say they were nuts. I’ve seen just about every
piece of lead a gun can throw, but that thing has got me stumped. I’ll tell you one thing, produce the gun that shot this bullet and I’ll prove to any jury it’s the murder weapon."
~ The landlady:
"'Oh, Lieutenant, I wish you would find the murderer and take the'—she didn’t say what,
but pointed at the corpse on the floor without looking at it—'out of my house.'"

Resources:
- So far not much has turned up about our author, Rodney Worth; FictionMags lists only two stories by him, the one above and "The Hammerless Heater," Ten Detective Aces, January 1948.
- The killer's motive stems from what happened during Prohibition; see the Wikipedia article (HERE). If you'd like to brush up on firearms ballistics, see Wikipedia (HERE), (HERE), (HERE), and (HERE), and the American Bar Association's book extract (HERE; PDF).