IF YOU ARE an ailurophile, the mere thought of someone abducting a feline might fill you with horror; for the sleuth in our first story (who, by the way, bears an uncanny—but no doubt coincidental—resemblance to a certain "psychological detective"), it will require all of his finely honed scientific deductive skills when he's called in to investigate . . .
"The Theft of the Blue Persian."
By Mrs. Wilson Woodrow (Nancy Mann Waddel Woodrow, 1867-1935). 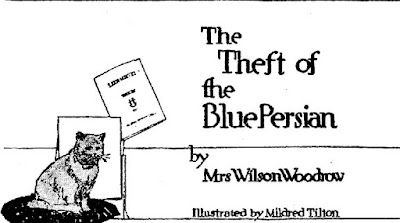 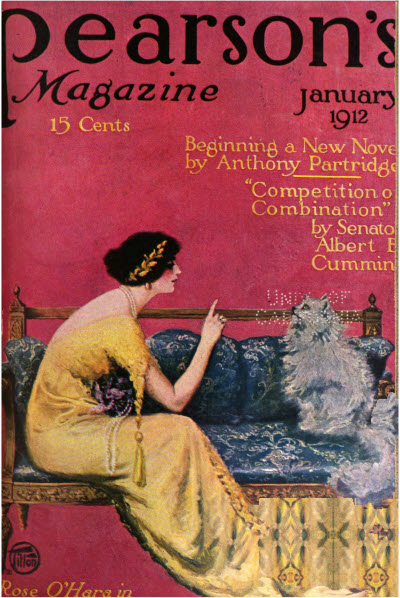 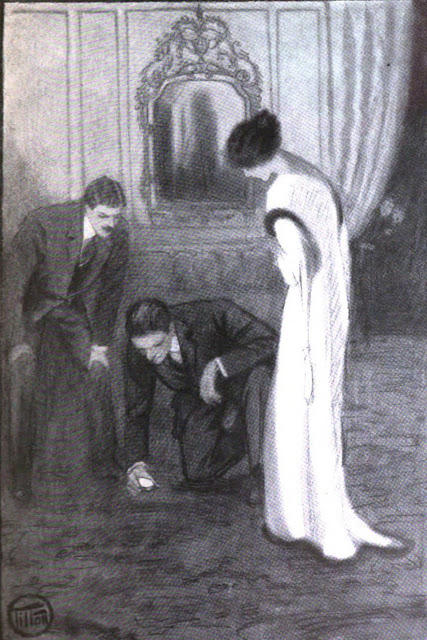 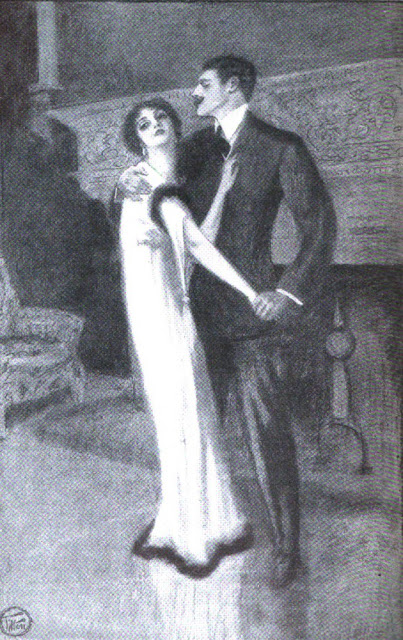 ". . . this man belongs to the intellectual type of criminal, highly fertile in resource and accomplished in expedient."
He had "incredibly long hair and pedigree and unusually short temper"—well, of course he did . . . .
Principal characters:
~ Fennell Darke:
"Mysterious case—very—considerably more in it than appears on the surface."
~ Willy Gaines:
". . . appeared the most worthy emulator of Fennell Darke, crawling over the floor in every direction, and smothering profane expressions as he bumped his head with a certain mathematical frequency against the sharp corners of heavy pieces of furniture."
~ Rose O'Hara:
". . . the great Irish-American soprano, and the object of his fondest adoration . . ."
~ Prince Ahmed:
". . . an arrogant, vain, hardened winner of cups and medals and blue ribbons . . ."
~ Ernestine:
"But Monsieur, I have searched and searched, as wiz a fine toot' comb."
~ Miss Hodgkins:
". . . from the circumstances, we could only conclude that he had been stolen."
~ Regina Wampole:
". . . his rich and rigid maiden aunt . . ."
~ Senator Wodeburn:
"That dear, dignified old gentleman would never dream of stealing a cat."
References and resources:
- Is it merely a coincidence that The Achievements of Luther Trant had been published just two short years prior to our story? See Vintage Pop Fictions (HERE) for a discussion of that book and Wikisource (HERE) for the text itself. 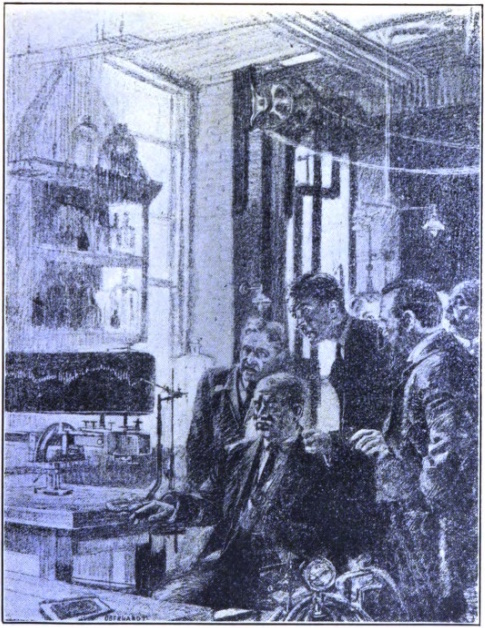 - My, how time flies. Our first encounter with Mrs. Wilson Woodrow was well over seven years ago as we highlighted her novel work (HERE); sadly, some links have gone dead.
~ ~ ~
. . . and now for something completely different . . .
"Catty Cornered."
By Joe Archibald (1898-1986). 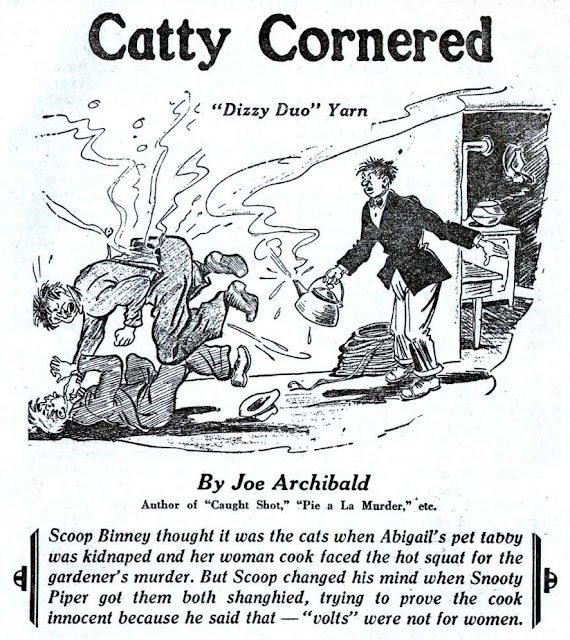 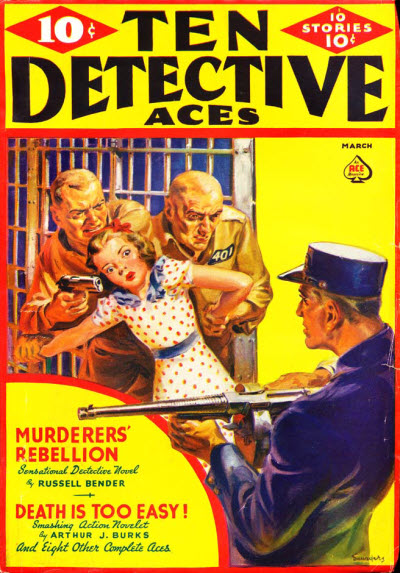 "I am sure that criminals always slip up and leave a clue."
True enough—but a knitting needle?
Main characters:
~ Olaf Kumquat:
"Somebody hit him with the top of that bird bath, and I think he is dead."
~ Snooty Piper:
"It is quite hasty we're getting. It is circumstantial evidence. Let us look around a little more first."
~ Queen Victoria:
"Me-e-o-ow!"
~ Scoop Binney:
"Nice kitty."
~ Abigail Hepplethwaite:
". . . is a rich old jill who lives out in Back Bay. She could finance three wars in Europe for ten years and still not make a dent in her rock pile."
~ Iron Jaw O'Shaughnessey:
". . . we will not stand by and let a criminal evade punishment just because of an alley cat!"
~ Henrietta Trilby:
"I fired the cook. The cook got burned up worse than her cakes. The cook came back. She stole the cat."
~ Keelhaul:
"Don't make me laff, 'cause me lips is cracked."
~ Skullbuster Boody:
"If he leaned against the Statue of Liberty, France would have to send us another one."
References and resources:
- "the hot squat": In those days it didn't mean a gym exercise:
"U.S. slang: an electric chair. Origin: 1920s; earliest use found in Joseph Patrick McEvoy (1895–1958)" (Lexico HERE and Wikipedia HERE).
- "got them both shanghied [spelling]": It isn't often that a city lends its name to a criminal act:
"The verb 'shanghai' joined the lexicon with 'crimping' and 'sailor thieves' in the 1850s, possibly because Shanghai was a common destination of the ships with abducted crews. The term has since expanded to mean 'kidnapped' or 'induced to do something by means of fraud'" (Wikipedia HERE).
- "They've found Judge Crater": For a while there everybody knew who he was, even if they didn't know where he was:
"Joseph Force Crater (January 5, 1889 – disappeared August 6, 1930; declared legally dead June 6, 1939) was a New York State Supreme Court Justice who went missing amid a political scandal. He was last seen leaving a restaurant on West 45th Street in Manhattan and entered popular culture as one of the most mysterious missing persons cases of the 20th century" (Wikipedia HERE).
- "Back Bay": Typically, folks living there got rocks:
"Back Bay is an officially recognized neighborhood of Boston, Massachusetts, built on reclaimed land in the Charles River basin. Construction began in 1859, as the demand for luxury housing exceeded the availability in the city at the time, and the area was fully built by around 1900" (Wikipedia HERE).
- "into a swindle chariot": From the context we'd have to say it's a taxicab:
"'Taxicab' is a compound word formed from contractions of 'taximeter' and 'cabriolet'" (Wikipedia HERE and HERE).
- "all the way to Little America": That's a long way:
"Little America was a series of Antarctic exploration bases from 1929 to 1958, located on the Ross Ice Shelf, south of the Bay of Whales" (Wikipedia HERE).
- "in Beantown": Still a common nickname for Boston:
". . . refers to the regional dish of Boston baked beans. In colonial days, a favorite Boston food was beans slow-baked in molasses" (Wikipedia HERE).
- "like the Chicago fire": When the subject of big fires would come up, this was the one Americans thought of first:
"The Great Chicago Fire was a conflagration that burned in the American city of Chicago during October 8–10, 1871. The fire killed approximately 300 people, destroyed roughly 3.3 square miles (9 km2) of the city including over 17,000 structures, and left more than 100,000 residents homeless" (Wikipedia HERE). 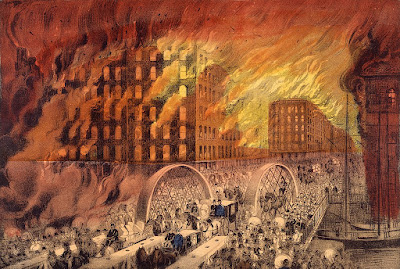 - "Ma-a-a-any br-r-ra-ave hear-r-rts are asle-e-ep . . .": Even old songs linger in the memory:
"'Asleep in the Deep' is a song written by Arthur J. Lamb and composed by Henry W. Petrie in 1897. It is titled after a refrain at the end of the song. The phrase 'asleep in the deep' refers to those who have drowned. The lyrics allude to those who have met such a fate, while at sea" (Wikipedia HERE). 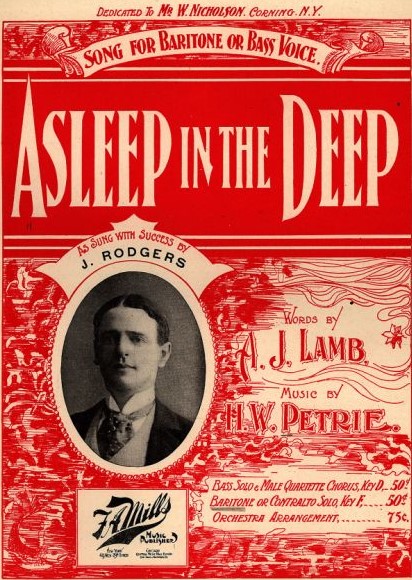 - "a corner of Fenway Park": It has a long and storied history:
"Fenway Park is a baseball park located in Boston, Massachusetts, near Kenmore Square. Since 1912, it has been the home for the Boston Red Sox, the city's American League baseball team, and since 1953, its only Major League Baseball (MLB) fran-chise. While the stadium was built in 1912, it was substantially rebuilt in 1934 . . ." (Wikipedia HERE).
- "the Irish Sweepstakes": A longshot, to be sure:
"The sweepstake was established to raise funding for hospitals in Ireland. A significant amount of the funds were raised in the United Kingdom and United States, often among the emigrant Irish. Potentially winning tickets were drawn from rotating drums, usually by nurses in uniform. Each such ticket was assigned to a horse expected to run in one of several horse races, including the Cambridgeshire Handicap, Derby and Grand National. Tickets that drew the favourite horses thus stood a higher likelihood of winning and a series of winning horses had to be chosen on the accumulator system, allowing for enormous prizes" (Wikipedia HERE).
- "does not look like Freddie Bartholomew": A well-known face:
"Frederick Cecil Bartholomew (1924–92), known for his acting work as Freddie Bartholomew, was an English-American child actor. One of the most famous child actors of all time, he became very popular in 1930s Hollywood films" (Wikipedia HERE). 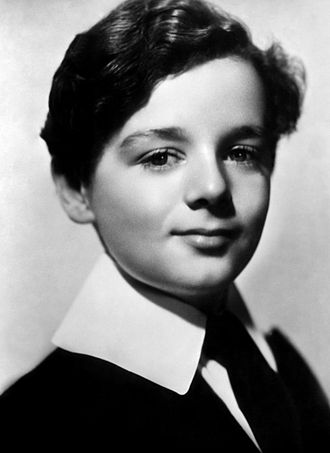 - "the very tough tar": Not sticky at all:
"Jack Tar (also Jacktar, Jack-tar or Tar) is a common English term originally used to refer to seamen of the Merchant or Royal Navy, particularly during the period of the British Empire. By World War I the term was used as a nickname for those in the U.S. Navy. Members of the public and seafarers alike made use of the name in identifying those who went to sea. It was not used as a pejorative and sailors were happy to use the term to label themselves" (Wikipedia HERE).
- "two half hitches": A throat is where you shouldn't find them:
"The half hitch is a simple overhand knot, where the working end of a line is brought over and under the standing part. Insecure on its own, it is a valuable component of a wide variety of useful and reliable hitches, bends, and knots" (Wikipedia HERE).
- "a very ugly-looking roscoe": Any handgun:
"If the roscoe that refers to a handgun owes its existence to a particular Roscoe, that person is not known to history. What we do know is that the use of roscoe to refer to a handgun dates to the early 20th century—and is playable in Scrabble" (Merriam-Webster HERE).
- "the Northwest Mounted": A clutch of constables, eh:
"The North-West Mounted Police (NWMP) was a Canadian para-military police force, established in 1873, to maintain order in the new Canadian North-West Territories (NWT) following the 1870 transfer of Rupert’s Land and North-Western Territory to Canada from the Hudson’s Bay Company, the Red River Rebellion and in response to lawlessness, demonstrated by the subsequent Cypress Hills Massacre and fears of United States military intervention" (Wikipedia HERE).
- "the Popeyes": A collective term for a singular character:
"Popeye the Sailor Man is a fictional cartoon character created by Elzie Crisler Segar. The character first appeared in the daily King Features comic strip Thimble Theatre on January 17, 1929, and Popeye became the strip's title in later years. The character has also appeared in theatrical and television animated cartoons" (Wikipedia HERE). 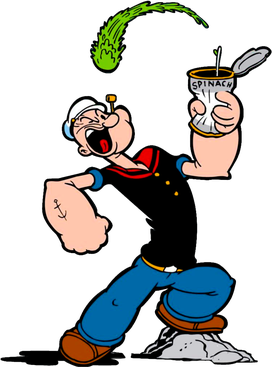 - Here is Bethlehem Books's compact bio of Joseph Stopford Archibald:
"Joe Archibald was born in 1898, in Newington, New Hampshire. He first became a published writer at age 15, after submitting a prize-winning contribution to the Boston Post. A veteran of the armed forces, he served aboard a naval sub-chaser during the First World War and continued to write during his time in the service—working as a cartoonist for military publication. Following the war, Joe Archibald found work as a cartoonist and sports writer for the New York-based McClure Newspaper Syndicate. He would continue to work as cartoonist, art editor and freelance writer throughout his entire career.
"In 1947, Mr. Archibald published Rebel Halfback, his first book and the beginning of a string of young adult sports stories that would stretch over the next 20 years. These novels covered the bases of the three major sports of his era, baseball, football and basketball, and often contained themes that went beyond simply stirring tales of athletic heroics to focus on the growth and maturation of the story’s protagonist. In total, this extremely popular writer of sports/action books would go on to publish over fifty novels, including several books with a military focus, all aimed at young adults.
"Joe Archibald spent most of his adult life in New York State and died on March 1, 1986, in Barrington, New Hampshire at the age of 87."
- Archibald wrote for just about every venue around, including Flying Aces, in which he had a long running series with a continuing character named Phineas Pinkham (Wikipedia HERE).
- A very busy man, Joe Archibald nevertheless generated several Dizzy Duo stories for Ten Detective Aces every year from 1934 to 1949 (FictionMags data). Some of the Duo's stories have been reprinted as e-books (Goodreads HERE).
~~~~~~~~~~~~~~~~~~~~~~~~~~~~~~~~~~~~~~~~~~~~~~~~~~~~~~~~~~~~~~~~~~~~~~~~~~~~
Posted by Mike Gray at 11:03 AM