"Yes, My Friend, I Killed the Man" 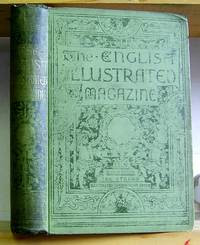 "Being an Account of the Pursuit of the Tiles, Statement of the Clock, and the Grip of a Coat of Orange Spots, Together with Some Criticism of a Detective Said to Be Carved from an Old Table-Leg."

"Every man's conscience," wrote the Bard, "is a thousand swords," as our guilt-ridden narrator discovers, and they, all of them, have sharp, piercing points . . .

Resources:
- A favorite of college profs everywhere, Stephen Crane, as far as they're concerned, achieved literary immortality with The Red Badge of Courage (1895; HERE and HERE), although tuberculosis sealed his physical mortality at the early age of 28; see the comprehensive Wikipedia article (HERE).

The bottom line: "I don't feel guilty for anything. I feel sorry for people who feel guilt."
― Theodore Robert Bundy
Posted by Mike Gray at 10:15 AM No comments:

"He Was Going to Warn Himself but He Didn't Finish" 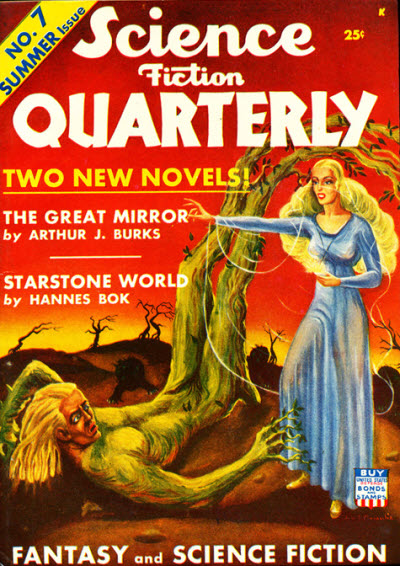 "Tahiti is a funny place for this sort of thing."

There's an ancient symbol of a snake with its tail in its mouth, presumably representing infinity. Wharton should have taken the hint . . .

Resource:
- Apart from his birth year, that the "L" stands for Leslie, and that he had about a dozen SFF stories published in the thirties and forties (thanks, FictionMags), we can learn nothing else about our author.
Posted by Mike Gray at 11:31 AM No comments:

"Suppose Some Daring Napoleon of Crime Should Hatch a Startling Conspiracy to Seize the Steamer, Intimidate the Crew and Passengers, and Possess Himself of the Huge Treasure?" 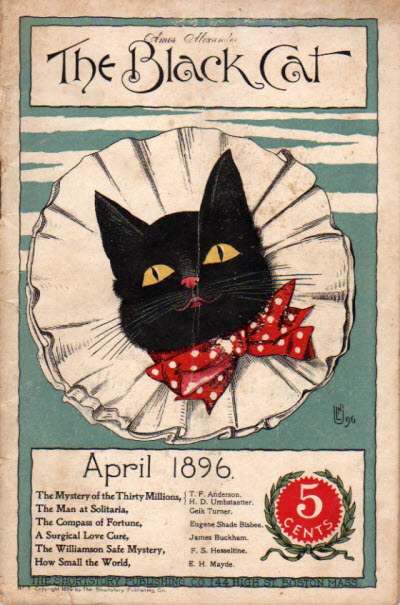 ". . . the Oklahoma was taking to the shores of insatiate John Bull the largest lump amount of gold ever shipped upon a single vessel within the memory of man."

Stealing a large sum of money from a ship well out to sea is a task not easily undertaken, and many would regard it a fool's errand, considering how few opportunities there are to effect an escape. The best course of action should be obvious: steal the ship . . .

Comment: A mashup of crime and science fiction that could easily have been expanded into a novel; the finale is a disappointment. 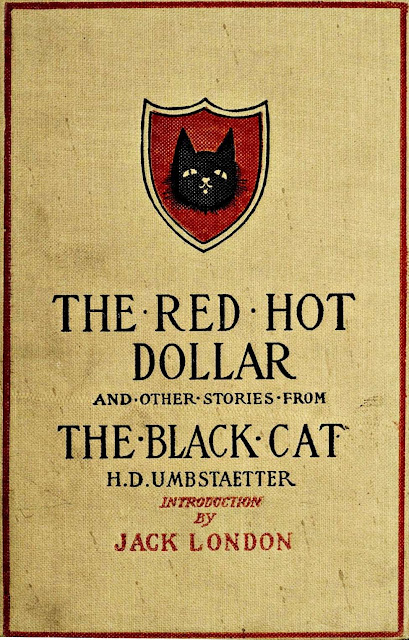 Resources:
- Other stories about thefts at sea that come immediately to mind include C. J. Cutcliffe Hyne's "The Looting of the Specie Room" (1900) (HERE) and Agatha Christie's "The Million-Dollar Bond Robbery" (1924) (HERE).
- FictionMags thumbnails our author, H. D. Umbstaetter, this way: "Born in Ohio; worked on newspapers in Cleveland, New York and Baltimore; became magazine publisher in Boston." From 1895-1912 he was the editor of The Black Cat magazine, where, mirabile dictu, "The Mystery of the Thirty Millions" was first published.
- The story makes a reference to "Colonel Sellers, of nineteenth century fame"; see (HERE), (HERE), and (HERE) for who "Colonel Sellers" was.

The bottom line: "If gold ruste, what shal iren do?"
— Chaucer
Posted by Mike Gray at 11:44 AM No comments:

"The Glorious Crumb of Carbon Is, Of Course, Priceless"

NO LESS an eminent personage than the Queen herself discovers the theft of a precious diamond stolen literally out from under her nose, and it falls to Mr. Verriter, a no less
eminent detective, to retrieve it. 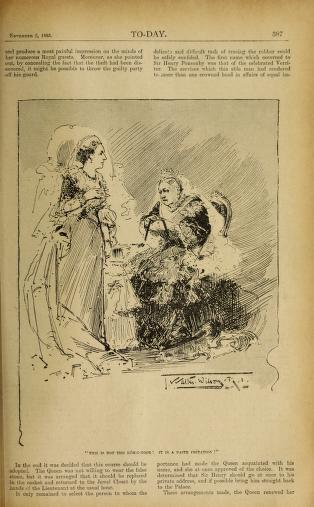 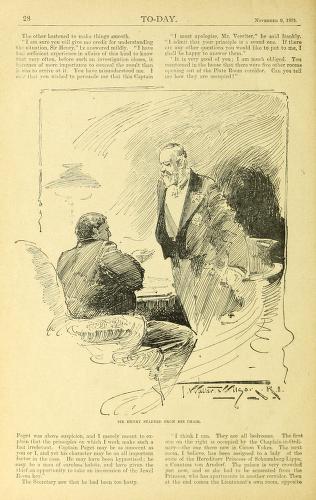 Chapter III, November 16, 1895 (HERE) (3 pages, 2 illos): The Clue of the Crumb of Steel
"That is where the real difficulty of detective work generally lies, in eliciting little points which those who know them do not think important enough to be worth mentioning." 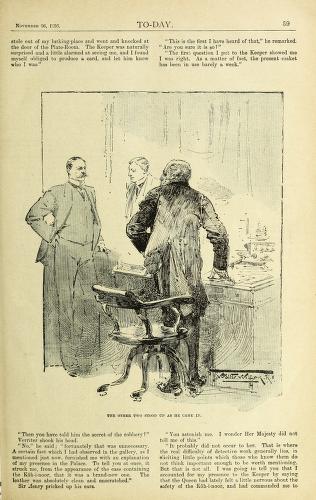 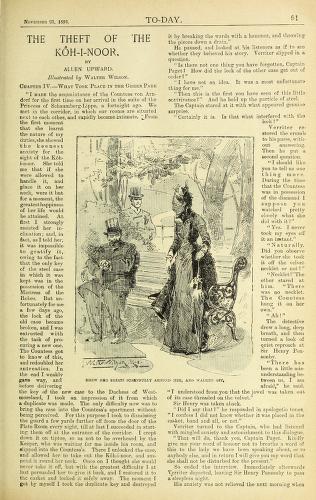 Chapter V, November 30, 1895 (HERE) (3 pages, 2 illos): Mr. Verriter's Reward
". . . I am afraid that a bribe of twenty or perhaps fifty thousand pounds would corrupt a good many ladies in even higher stations." 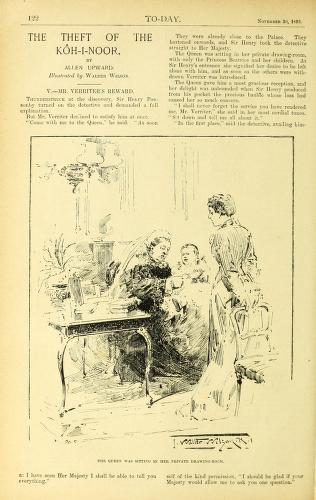 Resources:
- Our author, Allen Upward (who ended his life as a suicide, unfortunately), is credited with first using the word "scientology"; see Wikipedia (HERE) and The Modernist Journals
Project (HERE) for more.
- Like other Victorian authors, Upward wrote widely in many genres long before they were categorized, including what we now call science fiction; see the SFE (HERE) and the
ISFDb (HERE).
- To-Day magazine was founded and edited by Jerome K. Jerome of Three Men in a Boat
fame (HERE) until he was forced to turn it over to Barry Pain; the Online Books Page has
a list of available issues (HERE).
Posted by Mike Gray at 9:42 AM No comments:

"It Would Be Fairly Easy to Imitate One of Them" 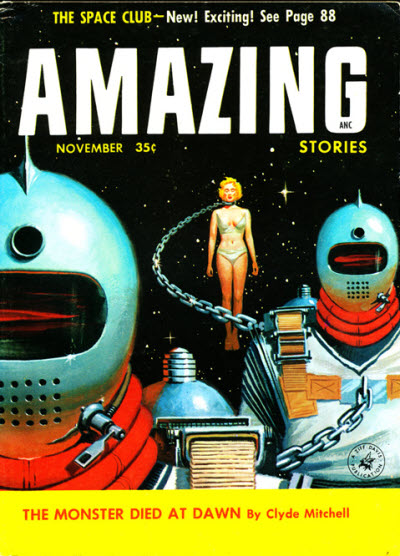 "The planet looked ripe for plucking."

Which is easier, breaking out or breaking in? Ghevil found out—the hard way . . . 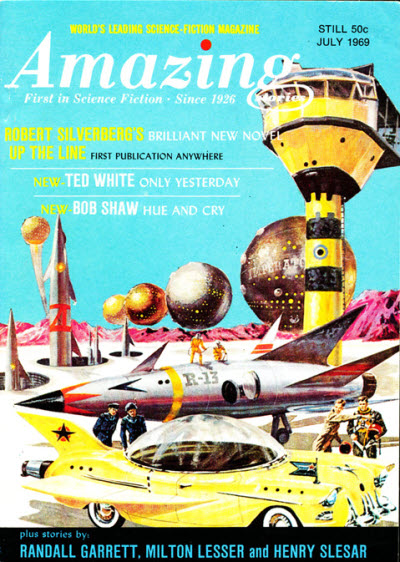 Resource:
- It was just last month that we visited with ace pulpster Randall Garrett (HERE).
Posted by Mike Gray at 12:27 PM No comments: 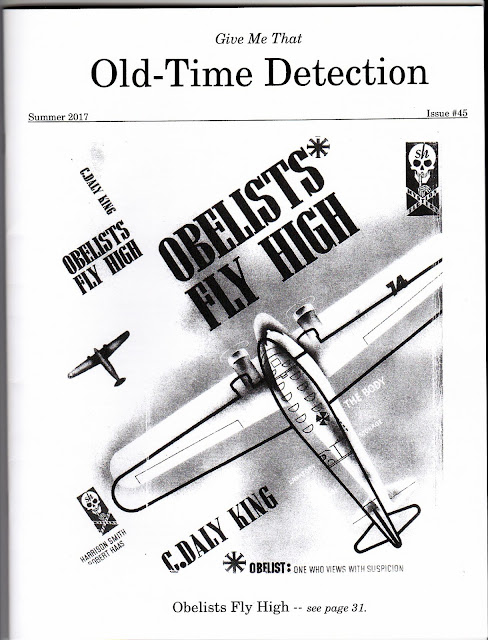 WE always look forward to the next issue of OLD-TIME DETECTION because not only is there always something about detective fiction in it that's new to us, but also older items
that allow us to indulge our weakness for nostalgia, and this issue is no exception.
Between its covers you can find: Michael Grost's best picks of the forties and fifties; Dr. John Curran's latest about what's going on in the world of Agatha Christie, including a discussion of an awful film adaptation (1928) of a Harley Quin story; and Martin Edwards's take on his new book, The Story of Classic Crime in 100 Books.
There's an Inspector Mallett short short short story by Cyril Hare that hasn't seen publica-tion for eight decades, enchanced with Tony Medawar's comments; Francis M. Nevins's take on The Leopard Man (1943), a significantly altered filmed version of a Cornell Woolrich novel; and J. Randolph Cox's substantial article about Robert Barnard (1936-2013).
Finally there's Michael Dirda's review of a book about Fergus Hume's famous The Mystery of a Hansom Cab (1886), the one that, profit-wise, got away from him; Charles Shibuk's list of classic mysteries that deserve reprinting; and thoughtful reviews and commentary from Shibuk, Jon L. Breen, Trudi Harrov, Amnon Kabatchnik, and Arthur Vidro.

(3) Christie Corner, by Dr. John Curran:
"If you thought that the travestying of literary material was a relatively new phenomenon well . . . think again, as the film was an unrecognizable hodgepodge of nonsense, sacrificing the neatness of Christie's story to a melodramatic scenario of thwarted love, preposterous disguises, and absurd plot developments." — (HERE) 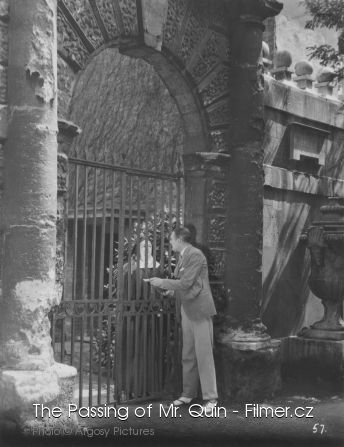 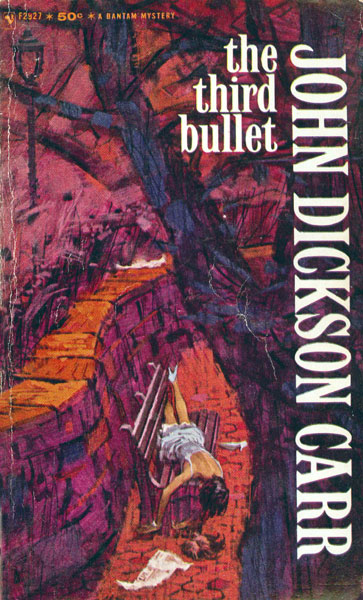 (5) New Non-fiction:
~ The Story of Classic Crime in 100 Books, by Martin Edwards:
". . . takes the story of classic crime a step further, by exploring the way it changed over the course of fifty years. Along the way, I look at tropes such as 'the locked room mystery,' 'the country house mystery,' 'dying message clues,' and much else besides. I've not confined myself simply to rounding up the usual suspects." — (HERE)

(6) Thirty-Five Years Ago, by Jon L. Breen (1983):
"Fortunately for their readers, many writers of mystery and detective fiction have had both long lives and long careers. Many of the masters of the twenties and the thirties continued
to produce new books into the seventies." — (HERE), (HERE), and (HERE). 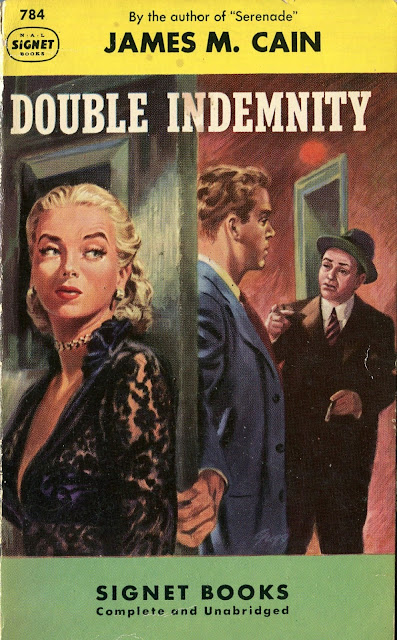 (8) Serendip's Detectives XVII: Mallett's Last Blow, by Tony Medawar:
"Contrary to the stereotypes of the genre, at least in the Golden Age, [Inspector] Mallett is no fool. Though stolid and solid in appearance, he can fairly be described as one of the smartest police detectives in the whole of crime and mystery fiction." — (HERE) 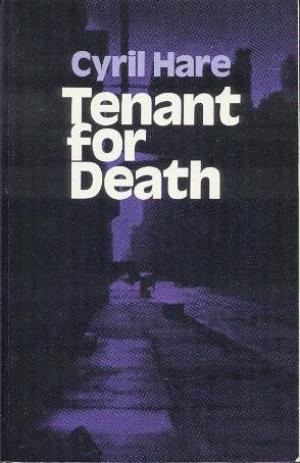 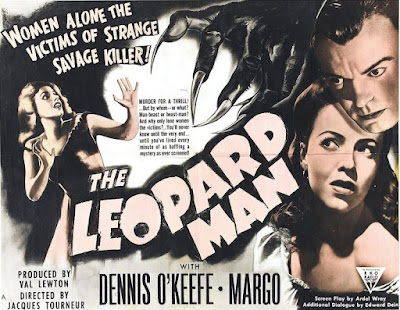 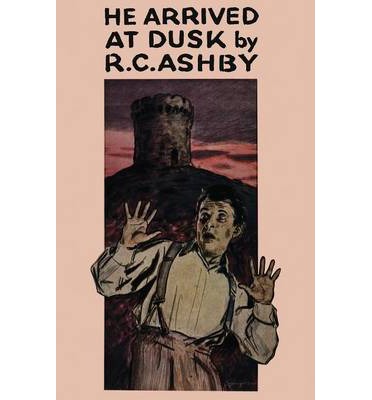 (11) Big Feature:
~ Robert Barnard, by J. Randolph Cox (2003, 11 pages):
"Barnard has been called a more sophisticated Agatha Christie; yet, unlike Christie's work, his novels are driven by characterization and satire rather than plot and, consequently, prove satisfying even when the detection itself is weak." — (HERE) and (HERE) 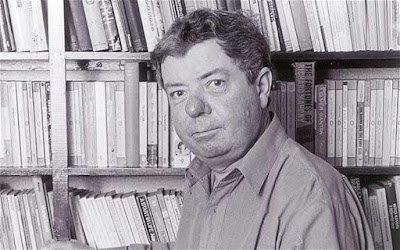 (12) Mega-Review:
~ Blockbuster! Fergus Hume and 'The Mystery of the Hansom Cab' (2015), reviewed by Michael Dirda (2016):
". . . in this engrossing study [author Lucy] Sussex is less concerned with the merits of Hansom Cab than with its creation, publication, and marketing." — (HERE) and (HERE) 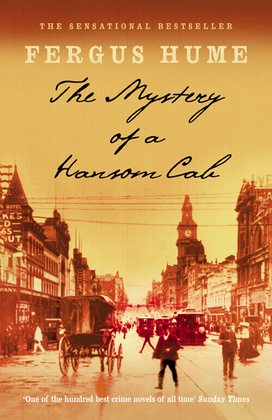 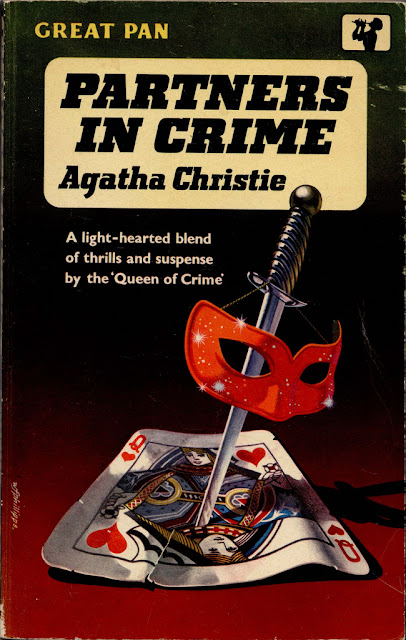 ~ A Bid for Fortune, or Dr. Nikola's Vendetta (1895), reviewed by Amnon Kabatchnik (1973):
"His [Guy Boothby's] cornerstone contribution is the creation of Dr. Nikola, probably the first series arch-villain in literature." — (HERE), (HERE), and (HERE) 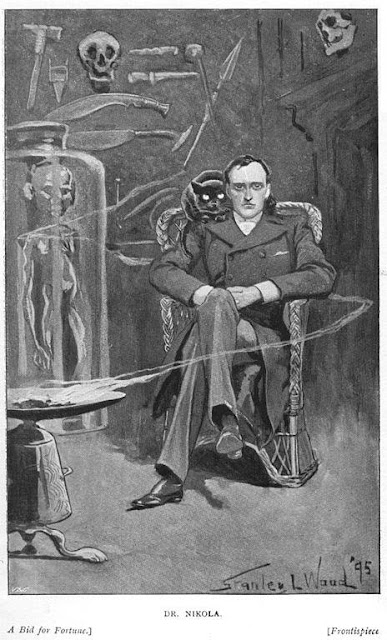 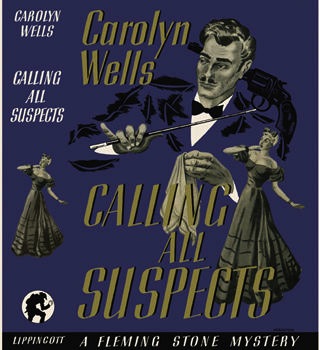 ~ Someday the Rabbi Will Leave (1985), reviewed by Arthur Vidro:
"Kemelman does his usual professional job of blending diverse personalities and interests with a lethal crime and letting the rabbi solve the case." — (HERE) 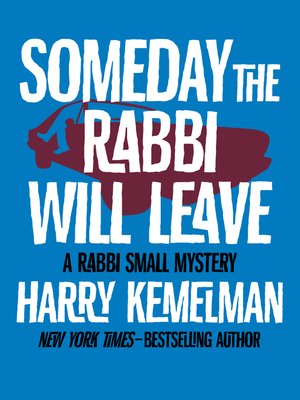 ~ Obelists Fly High (1935), reviewed by Arthur Vidro:
"Compared to the above-mentioned trio [of Christie, Carr, and Queen], [author C. Daly] King's output was slim; but his quality often gave them a run for their money." — (HERE)
and (HERE) 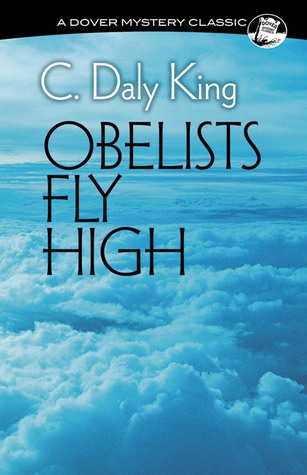 (14) Neglected but Recommended, by Charles Shibuk:
". . . these novels are of high merit and are worthy of reprint." 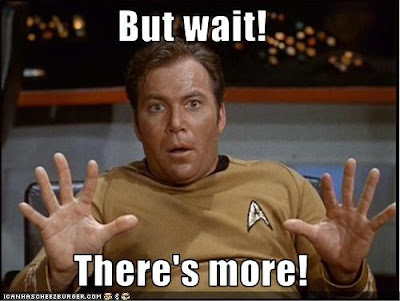 JUST A QUICK NOTE to let our regular readers know we're still here, as it's been well over a week since we last posted. Uncertainty about the path of Hurricane Irma and other considera-tions have kept us pretty busy, but we should be back to abnormal soon. Thanks to all of you for sticking with us.
Posted by Mike Gray at 9:57 AM No comments:

The Top 5 in July 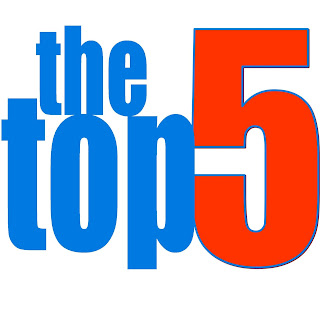 Herewith is our belated Top 5 list for July 2017, as well as for most of the previous few years ONTOS has been around. The older the posting the more likely there won't be anything at the end of certain hot links that you'll see there, something we find as deplorable as you no doubt do, but that seems to be the nature of the Internet beast. Sic transit . . .


~ July 2017 ~
(1) Salmagundi—Number Two - (HERE)
(2) "It Was with Something of a Shock That I Found Myself Looking Directly Along the Barrel of a .45 Automatic Pistol" - (HERE)
(3) "It Is the Cleverest Criminal Who Always Makes the Most Striking Blunder" - (HERE)
(4) Miscellaneous Monday—Number Sixteen - (HERE)
(5) "It Is Surprising, Then, That a Scholar of This Type Should Stoop to the Lowly Murder Yarn" - (HERE)


~ July 2014 ~
(1) "These Stories Are, Altogether, More Amusing Than Intriguing" - (HERE)
(2) "Although This Is an Eccentric Book, It Has Plenty of Plus Points" - (HERE)
(3) "Scenery Is Delightful, Writing Good, Sleuth Clever, and Criminal Elusive" - (HERE)
(4) "It Is a Negligible Affair, a Chip in Porridge, an Eloquent Sermon on the Old Text" - (HERE)
(5) "Dogmatic Detectival Pronouncements, Half-wrong and Half-right" - (HERE)


~ July 2016 ~
(1) The Locked Room Mystery in the Mid-Twentieth Century (with One from the Twenty-first) - (HERE)
(2) "We Both Went Down Onto the Bare Boards of the Stage and Didi Cheri, Still Yelling, Jumped on Top of Both of Us" - (HERE)
(3) "This Here West Coast Publicks a Bunch a Crooks" - (HERE)
(4) "Why Do You Humans Prey on One Another, in This and So Many Other Phases of Life?" - (HERE)
(5) "As He Died—by Accident or Design—or Maybe Just That Bad Luck Which Works Against Every Murderer—He Branded You" - (HERE)
Posted by Mike Gray at 10:36 AM No comments: 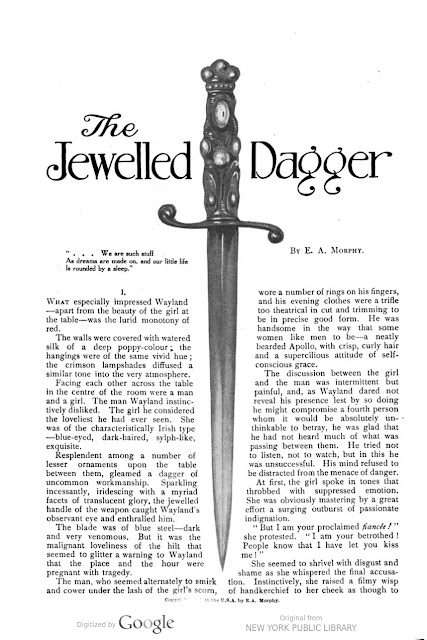 Peter Wayland has met the girl of his dreams—"for him at all events, this was the most beautiful creature the world ever saw." If only she hadn't stabbed that other guy . . . 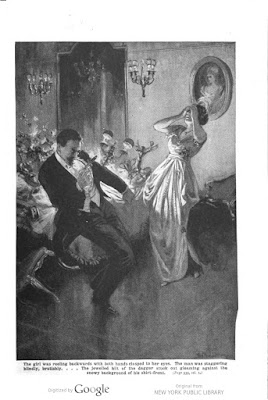 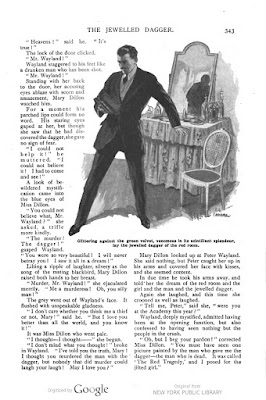 The bottom line: "Is this a dagger which I see before me?"
— Macbeth
Posted by Mike Gray at 10:10 AM No comments: