Long before Perry Mason, detective-lawyers were solving cases on their own, sometimes saving the taxpayers millions in court costs. One such was Mr. Ashley Tempest with his "Paul Drake", Yardley, the creations of A. C. Fox-Davies.

Our author was, according to Wikipedia, proficient in several fields:


Arthur Charles Fox-Davies (28 February 1871–19 May 1928) was a British author on heraldry. By profession, he was a barrister but he also worked as a journalist and novelist. . . . In addition to his writings on heraldry, he published a number of works of fiction, including detective stories such as The Dangerville Inheritance (1907), The Mauleverer Murders (1907) and The Duplicate Death (1910).

A mild disagreement with Conan Doyle led to his interest in detective fiction, at least according to this source:


The English writer, Mr. A. C. Fox-Davies, came to write fiction in a rather curious fashion. He was an authority on heraldry, the editor of Fairbirn's Book of Crests, of Dod's Peerage, and of a number of books relating to genealogies and armorial bearings.

One day he stumbled on Conan Doyle's "Sherlock Holmes" stories and became greatly interested. As a barrister, however, he did not always agree with Doyle's conclusions, and he wrote a sequel to one of the stories putting the criminal in it on trial and getting him acquitted on Sherlock Holmes's own facts.

He sent this to Conan Doyle, who complimented him on it and suggested that he should write a series of his own. He wrote instead The Mauleverer Murders and then The Dangerfield Inheritance. — "Chronicle and Comment: The Conclusions of Sherlock," THE BOOKMAN (March 1911)

Here are what appear to be most, but perhaps not all, of Fox-Davies's detective novels: 
A Dangerville Inheritance, by A. C. Fox-Davies, is such a preposterous tale that one feels no scruple in disregarding the accepted ethics in reviewing detective stories, and bluntly revealing the secret on which the whole plot hinges. Indeed, it is no very serious betrayal, because the perspicuous reader can hardly fail to guess the truth from the opening chapter.

The heir presumptive to the Dangerville estates has for years been impatiently awaiting the decease of the old Earl of Dangerville, when news comes from Paris that the latter has taken a young wife, and that a son and heir has been born. The only inaccuracy about the news is in regard to the sex of the child, who happens to be a girl instead of a boy. But the secret is carefully guarded by the Earl, who takes a grim pleasure in keeping the relative he hates out of the inheritance.

The supposed heir eventually comes into the title and the property, enters Parliament, wins renown for brilliant statesmanship, and crowns the fraud by finding another woman who is willing to go through the mockery of a ceremony and masquerade before the world as the Earl of Dangerville's wife.

This other woman is already secretly married; and the fact that the real husband becomes implicated in a baffling murder case drags so many peculiar and questionable happenings into daylight, that the only way to check the growing scandal is to make a full confession. As already intimated, the whole story is too preposterous to be taken seriously. — Frederic Taber Cooper, "Heroines in Fiction and Some Recent Novels," THE BOOKMAN (June 1907; go to page 393, top left) 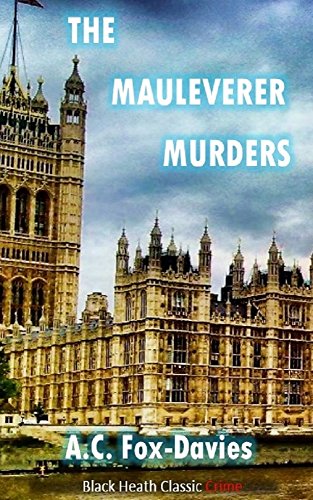 One critic considered this one "very sensational"; another was less than impressed:

This is an instance of an introductory novel being written later than its sequel; but those who have not read "The Dangerville Inheritance" will find the present work absolutely complete in itself.

As a detective story the book suffers a little from the same thread of interest not being sustained all through. For the first third, roughly speaking, of the volume the whole problem is the detection of the person who committed the Mauleverer murders.

But from the moment of the arrest of the heroine the interest is transferred to the possibility of proving her innocence. It must be owned that the Duchess of Merioneth, alias Miss Vivian Vane, is not a very attractive person, and the reader finds his attention flag when the main question appears to be not to discover the guilty person, but to free the masquerading Duchess.

The end of the story is brutally horrible, and we are not convinced by the author's production of the real criminal. The book is very sensational, but the reader cannot complain that the title does not give him full warning of this fact. — THE SPECTATOR (31 August 1907)

Mr. Fox-Davies has constructed his story on the principle laid down by the eminent literary light Mr. Archibald Clavering Gunter—that is, something must happen every five hundred words. Beginning with the title, the author furnishes us with a thrill if not in every line, certainly on every page. The plot does not unfold: it rolls up and accumulates like a snowball, and, having opened with five impromptu funerals in the first six chapters, closes with one more, and one in perspective ten or twelve chapters later.

The heroine is introduced thus: "Who's that, Alan? When one is out of England so much, one loses touch with the new beauties."

"Well, if you want to know, she's a mystery"—in these few spirited words Mr. Fox-Davies puts the experienced novel reader "on" at once, and it would be a pity to diddle that worthy out of a series of agreeable shocks by revealing too much of the plot.

The heroine leads a double life, and is suspected of leading a triple or quadruple one. Sums like £150,000 are juggled with airily as feathers; the properties include—bicycles, revolvers, knotted cords, strychnine (wholesale), perfumed handkerchiefs, half-destroyed letters, watches stopped at dreadfully significant hours, and the southeast European kingdom of Moritania—royal line extinct. There is a detective who is not likely to displace Sergeant Cuff or Mr. Sherlock Holmes in our affections, and the mystery is so deep by the one hundred and forty-first page that the author himself is compelled to remark:

"Accustomed as he was to startling assertions and unexpected developments, even he could not, at a few moments' notice, readjust his ideas to an entirely new conception of the whole case."

This critic considered Fox-Davies to be "a natural master of story-telling":


THERE is an undoubted talent for the Gaboriau style of detective story—a baffling plot pursued through a number of chapters, and unravelled by an investigator who is not above making mistakes at the outset—about Mr. Fox-Davies.

This is a murder mystery of considerable ingenuity, coloured in something of the old Adelphi style, and without much attempt at literary value.

The author has introduced us to his detective before, and it is a relief to find that the cold infallibility of the more modern "criminal agent" of fiction has not destroyed our taste for the more commonplace and convincing cleverness of Mr. Yardley.

Mr. Fox-Davies's imagination, in fact, though forcible enough, never moves outside the conventional rut of a Londoner's life.

There is a good deal of well-managed legal business in the book, and Mr. Ashley Tempest's cross-examining is a triumph of professional cunning.

On the whole, Mr. Fox-Davies may be welcomed as a natural master of story-telling pure and simple. He serves his narrative raw, but it is real narrative. — THE OUTLOOK (August 17, 1907) 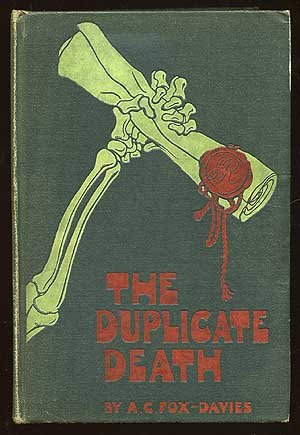 A contemporary feels he can "strongly recommend" this one, while another critic finds it "long and tiresome":


In his latest novel Mr. Fox-Davies once again introduces his remarkable barrister, Ashley Tempest, and that gentleman's ingenious assistant, the private detective Yardley. They again have a problem to work upon which is fully worthy of their powers; indeed, this time it may fairly be said to have been somewhat beyond them.

The book centres around the mystery of a murder, for which no fewer than three different men are tried. The trouble is that there is an excellent case against each one of them, but Mr. Fox-Davies has set out to show the unreliability of purely circumstantial evidence, and show it he does, even at the expense of his hero.

"The Testament of John Hastings" presents a problem which is not entirely unsolvable, and the book is none the worse for that, but we are quite sure that not one reader in ten will arrive at the correct solution before the author sees fit to supply it.

We can strongly recommend Mr. Fox-Davies's remarkable mystery story. It is a wonderful book in its way. — "Novel Notes," THE BOOKMAN (February 1911)

This is the story of a murder as to which, after hanging the supposed criminal, the authorities have qualms, imagining that they have executed the wrong man. Accordingly they proceed to accuse two others. There are, therefore, no fewer than three trials of persons accused of committing the murder. This is bound to prove not a little tedious.

A real cross-examination is not always interesting reading, and the imitation article is apt to be long and tiresome. The account of the riots in South Wales, instigated by German spies, and the defeat of these latter by the Secret Service agents, is exciting; but, there is no one person in the story in whom it is possible to take any real interest. — THE SPECTATOR (25 March 1911)