"It Helped To Be a Librarian Who Liked Detective Stories"

THERE WERE TWO stories in Analog back in the '60s featuring an interesting character called the Librarian who, in the performance of his duties, is of necessity also a Cultural Ambassador. We're including the first story, which doesn't have a conventional criminous theme but does have the Librarian in hot water with the local authorities, because it intro-duces Quist and Bookworm, whose next and last adventure has them in deep danger up to their Dewey Decimals . . .

----------
"Remember that as Librarians you carry with you a sacred trust, the future of the human mind." 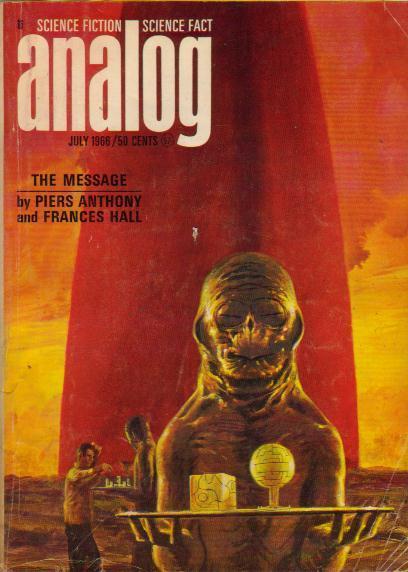 "A librarian seems an odd sort to raise general hallelujah and trouble—but the librarian was a little special, and his library a highly dynamic type. Very dynamic!"

The planet Rayer is "like a mad combination of Seventeenth and Twentieth Century London with the hygiene standards of the Fifteenth thrown in, well endowed with poverty but poor in intelligence" and inhabited by people who just don't seem to care, a state of affairs dictated and maintained by a totalitarian government that, for one thing, encourages book burning; aiming to do something about the situation, the Librarian finds himself plotting a course of action that he never imagined he would have to do when he first arrived on Rayer: "Excuse me, sir, but what's a . . . a rev-o-lution?"

Major characters:
~ Stephen Quist:
"He had thrown things at the computer before and knew just where to aim."
~ Bookworm, Mark 18:
"I've got everything they ever put into me. I'm the original junk yard."
~ The thin man:
"Burn the lot."
~ Jonrad, the young man:
"It doesn't do to take risks."
~ Cassill, the grim-faced man:
"We live like animals; no, worse than animals, because our books are confiscated and burned, our movements watched all the time. We are slaves . . ."
~ The lieutenant:
". . . made a decision, the speed of which was a tribute to the fear the dictator inspired
in his minions."

Typo: "one of the soliders".

Resources:
- Astronomical references in the story include Dubhe (Alpha Ursae Majoris), discussed in Wikipedia (HERE), and an "unnamed star NGC 5548, known locally as New Sol," which is totally wrong since the New General Catalog listing for number 5548 designates a galaxy,
not an individual star, an error that the technophilic Analog editors should have caught;
see Wikipedia (HERE). 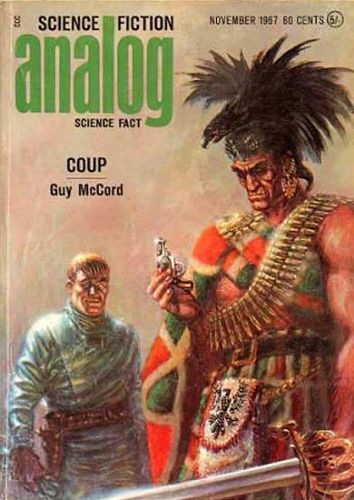 "The real advantage of an education shows up when the guy you're working against doesn't have one and you do. Like the librarian, with his Bookworm Computer for memory—and a highly advanced education in Whodunits Down Through The Ages!"

It's a boring milk run, "another dreary visit" to the planet Napoleon 6, a "dead-end world," for Quist of the Librarian Service and his AI, Bookworm—that is, until somebody takes a shot at him: "Quist looked down incredulously at the blood staining the now tattered sleeve of his coat. Before he fainted, his mind had time to be grateful that the marksman had read detective stories, too. The first shot was always a warning. . . ."

Major characters:
~ Quist:
"In the world of private eyes and beautiful blondes he felt more at home. At least there people did things."
~ Bookworm:
"If a librarian couldn't trust his Bookworm, then who could he trust? Except perhaps his own intuition."
~ Addison:
"Quist ran towards him but the bearded man was like a rabbit . . ."
~ Marcus Obolensky:
". . . had no more fear of death than has a tree."
~ The nervous little man:
". . . lay like a suppliant, face down before the cratered stone."
~ The girl:

"Somebody knocked on the door. It sounded like the knock of a beautiful blonde, about
five feet four, with a full figure, a seductive smile, and a twinkle in her eye."
~ The cop:
"When the door opened, Quist knew what to expect. Policemen are much the same all
over the universe."

". . . lanes along which dark and crooked buildings leaned their heads together and
spoke in shadows."
"Squeezed between two other office blocks, it cowered in the shadows, poking one
shy corner of its facade out into the slanting afternoon sun."
"They were a jungle of vines and reeds that rioted across the paths, shouldering the
marble slabs out of their way with slow arrogance."

Comment: With his ability to channel his inner Philip Marlowe, the Librarian had real potential of getting himself involved in further adventures, but these two stories seem
to be the only ones featuring him.

Resources:
- Our "author," Martin Loran, was really two people, Australian John Martin Baxter (Wikipedia HERE; the SFE HERE; and the ISFDb HERE) and Ronald Loran Smith (the ISFDb HERE).
- "There were a thousand ways to die on Napoleon 6." Terraforming (since 1967, when our story was published, the term has lost its hyphen) is an event in search of some place to happen; see Wikipedia (HERE; "Terraforming") and (HERE; "Terraforming in popular culture"); Peter Ahrens's paper "The Terraformation of Worlds" (HERE; PDF); and Martyn J. Fogg's "The Terraforming Information Pages" (HERE), from which we quote:

"Terraforming is a process of planetary engineering, specifically directed at enhancing the capacity of an extraterrestrial planetary environment to support life. The ultimate in terraforming would be to create an uncontained planetary biosphere emulating all the functions of the biosphere of the Earth—one that would be fully habitable for human beings." 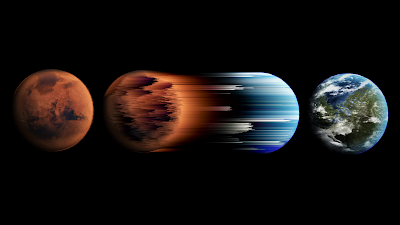