"I Don't Know What's Going To Break Loose—or When"

IT'S LIKELY THAT Bartolomeo Cristofori had no idea just what nefarious uses his invention could be put to; centuries later such revelations would fall to a . . .
"Deep Sea Detective."
By Clarence Herbert New (1862-1933). 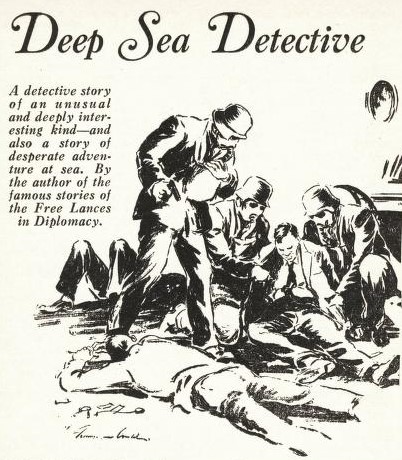 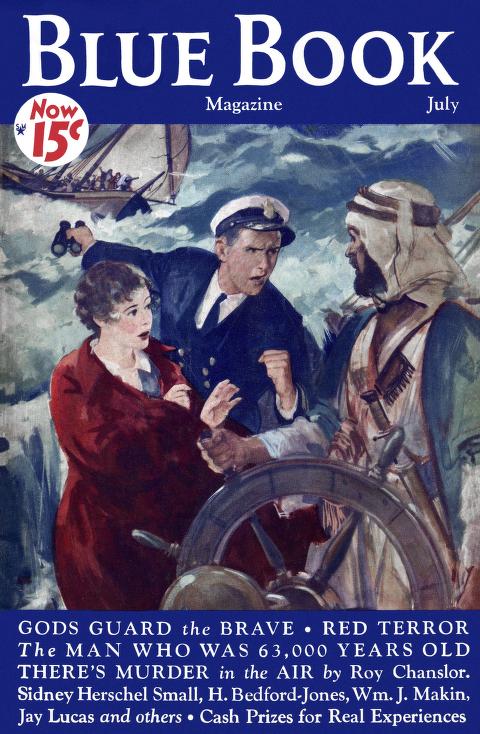 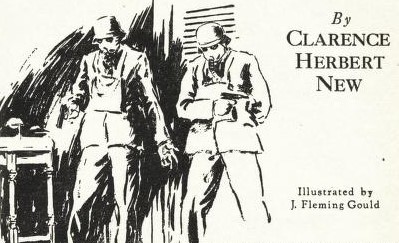 ". . . this damned unusual shipment of pianos—a hundred-and-three
of 'em . . ."
For Coffin there's just something not right about this situation, and he's willing to go a long, long way to prove it . . . . 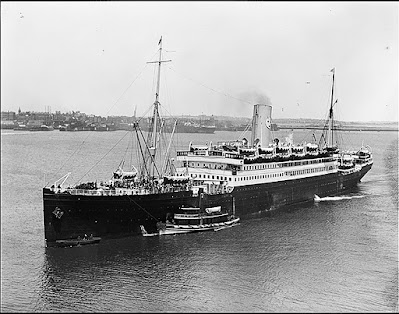 Main characters:
~ Captain Hardinge:
". . . was contemptuously starting to say it would have to wait until morning—when he suddenly felt an automatic jammed against his stomach."
~ Sir Edward Coffin:
"I'd rather look like a bally ass, any time, than be sorry I hadn't sense enough to look out for squalls in a dead calm!" 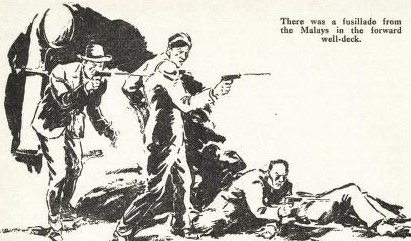 ~ Francis Yelverton:
"What do you imagine the mystery about those pianos may be?"
~ The Rajah of Bundlecore:
". . . not only had ordered them, but actually had an agent on the spot to pay the freight."
~ Alworthy:
"I know perfectly well you'd not make such a request without good reason."
~ Innes:
"'Tis a grrand idea!"
~ Cathie Ledyard:
"He's very nice—nothing seems to worry him."
~ Bridges:
"If we only 'ad a shootin'-iron or so—" 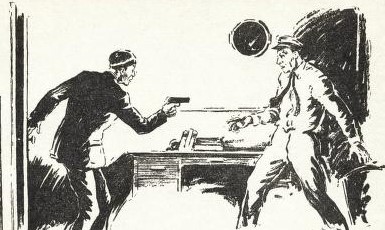 References and resources:
- "the Burmese border": Burma had a controversial name change in 1989, and last February a regime change as well: "Burma, officially the Republic of the Union of Myanmar, is a country in Southeast Asia. Myanmar is bordered by Bangladesh and India to its northwest, China to its northeast, Laos and Thailand to its east and southeast, and the Andaman Sea and the Bay of Bengal to its south and southwest." (Wikipedia HERE).
- "the Federated States": "The Federated States of Micronesia are located on the Caroline Islands in the western Pacific Ocean. The history of the modern Federated States of Micronesia is one of settlement by Micronesians; colonization by Spain, Germany, and Japan; United Nations trusteeship under United States-administered Trust Territory of the Pacific Islands; and gradual independence beginning with the ratification of a sovereign constitution in 1979." (Wikipedia HERE).
- "the coolie trade": "A coolie (also spelled koelie, kuli, cooli, cooly, or quli) is a low-wage laborer, typically of Asian descent. The term is considered outdated and offensive." (Wikipedia HERE).
- "the purchasing agents": "Buying agents or purchasing agents are people or companies that offer to buy goods or property on behalf of another party. There are agents for all kinds of products, from raw material commodities through to specialized custom equipment." (Wikipedia HERE).
- "near the Lloyd's Buildings": In the insurance world Lloyd's is a strange duck: "Lloyd's of London, generally known simply as Lloyd's, is an insurance and reinsurance market located in London, United Kingdom. Unlike most of its competitors in the industry, it is not an insurance company; rather, Lloyd's is a corporate body governed by the Lloyd's Act 1871 and subsequent Acts of Parliament. It operates as a partially-mutualised marketplace within which multiple financial backers, grouped in syndicates, come together to pool and spread risk. These underwriters, or 'members,' are a collection of both corporations and private individuals, the latter being traditionally known as 'Names'." (Wikipedia HERE).
- "the wharf at Penang": At the time of our story Penang was still part of the British Empire: "Penang's modern history began in 1786, upon the establishment of George Town by Francis Light. Penang formed part of the Straits Settlements in 1826, which became a British crown colony in 1867. Direct British rule was only briefly interrupted during World War II, when Japan occupied Penang; the British retook Penang in 1945. Penang was later merged with the Federation of Malaya (now Malaysia), which gained independence from the British in 1957. Following the decline of its entrepôt trade towards the 1970s, Penang's economy was reoriented towards hi-tech manufacturing." (Wikipedia HERE).
- "taken from German prisoners during the war": "World War I or the First World War, often abbreviated as WWI or WW1, was a global war originating in Europe that lasted from 28 July 1914 to 11 November 1918. Contemporaneously known as the Great War or 'the war to end all wars', it led to the mobilisation of more than 70 million military personnel, including 60 million Europeans, making it one of the largest wars in history. It also was one of the deadliest conflicts in history . . ." (Wikipedia HERE).
- "the coaming of the boat-deck": "Coaming is any vertical surface on a ship designed to deflect or prevent entry of water. It usually consists of a raised section of deck plating around an opening, such as a cargo hatch. Coamings also provide a frame onto which to fit a hatch cover." (Wikipedia HERE).
- "a Marconi employee": At the time telegraph operators aboard ships were not directly employed by the shipping line but by Marconi International Marine Communication Co. (M.I.M.C.Co.), which was founded in 1900 in London. (Wikipedia HERE).
- "a twelve-valve American set": In the U.S. they're commonly called something else:
"A vacuum tube, an electron tube, valve (British usage) or tube (North America), is a device that controls electric current flow in a high vacuum between electrodes to which an electric potential difference has been applied." (Wikipedia HERE).
"In manual radiotelegraphy the sending operator manipulates a switch called a telegraph key, which turns the radio transmitter on and off, producing pulses of unmodulated carrier wave of different lengths called 'dots' and 'dashes', which encode characters of text in Morse code." (Wikipedia HERE).
- "the average D/F station ashore": "Direction finding (DF), or radio direction finding (RDF), is the measurement of the direction from which a received signal was transmitted." (Wikipedia HERE and HERE).
- "shove in the kris": "The kris or keris in Indonesian languages, is an Indonesian asymmetrical dagger with distinctive blade-patterning achieved through alternating laminations of iron and nickelous iron (pamor). The kris is famous for its distinctive wavy blade, although many have straight blades as well, and is one of the weapons commonly used in then pencak silat martial art native to Indonesia." (Wikipedia HERE). 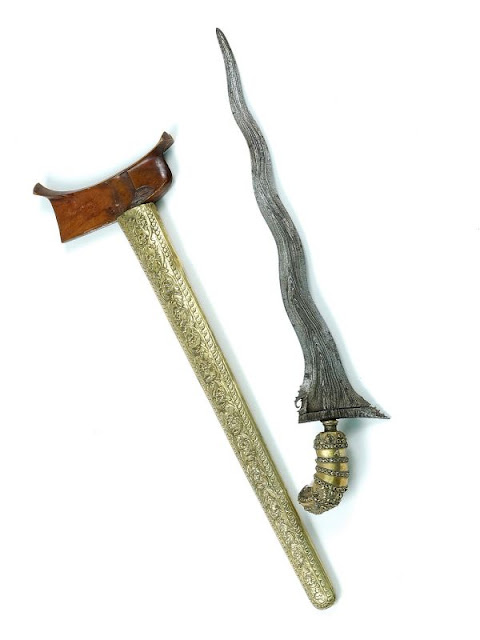 - "annoy British Raj": The Raj was "the rule by the British Crown on the Indian subcontinent from 1858 to 1947. The rule is also called Crown rule in India, or direct rule in India. The region under British control was commonly called India in contemporaneous usage . . ." (Wikipedia HERE).
- "in the fo'c'stle": "The forecastle (contracted as fo'c'sle or fo'c's'le) is the upper deck of a sailing ship forward of the foremast, or the forward part of a ship with the sailors' living quarters. Related to the latter meaning is the phrase 'before the mast' which denotes anything related to ordinary sailors, as opposed to a ship's officers." (Wikipedia HERE).
- "after tiffin": "Tiffin is an Indian English word for a type of meal. It refers to a light tea-time meal at about 3pm, or to a light breakfast consisting of typical tea-time foods. In certain parts of India, it can also refer to the midday luncheon or, in some regions of the Indian subcontinent, a between-meal snack. When used in place of the word 'lunch,' however, it does not necessarily mean a light meal." (Wikipedia HERE).
- "Bay of Bengal": "The Bay of Bengal is the northeastern part of the Indian Ocean, bounded on the west and northwest by India, on the north by Bangladesh, and on the east by Myanmar and the Andaman and Nicobar Islands of India." (Wikipedia HERE). 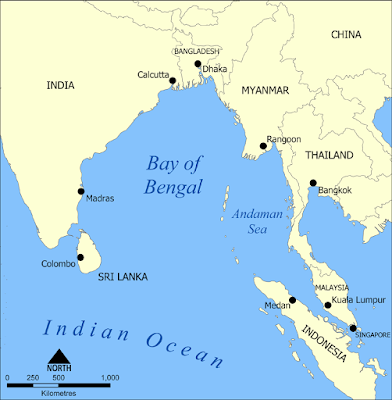 - "Malay pirates": Piracy in that region goes back centuries: "The Strait of Malacca's geography makes the region very susceptible to piracy. It was and still is an important passageway between China and India, used heavily for commercial trade. The strait is on the route between Europe, the Suez Canal, the oil-exporting countries of the Persian Gulf, and the busy ports of East Asia. It is narrow, contains thousands of islets, and is an outlet for many rivers, making it ideal for pirates to evade capture." (Wikipedia HERE).
- "the lee gangway": "Leeward is the direction downwind (or downward) from the point of reference. The leeward region of mountains generally remains dry as compared to the windward. The side of a ship that is towards the leeward is its lee side." (Wikipedia HERE). "A gangway is a narrow passage that joins the quarterdeck to the forecastle of a sailing ship. The term is also extended to mean the narrow passages used to board or disembark ships." (Wikipedia HERE).
- "in the scuppers": "Ships have scuppers at deck level, to allow for ocean or rainwater drain-off." (Wikipedia HERE).
- "a capstan-bar": "A capstan is a vertical-axled rotating machine developed for use on sailing ships to multiply the pulling force of seamen when hauling ropes, cables, and hawsers." (Wikipedia HERE).
- "Stateroom Number Thirty": "On board a ship, the term state room defines a superior first-class cabin." (Wikipedia HERE and HERE).
- "His Majesty's destroyer": "During the 1920s and 1930s, destroyers were often deployed to areas of diplomatic tension or humanitarian disaster. British and American destroyers were common on the Chinese coast and rivers, even supplying landing parties to protect colonial interests." (Wikipedia HERE). "His Majesty" at the time was King George V. (Wikipedia (HERE). 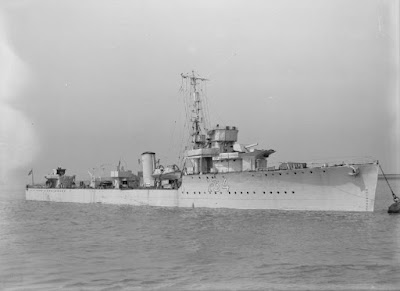