"No Sane Man Committed This Crime"

WHEN DREAMERS STARTED talking about flying safely through the air they were greeted with nearly universal skepticism; after all, airplanes are heavier than the air they're supposed to pass through, and everybody knows what that means. In today's story, though, we have someone who knows only too well how an airplane works, well enough to make sure that if it does get into the air it won't stay there very long . . .
"Flat Spin."
By Grange Lewis (?-?). 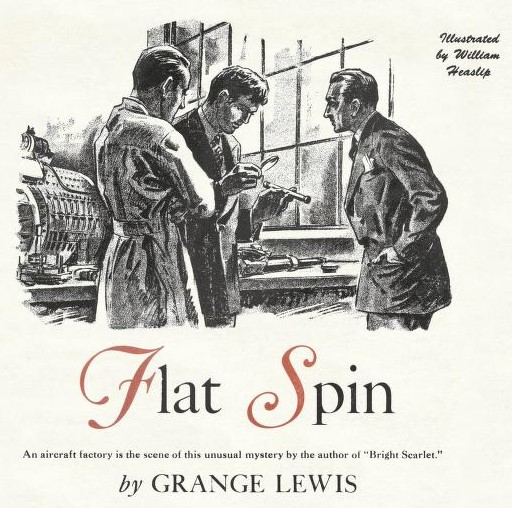 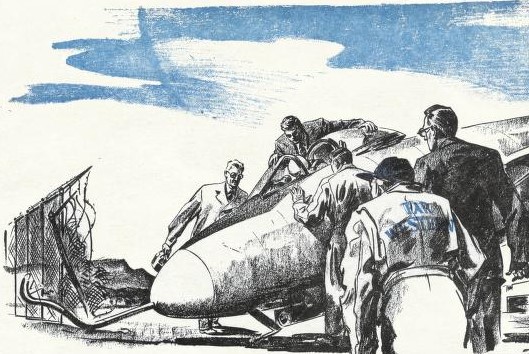 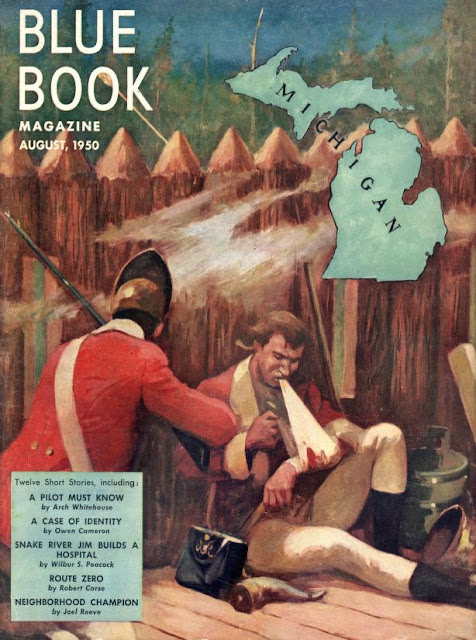 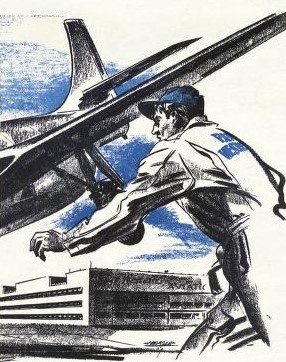 "He's dead. I suppose you'll want to get him out of here now?"

World War II saw the large-scale application of the jet engine to the airplane, starting a stampede of aircraft companies trying to develop newer and faster jets that, even now, has never really abated. Big contracts, some of the biggest being offered by the government, awaited the corporations that could devise planes meeting civilian and government specs, producing a situation ripe for domestic industrial—as well as foreign—espionage and, possibly, sabotage. Spence Hurley, an engineer with Far Western Aviation, is about to find out just how ripe—and deadly—that situation is . . . . 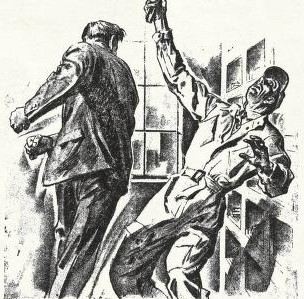 Principal characters:
~ Spence Hurley:
"So far, the whole affair was a bewildering mystery—to me, anyway."
~ Bob Hughson:
"I've never handled a sabotaged ship before, but man, have I got one on my hands now!"
~ Richard Leavitt:
"Tell him to use his 'chute and let the plane go."
~ Joe Robb:
"In short, what went wrong with the XF?"
~ Matt Comstock:
". . . what the bad blood was, I couldn't say."
~ Duncan Basoldi:
"I tell you, that XF was our baby, our sweetheart."
~ James Bassett:
"As chief engineer of an aircraft company, I made an unforgivable error in stress analysis which resulted in our going bankrupt."
~ Stan Murphy:
"It looks like 'HA-HA'."
References and resources:
- "Flat Spin": Never go into one unless you have lots and lots of air under you: "Flat spin occurs when both rotation around the yaw axis and side-slip dominate, and the nose attitude raises to level, or nearly so, resulting in the aircraft assuming a Frisbee or boomerang-like motion. Normal spin recovery techniques are ineffective due to lack of rudder authority. If entered due to a center of gravity located aft of manufactur-er's published limits, the spin may be unrecoverable. Some aircraft are difficult or impossible to recover from a spin, especially a flat spin." (Wikipedia HERE).

- "went into a hammerhead stall": An aerobatic maneuver that isn't necessarily unintentional: "A Hammerhead (also known as a stall turn) is performed by pulling the aircraft up until it is pointing straight up (much like the beginning of a loop), but the pilot continues to fly straight up until their airspeed has dropped to a certain critical point. The pilot then use the rudder to rotate the aircraft around its yaw axis until it has turned 180 deg and is pointing straight down, facing the direction from which the aircraft came. The aircraft gains speed, and the pilot continues and returns to level flight, travelling in the opposite direction from which the maneuver began. It is also known as a 'tailslide,' from the yawing turn, which is different from the typical method of turning an aircraft in the pitch axis." (Wikipedia HERE). 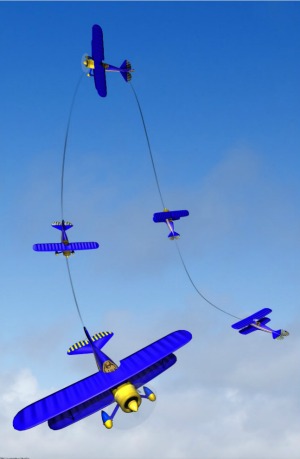 - "if the XF didn't pan out, it meant the end for our company": "The aircraft industry is the industry supporting aviation by building aircraft and manufacturing aircraft parts for their maintenance. This includes aircraft and parts used for civil aviation and military aviation. Most production is done pursuant to type certificates and Defense Standards issued by a government body. This term has been largely subsumed by the more encompassing term: 'aerospace industry'." (Wikipedia HERE). 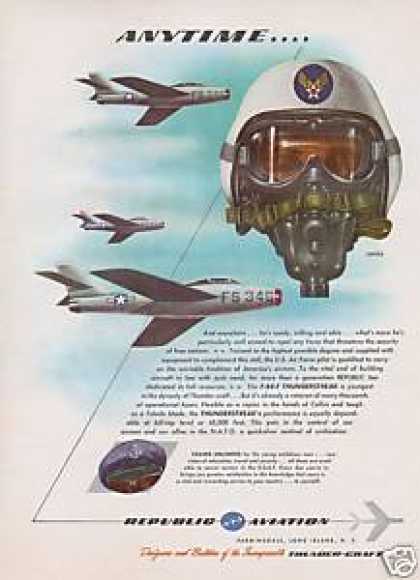 - "The jet was just too hot": With an exhaust gas temperature of around 1,300 degrees Fahrenheit, "hot" perfectly describes a jet. (Wikipedia HERE).

- "fishtailing like mad": "FISHTAILING - A rudder-controlled side-to-side [yawing] motion to reduce air speed, generally prior to landing." (MiMi HERE).
- "the Plexiglas canopy": Technically the substance is called poly(methylmethacrylate): ". . . a transparent thermoplastic often used in sheet form as a lightweight or shatter-resistant alternative to glass. Historically, PMMA was an important improvement in the design of aircraft windows, making possible such designs as the bombardier's transparent nose compartment in the Boeing B-17 Flying Fortress. Modern aircraft transparencies often use stretched acrylic plies." (Wikipedia HERE). 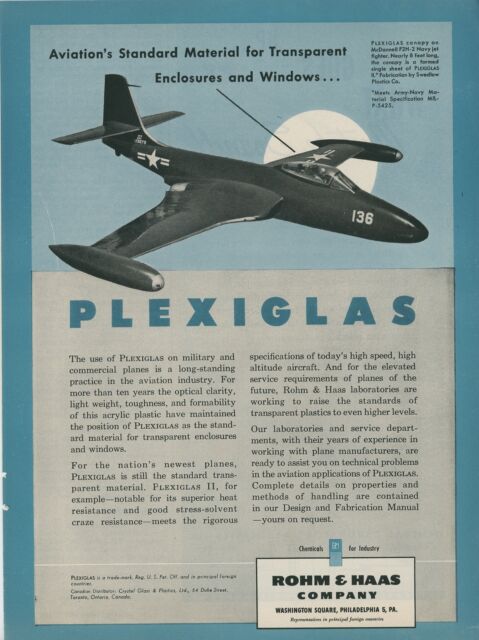 - "the hydraulic pump": "Hydraulic pumps are used in hydraulic drive systems." (Wikipedia HERE).
- "when the FBI gets on the scene": Since Western Aviation's XF is evidently intended for military use, the FBI's involvement would be understandable. (Wikipedia HERE).
- "a CAA inspector": The Civil Aeronautics Authority, from 1938 to 1958 the precursor to the FAA: "In 1940, President Franklin D. Roosevelt split the authority into two agencies, the Civil Aeronautics Administration and a three member Civil Aeronautics Board. The CAA was responsible for air traffic control, safety programs, and airway development. The CAB was entrusted with safety rulemaking, accident investigation, and economic regulation of the airlines." (Wikipedia HERE).