And what better supersleuth could be called on to deal with vanishing rocks than Sherlock Holmes? In 1893, Holmes ingeniously handled a case involving crown jewels (HERE); in
1939 he had his hands full foiling an attempt at purloining the British Crown Jewels (HERE and HERE); and in 1987 Holmes was doing pretty much the same thing on home computer screens (HERE). 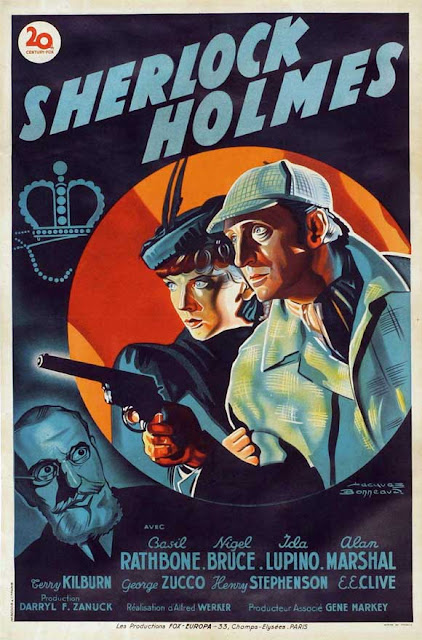 Our two stories today share the common theme of crown jewels snatching, one of them being set in the past and the other in what could be our future . . . 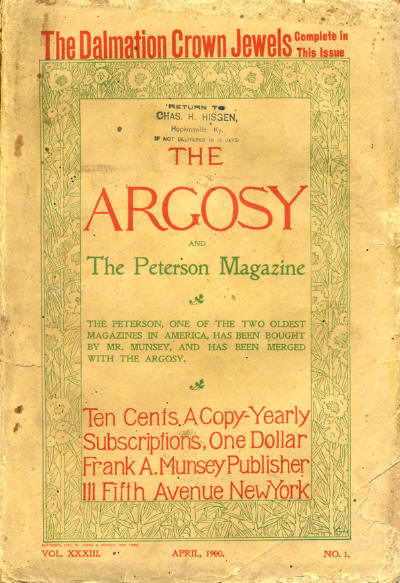 "A story of certain extraordinary circumstances that caused an honest and respectable young man to flee from pursuit as if he had transgressed the law, and brought him into close association with one who habitually defied it."

Chapter I: "On the other hand, failure means probable death, or life imprisonment, which is worse. Don't forget that."
Chapter II: "The Story of the Jewels":
"Nothing that I can tell you will come amiss, for the brightest intellects in the world are on the track of this thing, and will stop at nothing to get it."
Chapter III: "The Robbery of the Bank":
"The door stood open, and I could see plainly into every pigeonhole; and the upper right hand compartment was empty!"
Chapter IV: "Flight":
"So quickly and simply had the thing turned out that I had no idea at the time how narrowly I had escaped capture."
Chapter V: "Complications":
"The cries had anything but an amicable sound, to say nothing of clenched fists that I could see shaken in my direction. My thoughts came back to earth with a thump that sent a jar down my spinal column."
Chapter VI: "The Other Burglar":
"A suspected bank robber, liable to arrest at any moment, had no right to speak of love to such as she. And not arrest only; I could not disguise from myself the chain that circum-stances had wound around me."
Chapter VII: "How the Other Burglar Succeeded":
"From the parlors, close by, came the strains of dance music. Only a thin curtain separated Madeleine and her fellow merrymakers from this cool bank robber . . ."
Chapter VIII: "Under Arrest":
"The veranda was dark, and I was human. Was I to be blamed if, even with the shadow of crime overhanging me, I took the hands—and more?"
Chapter IX: "What Became of the Jewels":
"By disappearing in the neat way you did, you confused the whole crowd, both criminals and detectives, and gave me a clear field and a fair start."

Down on his luck after his penurious father has died, young Bobby Lewis, our first person narrator, sets out hoping for gainful employment in New York City and, nearly at the end of his resources, finds it with Gaylord & Co., run by an old family friend. But more than just managing a Wall Street banking firm is on Elmer Gaylord's mind these days: In his care the government of Dalmatia has placed its priceless collection of crown jewels until such time
as the country's revolution blows over; Gaylord needs a courier to carry the precious gems
to Europe and seems satisfied he has found one in Bobby.

When Gaylord unveils his plan to sneak the jewels into Europe, a simple but dangerous scheme that could be fatal to the possessor of the treasure, like so many young men who imagine they're indestructible, Bobby is gung-ho all the way. So the stratagem is put into motion—and just like almost every best-laid plan mankind has ever devised, right away it begins not simply to unravel but to self-destruct, leaving Bobby, so to speak, holding the
bag and providing just what this scheme needs—a perfect fall guy . . .

Resources:
- This is the only periodical publication by Gilbert Ashton listed by FictionMags. 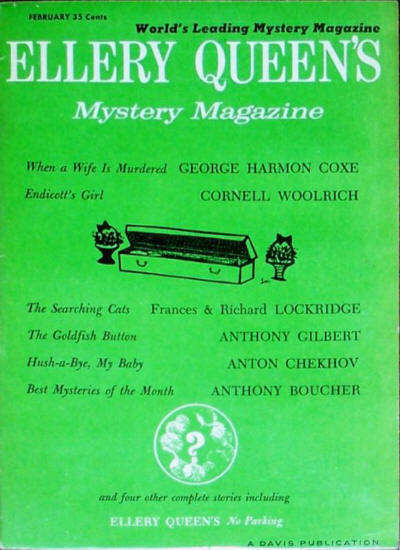 "Do you know, this is a fascinating variation of the old locked room problem. A robot ship in transit is a locked room in the most classic sense."

Inspector Gregg's reputation, not to mention his job, is on the line when an unmanned ship from Earth carrying the priceless Martian Crown Jewels, temporarily on loan to Terra, arrives at Phobos spaceport without a single precious stone in sight, an impossible situation given the circumstances; unless they're recovered, not just Gregg's job but also cordial interplane-tary relations will soon evaporate. 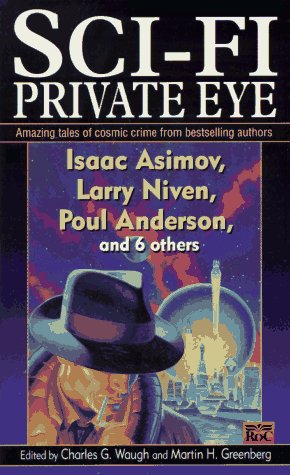 The Inspector's best hope lies in Syaloch, Mars's most famous investigator, a big-bowled pipe smoker known to torture a stringed instrument and a devotee of a certain English consulting detective, a brainy being who doesn't even breathe air. Gregg, admitting his fondness for this Martian Sherlock, describes his amazing (by Earth standards) friend:

"To compare the species of different planets is merely to betray the limitations of language. Syaloch was a seven-foot biped of vaguely storklike appearance. But the lean, crested, red-beaked head at the end of the sinuous neck was too large, the yellow eyes too deep; the white feathers were more like a penguin's than a flying bird's, save at the blue-plumed tail; instead of wings there were skinny red arms ending in four-fingered hands. And the overall posture was too erect for a bird." 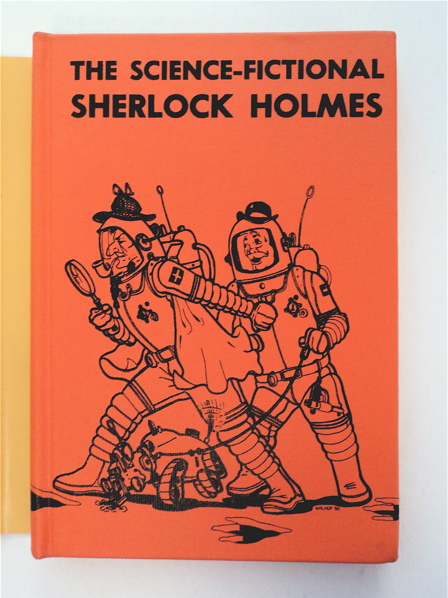 Regardless, being off-planet is no problem for this sleuth, and the gravity of the situation hasn't escaped him either:

"A Martian in an Earthlike atmosphere is not much hampered, needing only an hour in a compression chamber and a filter on his beak to eliminate excess oxygen and moisture. Syaloch walked freely about the port clad in filter, pipe, and tirstokr cap, grumbling to him-self at the heat and humidity. He noticed that all the humans but Gregg were reserved, almost fearful, as they watched him—they were sitting on a secret which could unleash red murder." 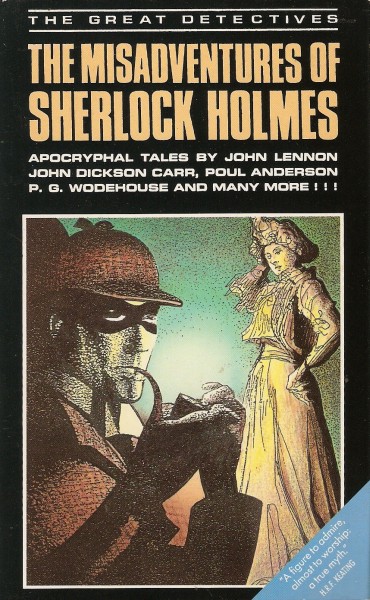 Syaloch's solution to the problem of the missing jewels will come to rest upon the answers to a few simple questions:
~ "If you please, my good man, what is your hobby?"
~ "Ah, tell me, is this equipment standard for all stations? May I inspect it more closely?"
~ "Why must spaceships be painted?"
. . . and . . .
~ "What is the half-life?"

Comment: Anderson's clear descriptive prose enables the reader to visualize how this complex crime was carried out. 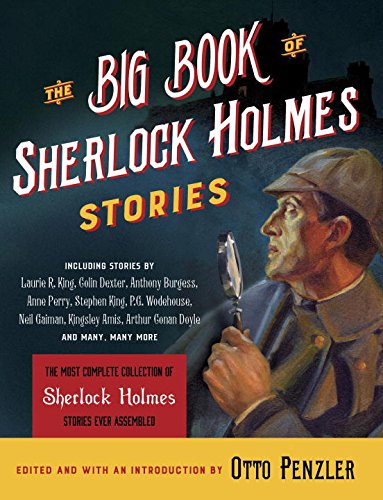 Resources:
- As usual, useful data about Poul Anderson can be found in Wikipedia (HERE), the SFE (HERE), and the ISFDb (HERE). 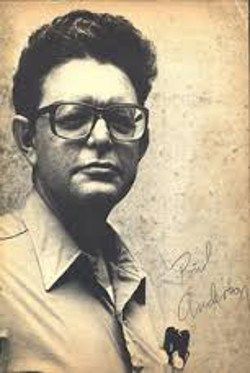 - The Martian moon Phobos and especially its physical characteristics are important factors in Syaloch's solution to the mystery; see the Wikipedia articles about Phobos in fact (HERE) and in fiction (HERE), as well as the Atomic Rockets page (HERE). 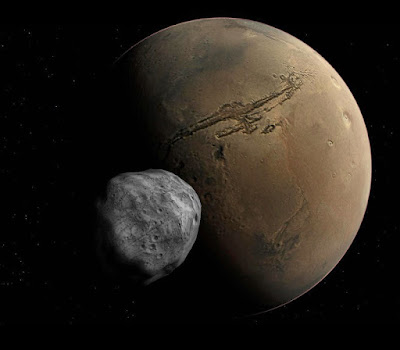 - Our latest visit to Mars was last September (HERE). 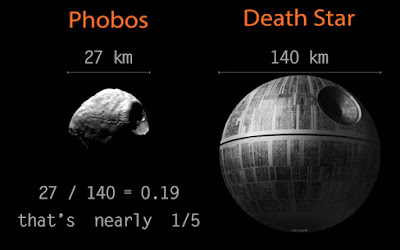