"They Have More on Their Minds Than Mere Looting"

THE MIXING AND MATCHING of science fictional tropes with hardboiled detective motifs has a long history and is still going on even today; a mid-20th century example of what we mean would be . . .
"S.O.S. Aphrodite!"
By Stanley Mullen (1911-74). 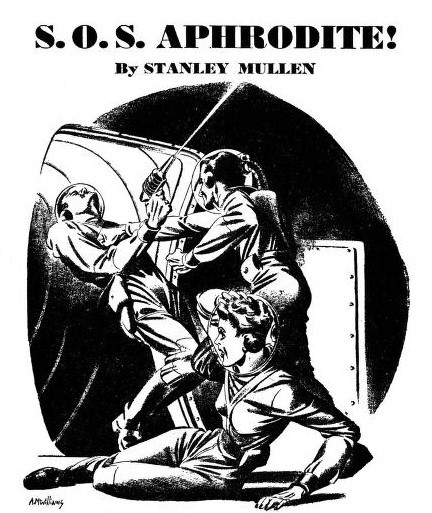 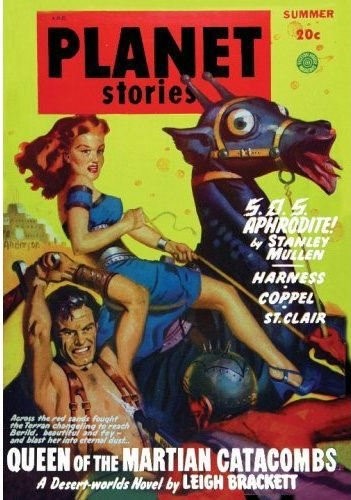 Short story (15 pages).
Online at SFFAudio (HERE).
"This is a well-organized group of saboteurs, pirates and assassins backed by a ring of powerful and unscrupulous men, some of them in high places."
. . . so warns an unsympathetic ISP official. Most of us would think twice (and maybe more than twice) at the mere idea of opposing such people, especially when, as he says, "we can no longer give you official backing"—meaning that, as Lieutenant Steve Coran knows too well, if anything goes wrong he's on his own—and it doesn't help that he already has two black marks on his service record . . . .
Main characters:
~ Steve Coran:
"I can't stand the smell of perfume around here. And the jobs don't come too tough. Relax, big shot. I'll run your stinking little errand for you. But it's the last one."
~ Gerda Mors:
"Marry you!"
~ Shalm:
"The upper part of his head had been blown away by a blaster gun, evidently fired at close quarters."
~ Hamlin:
"In the frame of the opened doorway stood the purser, mouth open, pointing at the dead man with a trembling finger."
~ Harriman:
"Where's the gun?"
~ Nalson:
"Better send for Jomian."
~ Jomian:
"After twelve years in the Space Patrol, I'm used to handling bad boys."
Typo: "we musn't".
Resources:
- In our story the colonization of Venus is well underway, but that's the Venus of 1949; what about the actual prospects of establishing Venus colonies? See the Wikipedia article (HERE) that briefly discusses some very ambitious proposals:
"At least as early as 1971 Soviet scientists have suggested that rather than attempting to colonize Venus' hostile surface, humans might attempt to colonize the Venerian atmosphere. Geoffrey A. Landis of NASA's Glenn Research Center has summarized the perceived difficulties in colonizing Venus as being merely from the assumption that a colony would need to be based on the surface of a planet: 'However, viewed in a different way, the problem with Venus is merely that the ground level is too far below the one atmosphere level. At cloud-top level, Venus is the paradise planet.' . . . . As an alternative to floating cities, it has been proposed that a large artificial mountain, dubbed the 'Venusian Tower of Babel', could be built on the surface of Venus. It would reach up to 50 kilometres (31 mi) into the atmosphere where the temperature and pressure conditions are similar to Earth's. Such a structure could be built using autonomous robotic bulldozers and excavators that have been hardened against the extreme temperature and pressure of the Venus atmosphere." Also consult the Atomic Rockets website (HERE) for more details.
- "It's 146 days to Venus": From the same Wikipedia article:
"Venus's relative proximity makes transportation and communications easier than for most other locations in the Solar System. With current propulsion systems, launch windows to Venus occur every 584 days, compared to the 780 days for Mars. Flight time is also somewhat shorter; the Venus Express probe that arrived at Venus in April 2006 spent slightly over five months en route, compared to nearly six months for Mars Express. This is because at closest approach, Venus is 40 million km (25 million mi) from Earth (approximated by perihelion of Earth minus aphelion of Venus) compared to 55 million km (34 million mi) for Mars (approximated by perihelion of Mars minus aphelion of Earth) making Venus the closest planet to Earth."
- "Space Pirates," writes Winchell Chung, "is a science fiction trope that just won't go away. The image of pirate freebooters on the high seas is just too romantic for words, science fiction writers can't resist. Alas, in a scientifically accurate world, they are more or less impossible, much like space fighters and for similar reasons. There ain't no stealth in space, so it is practically impossible for a fat space galleon to be surprised in mid trip by a sinister space corsair flying the Jolly Roger. Or a rude surprise for a space merchant ship whose trajectory passes too near the Somali Asteroids for that matter. It would be several orders of magnitude easier for the 'piracy' to take the form of grand theft from the merchant's warehouses on the ground." See Atomic Rockets (HERE). 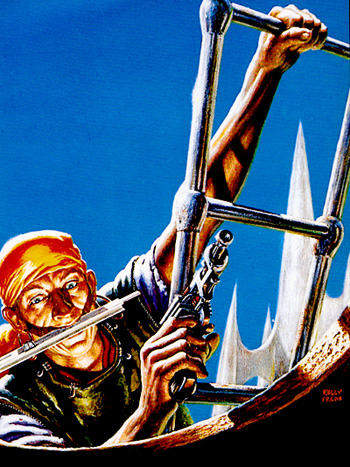