"A Mummy Can Very Well Be Priceless"

EDGAR ALLAN POE essentially invented the detective fiction motif of the "Watson," the clueless narrator being constantly dazzled by the brilliance of the sleuth; with slight variations Conan Doyle, Agatha Christie, and a host of other writers heartily embraced it. Today's author does the same when he has his protagonist investigating the skullduggery going on in the . . .
"Museum of the Dead."
By Curtiss T. Gardner (1898-?). 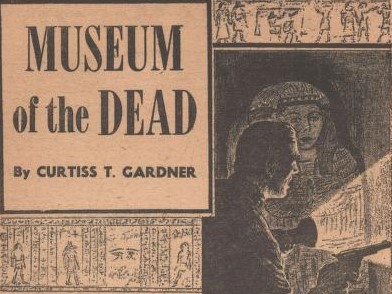 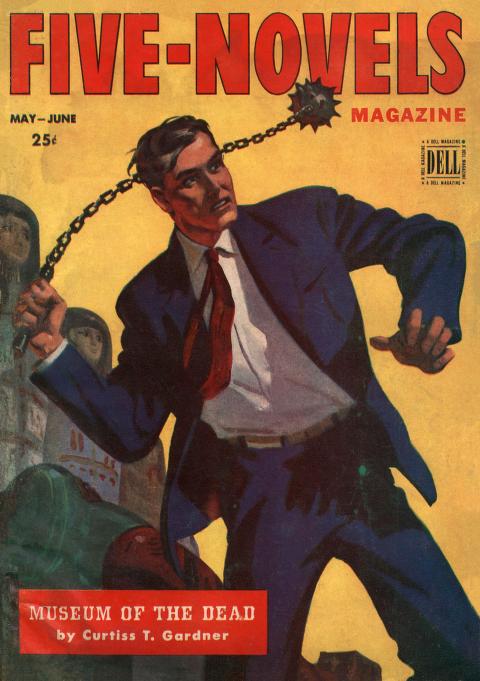 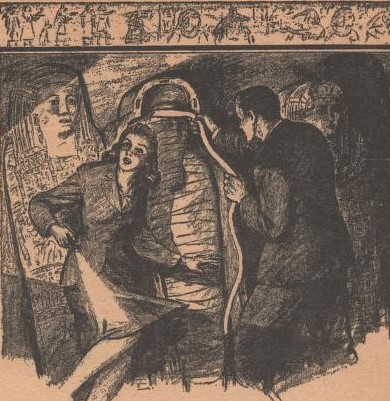 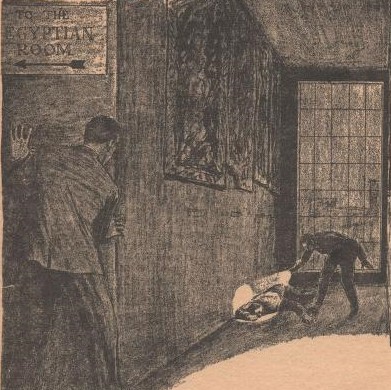 "If you don't keep the Company from suffering a heavy loss on this claim, you may find yourself back on the street taking orders from some more resourceful Claims Manager."
When a mummy goes missing from a museum display and a recently murdered man is found in its place, after which more murders start turning up, a sharp insurance investigator, with his fire-breathing boss pushing him hard for results, realizes that he might be in over his head and wisely seeks specialized help: "A mummy? Simply a name for a pickled corpse" . . . 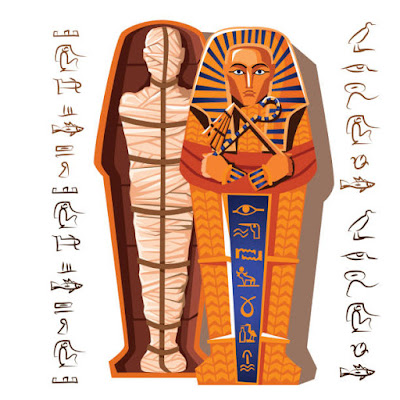 Principal characters:
~ Webb:
"Collecting ancient curiosities is my hobby."
~ Keefe Scanlan:
"Are you referring, Webb, to that thing in your hand or the company's time you are wasting?"
~ Clifford Ainsworth:
"Bleed me . . . Vandals . . . the rug."
~ Dr. Franklin O'Connor:
"I can't sign away the Museum's claim. That would be acceptance of a bribe, betrayal of my trust."
~ Paul Bancroft:
"I don't follow you."
~ Bruno Steele:
"I'm just an ordinary guy in the insurance game. But Bruno Steele is a Master Mind."
~ Sara Murcheson:
"My horoscope says that sudden death for someone close means independence for me."
~ Lt. Lacey:
"She's been stabbed. And whoever killed her was taking no chances on possible identification."
~ Prince Ronnoco:
"In fact, at this very moment, you are in trouble through his activities."
References and resources:
- "a genuine fifteenth century chiseled Italian dag": In times past, as much, if not more, effort was put into making a weapon a work of art than engineering; see the related Wikipedia article (HERE). 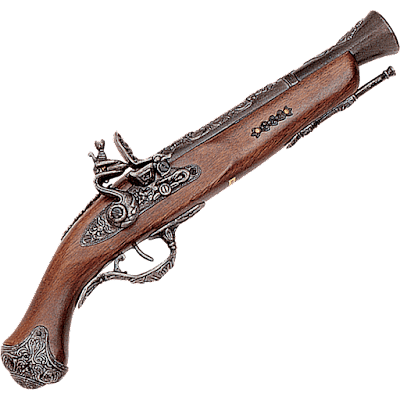 - "I reached for my panama": It has never gone out of style:
"Despite their name, Panama hats have never been made in Panama. They originated in Ecuador where they are made to this day. Their designation as Panama hats originated in the 1850s, when Ecuadorian hat makers emigrated to Panama, where they were able to achieve much greater trade volumes" (Wikipedia HERE). 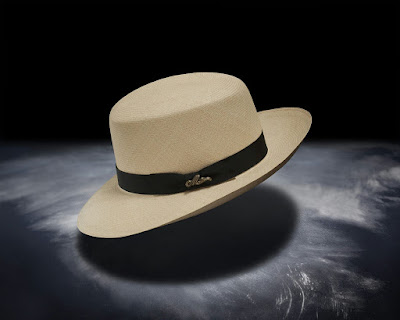 - "Amenhotep IV, the heretic king who changed his name to Aknaton": A reformer whose memory was almost completely erased:
"As a pharaoh, Akhenaten is noted for abandoning Egypt's traditional polytheism and introducing Atenism, or worship centered around Aten" (Wikipedia HERE).
"King Amenhotep IV suffered from an illness called Marfan’s Syndrome, which now affects about one in 5,000 people. This illness is a genetic disorder that involves the body’s connective tissue. The depictions of Akhenaten and his family show that they suffered from Marfan’s Syndrome. Some of these symptoms are an elongated head, neck, arms, hands, and feet. They also had a potbelly and heavy thighs, poor muscle tone, and a short torso. This illness makes people taller than they have to be and they even may die in early ages. Surprisingly, Akhenaten insisted that all of his depictions must be real instead of the muscular-looking depictions of pharaohs in the past as he wanted to look as he really was in his depictions" (Trips in Egypt HERE). 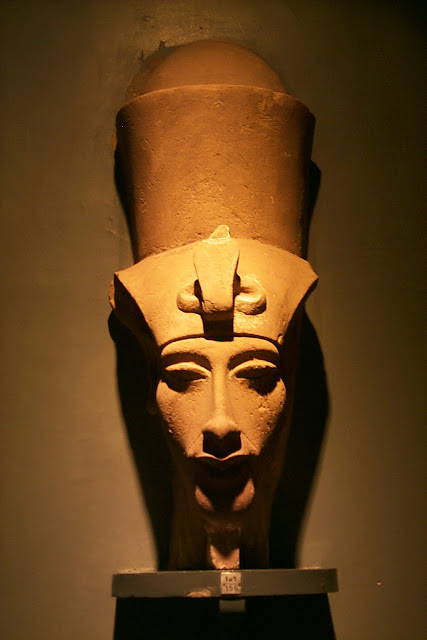 Akhenaten's "son-in-law and successor" was Smenkhkare:
"Smenkhkare (alternatively romanized Smenkhare, Smenkare, or Smenkhkara; meaning 'Vigorous is the Soul of Re') was an Egyptian pharaoh of unknown background who lived and ruled during the Amarna Period of the 18th Dynasty. Smenkhkare was husband to Meritaten, the daughter of his likely co-regent, Akhenaten. Very little is known of Smenkhkare for certain because later kings sought to erase the Amarna Period from history. Because of this, perhaps no one from the Amarna Interlude has been the subject of so much speculation as Smenkhkare" (Wikipedia HERE).
- "to its peak during the XXIst dynasty and its decline and abandonment after the Ptolemaic period": We wouldn't know much about Egypt's history if people hadn't left things lying around:
"The history of Egypt has been long and wealthy, due to the flow of the Nile River with its fertile banks and delta, as well as the accomplishments of Egypt's native inhabitants and outside influence. Much of Egypt's ancient history was a mystery until Egyptian hieroglyphs were deciphered with the discovery and help of the Rosetta Stone. Among the Seven Wonders of the Ancient World is the Great Pyramid of Giza" (Wikipedia HERE). 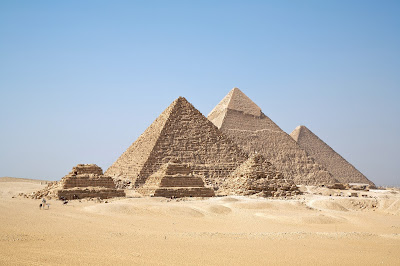 - "still crusted with the resinous paste used by the embalmers": They were meticulous because they believed there was a lot at stake:
"The ancient Egyptians had an elaborate set of funerary practices that they believed were necessary to ensure their immortality after death. These rituals included mummifying the body, casting magic spells, and burials with specific grave goods thought to be needed in the afterlife" (Wikipedia HERE).
- "a sculptured figure of the Assyrian King, Tiglath-Pileser III": He was an important figure in ancient Middle Eastern history:
". . . a prominent king of Assyria in the eighth century BCE (ruled 745–727 BCE) who introduced advanced civil, military, and political systems into the Neo-Assyrian Empire. He made sweeping changes to the Assyrian government, considerably improving its efficiency and security. He created Assyria's first professional standing army" (Wikipedia HERE).
- "zdravtze" [sic]: Misspelled in the text:
". . . Zdravetz, also known as Bulgarian Geranium, is steam distilled from Geranium macrorrhizum, a perennial flowering plant with aromatic leaves. The oil possesses a beautifully complex green, woody, herbaceous and slightly floral aroma" (From Nature with Love HERE).
- "hyssop": A very useful plant:
"Hyssopus officinalis or hyssop is a shrub in the Lamiaceae or mint family native to Southern Europe, the Middle East, and the region surrounding the Caspian Sea. Due to its purported properties as an antiseptic, cough reliever, and expectorant, it has been used in traditional herbal medicine" (Wikipedia HERE).
- "stratigraphy": A heavy subject of study—or the study of a heavy subject:
"Stratigraphy is a branch of geology concerned with the study of rock layers (strata) and layering (stratification). It is primarily used in the study of sedimentary and layered volcanic rocks" (Wikipedia HERE).
- "Hissarlik [sic] . . . ancient Troy": It's traditional to assume Homer wrote about it:
"After many decades of scientific and literary study by specialists, the site is generally accepted by most as the location of ancient Troy, the city mentioned in ancient documents of many countries in several ancient languages, especially ancient Greek, where it appears as Ilion in the earliest literary work of Europe, the Iliad" (Wikipedia HERE).
- "Kreisler, Heifetz and Menuhin": Three well-known violinists in their day:
"Fritz Kreisler (1875–1962) was an Austrian-born American violinist and composer. One of the most noted violin masters of his day, and regarded as one of the greatest violinists of all time, he was known for his sweet tone and expressive phrasing" (Wikipedia HERE).
"Jascha Heifetz (1901–87) was a Russian-American violinist. Born in Vilna (Vilnius), he moved as a teenager to the United States, where his Carnegie Hall debut was rapturously received. He was a virtuoso since childhood . . ." (Wikipedia HERE).
"Yehudi Menuhin, Baron Menuhin, OM KBE (1916–99) was an American-born violinist and conductor who spent most of his performing career in Britain. He is widely considered one of the great violinists of the 20th century" (Wikipedia HERE).
- "the Egyptian god, Horus": Being a god of the sky, he was often associated with the falcon:
"Horus or Her, Heru, Hor, Har in Ancient Egyptian, is one of the most significant ancient Egyptian deities who served many functions, most notably god of kingship and the sky. He was worshipped from at least the late prehistoric Egypt until the Ptolemaic Kingdom and Roman Egypt" (Wikipedia HERE). 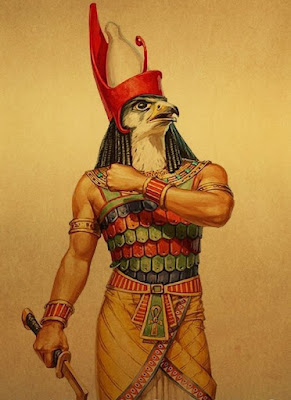 - "a carboy of embalming fluids": That could be anything up to 16 gallons:
"The word carboy is from the Persian qarābah (قرابه), from Middle Persian Karāvah. Arabic also borrowed it as qarrāba, meaning 'big jug'" (Wikipedia HERE).
- "a devil's tattoo": "A drumming with the fingers or feet" (Wiktionary HERE).
- "Stalin's real handle of Djugashvili": At the time of our story he had seven years left to live, and nobody missed him when he was gone:
"Joseph Vissarionovich Stalin (born Ioseb Besarionis dzе Jughashvili, 1878–1953) was a Georgian revolutionary and political leader who ruled the Soviet Union from 1927 until his death in 1953" (Wikipedia HERE). 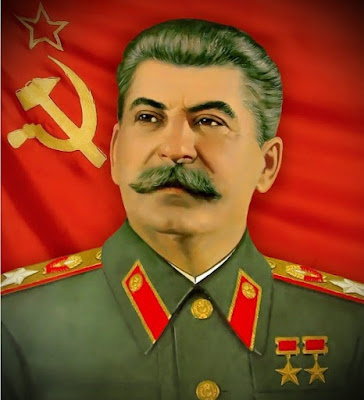 - "a child of the intense fiery sign of Scorpio": Don't confuse it with the astronomical constellation of Scorpius:
". . . the Sun transits this sign on average from October 23 to November 22" (Wikipedia HERE).
- "the flail": A nasty thing that can be as dangerous to its user as it is to its target:
"A flail is a weapon consisting of a striking head attached to a handle by a flexible rope, strap, or chain. The chief tactical virtue of the flail was its capacity to strike around a defender's shield or parry. Its chief liability was a lack of precision and the difficulty of using it in close combat, or closely ranked formations" (Wikipedia HERE). 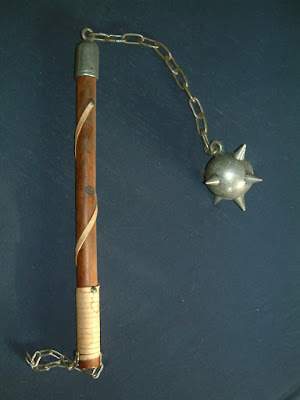 - "a Pearl Harbor attack": Of all of the air raids in history this one seems to be most remembered:
"The attack on Pearl Harbor was a surprise military strike by the Imperial Japanese Navy Air Service upon the United States (a neutral country at the time) against the naval base at Pearl Harbor in Honolulu, Territory of Hawaii, just before 08:00, on Sunday morning, December 7, 1941. The attack led to the United States' formal entry into World War II the next day" (Wikipedia HERE).
- "read Gray's Elegy": You've never heard of it?
"It embodies a meditation on death, and remembrance after death. Claimed as 'probably still today the best-known and best-loved poem in English,' the Elegy quickly became popular. It was printed many times and in a variety of formats, translated into many languages, and praised by critics even after Gray's other poetry had fallen out of favour" (Wikipedia HERE).
- Curtis Tarring Gardner's FictionMags thumbnail: "Born in Maryland; graduate of MIT; lived in Tice, Florida."
- Our author evolved a series character which the editors of G-Men Detective seem to have been fond of: Bill “Munchausen” Tolliver, steadily appearing in 15 stories from 1943 to 1948. Gardner's other series characters: Charles Mallory (2 stories, 1944 and 1946) and Val Vickers (3 stories, 1943-44). (FictionMags data.) The rest of his short tales, like today's narrative, seem to have been one-offs.
- Another story about an insurance investigator that you might enjoy is Ronald Knox's novel The Three Taps (1927), which we highlighted (HERE).
- With her enthusiasm for archaeology, it's not surprising that Agatha Christie would center one of her Hercule Poirot adventures on a mummy, "The Adventure of the Egyptian Tomb" (1923), which is online at Wikisource (HERE). 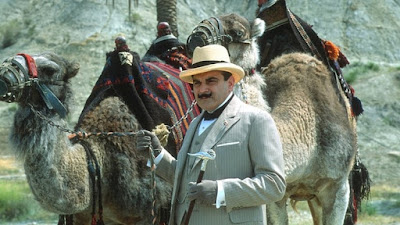 - The producers of the Ellery Queen TV series (1975-76), with Jim Hutton as EQ, couldn't resist working a plot around an Egyptian mummy; see "The Adventure of the Pharaoh's Curse" in the Wikipedia article (WARNING! SPOILERS! HERE) and the IMDb (HERE; WARNING! SPOILERS! in comments). 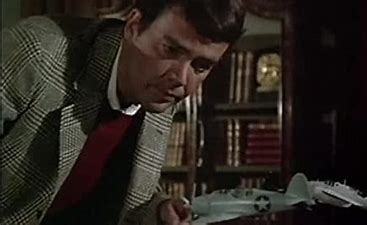 - Philip Wylie also dealt with foul murder in a museum in his story, "Ten Thousand Blunt Instruments" (1944), part of a collection that we highlighted (HERE); to read it, though, you'll have to buy the Crippen & Landru book (HERE).
- We have featured visually impaired detectives in the past: Thomas McMorrow's John Dyce (HERE) and Max Carrados in Ernest Bramah's "The Knight's Cross Signal Problem" (HERE).