"We Both Went Down Onto the Bare Boards of the Stage and Didi Cheri, Still Yelling, Jumped on Top of Both of Us" 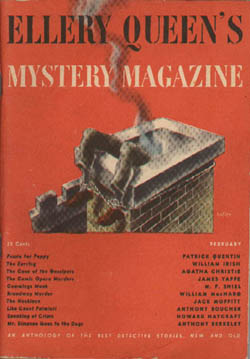 "In spite of our former prejudices, Poppy disarmed us immediately. She was just a big, bouncing, natural girl unspoiled by wealth."

What do Peter and Iris Duluth, a last will bequest, a nervous guardian, and a pregnant St. Bernard have in common? It will take a realization on Iris's part (one very reminiscent of a well-known G. K. Chesterton story) and a lucky shot by a precocious little girl with a charm-ing lisp to expose (and we do mean "expose") a carefully-planned murder plot against an unusual intended victim. 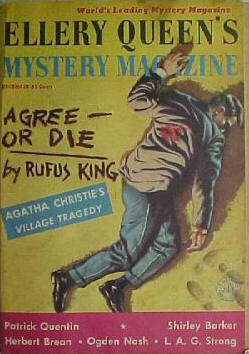 "There's a dead man lying in my apartment. If you don't do something, I'll be arrested."

For Peter Duluth (here flying solo without Iris), being a Broadway producer is hard enough, but when the leading lady for what he confidently believes will be a sure-fire hit becomes unavailable and her brilliant replacement gets herself neatly framed for murder, he could be forgiven for feeling that it's just not his day; in order to extricate his rising star, get his play before the public, and avoid the breadline, Peter will have to set a trap for the real killer, without the slightest inkling of who it might be.
Resources:
- Both Wikipedia (HERE) and the GAD Wiki (HERE) have plenty of information about Patrick Quentin; Curt Evans has his own short review of our book (HERE).
- Our previous encounters with Quentin's extremely rare short fiction featuring Peter and Iris are (HERE) and (HERE).

The bottom line: "Outside of a dog, a book is man's best friend. Inside of a dog it's too dark to read."
— Julius Henry Marx
Posted by Mike Gray at 12:33 PM