THE WILD ADVENTURES of Dr. Indiana Jones pretty much exploded the myth of the dull and prosaic life of the small university archaeology professor, and the same can be said of today's main character, a small university mathematician, as he's pushed to . . . 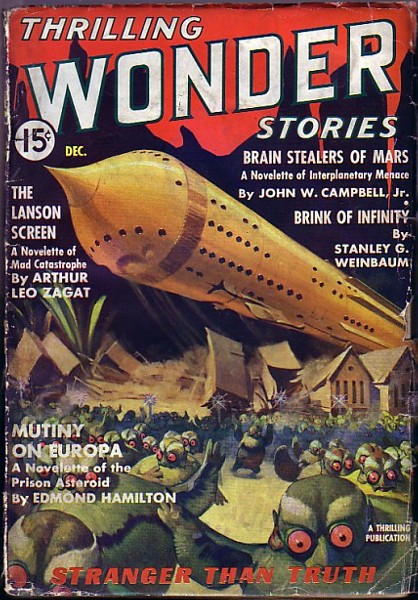 Reprinted in Startling Stories, March 1948 and Fantastic Story Magazine, Summer 1954, and collected and anthologized many times since (reprints page HERE). 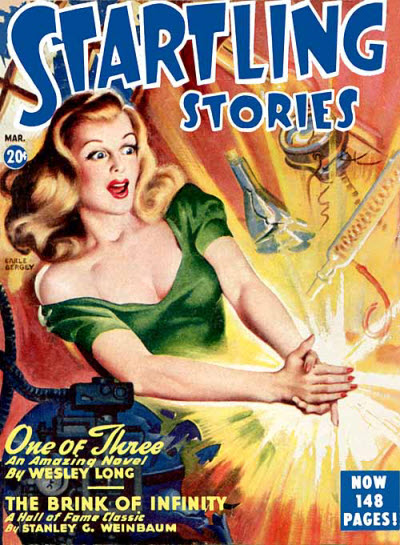 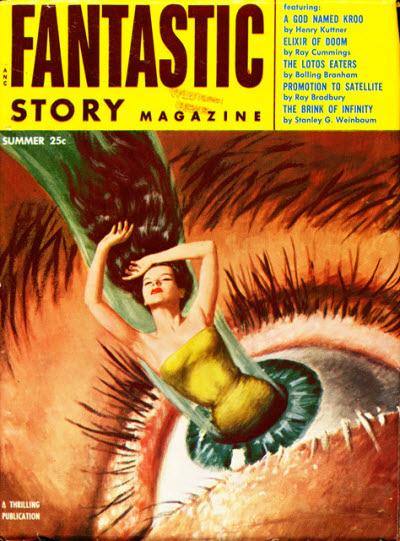 Online at Fadedpage (HERE).
(Note: As the transcriber informs us, there's a misprint: The square root of minus 1 is "i", not "e.")

"You're a mathematician, aren't you? Well, that makes you fair game for
me. A mathematician, my good friend, is no more to me than something to
be hunted down. And I'm doing it!"

Main characters:
~ Dr. Abner Aarons, Statistician and Consulting Mathematician:
"And what is the proposition, Mr. Strawn?"
~ Court Strawn, experimental chemist:
"As a matter of fact, Dr. Aarons, the experiment isn't completed yet. Indeed, to tell the truth, it is just beginning."

Typo: "And student of numbers" [should be Any].

Resources and references:
- "The mathematician's symbol for infinity is a tipsy eight—so: ∞.": The concept of infinity (Wikipedia HERE and HERE) has spawned interesting, if highly unlikely, conjectures such as "the infinite monkey theorem" (Wikipedia HERE) and other paradoxical notions (Wikipedia HERE), most of them primarily of interest to mathematicians.
- "Clerk-Maxwell, Lobachewski": Our author namedrops mathematicians largely unknown to the general public, James Clerk Maxwell (1831-79; Wikipedia HERE) and Nikolai Ivanovich Lobachevsky (1792-1856; Wikipedia HERE).
- "the great Albert Einstein himself": Time was (but such may have passed now that Western culture is being dismantled) that when the public bothered to think of brainy scientists, they would almost certainly envision Einstein (14 March 1879 – 18 April 1955), "a German-born theoretical physicist who developed the theory of relativity, one of the two pillars of modern physics (alongside quantum mechanics). His work is also known for its influence on the philosophy of science. He is best known to the general public for his mass–energy equivalence formula E = mc2, which has been dubbed 'the world's most famous equation'." (Wikipedia HERE).
- We can only speculate, but it could be that our author was under the influence of what has been called "the most popular short story ever written in English" (1924; PDF text HERE) or the 1932 film adaptation of it; see Wikipedia (WARNING! SPOILERS! HERE). Of course, in today's story the pursuit is mental ("checking my scraps of information, thinking, trying to remember fragments") and not, as in the movie, purely physical. 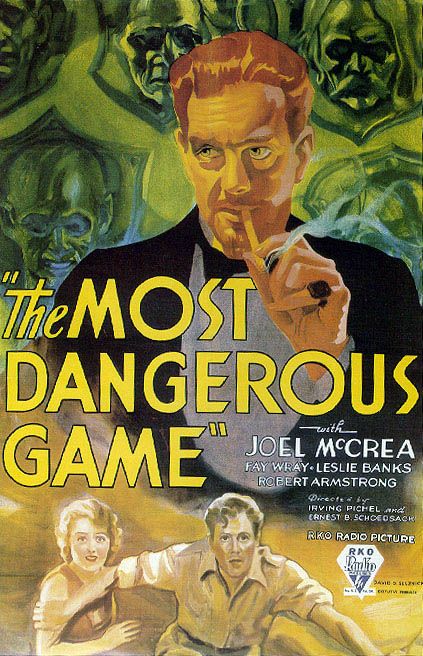 - This was Stanley Grauman Weinbaum's final published story because he died of lung cancer at the early age of 33, his publishing career only lasting less than a year and a
half; see Wikipedia (HERE), the SFE (HERE), the IMDb (HERE), and the ISFDb (HERE).