"The Usual Procedures of Investigation Were Worthless Here"

YOU DON'T ORDINARILY find a story with a Western setting that also happens to be a detective tale. You might recall the definition of Westerns (source unknown) as "crime dramas with big hats," with little or no sleuthing being done to bring the malefactors to justice, happenstance, coincidence, wild guesses, and obvious clues being the normal approach. Before you read today's story you might ask yourself just how much our author depended on the normal approach when he perpetrated . . .
"The Red Brand of Murder."
By Oscar Schisgall (1901-84). 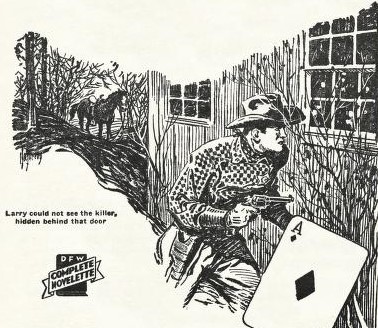 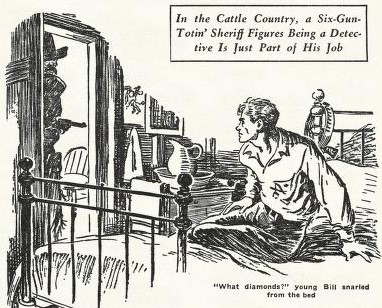 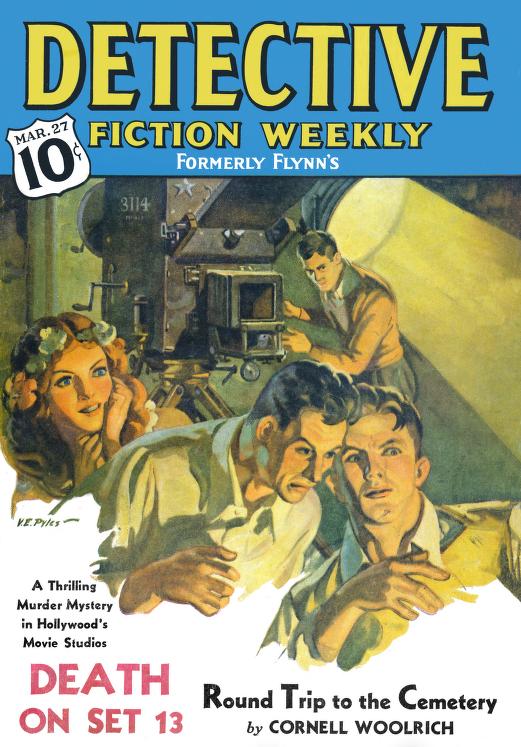 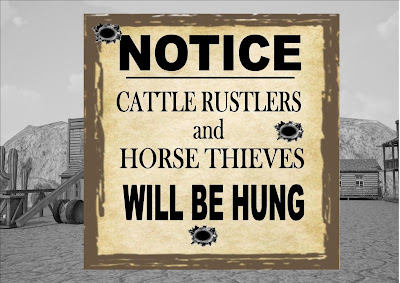 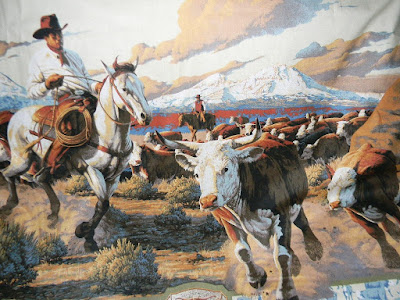 ". . . if this scheme works at all, it's goin' to work doggone fast."
For Sheriff Larry Devoe the Ace of Diamonds murders are nothing short of baffling:
"He thought again of the bodies which, during the last three months, had been found on the Bar H Bar range—cowpunchers for whose deaths nobody had yet offered a satisfactory explanation. He thought, too, of the strange symbol which had invariably been found on those corpses. It had been painted in blood on their shirts, over the heart—the crude replica of a playing card. Always it was the same: the Ace of Diamonds."
It doesn't help that the local ranchers are losing faith in Larry's competence and, even more important to him personally, the prettiest miss hereabouts only evinces hostility every time they meet. If he hopes to solve these crimes and get the girl, Larry is going to have to get proactive, pronto . . . .

Segments:
- Chapter I: "I'd sure give a lot to know what she's thinking."
- Chapter II: "Whine of Bullets"
- Chapter III: "Another Death"
- Chapter IV: "Larry Has Ideas"
- Chapter V: "The Little Black Bag".
Principal characters:
~ Larry Devoe:
"It's a lonely job, bein' a sheriff."
~ Horny Bob Lassiter:
"You—you've caught the Ace of Diamonds killer for 'em!"
~ Ellen Traine:
". . . laughed in a manner that mingled disdain with nervousness."
~ Bill Traine:
". . . can handle a rifle as well as any man within a hundred miles."
~ Pete Harmon:
"I've seen enough blood spilled on my land!"
~ The Mexican:
"Without a word of warning, he drew his gun . . ."
~ Slim Evans:
"I heard four shots."
~ Lefty Anderson:
"Reckon we all heard the shots at about the same time."
~ The bartender:
"Reckon they were kinda expectin' fireworks."
Comment: The sleuth is supposed to know whodunnit before the perp is revealed to the rest of us, right?
Typo: "buchwhacking you".
References and resources:
- "rustlin' cattle across the Rio Grande": For all the nuances of cattle rustling see Criminal Law Notes (HERE); more about it is on Wikipedia (HERE). Our story takes place very close to the Rio Grande, facilitating plot developments; see Wikipedia (HERE). 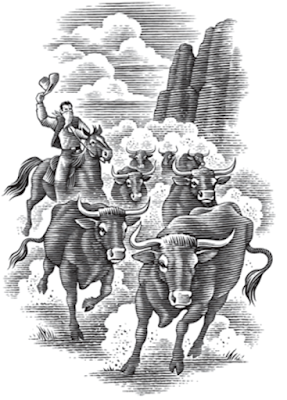 - "some Bar H Bar waddy": Used here as a faintly contemptuous synonym for "cowboy"; go to The Free Dictionary (HERE).
- "touched his Stetson": But not a ten-gallon one, surely: "Early on, Stetson hats became associated with legends of the West, including 'Buffalo Bill', Calamity Jane, Will Rogers, and Annie Oakley. It is said that George Custer rode into the Battle of Little Big Horn wearing a Stetson. Later on, Western movie cowboys were quick to adopt the Stetson; many were drawn to the largest, most flamboyant styles available"; see Wikipedia (HERE). Our author, however, uses the word "sombrero" to mean any hat.
- "several longhorns": Native to Texas but not originally Texas natives: "The Texas Longhorn is a breed of cattle known for its characteristic horns, which can extend to over 100 inches (2.54 m) tip to tip for cows and bulls. They are descendants of the first cattle introduced in the New World, brought by explorer Christopher Columbus and the Spanish colonists"; go to Wikipedia (HERE). 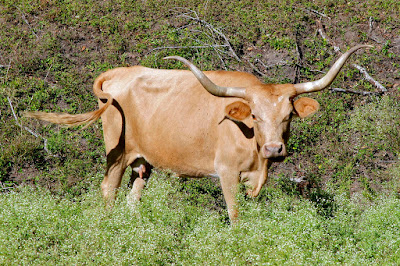 - "roweled his horse": Another term for "spurred"; see Wikipedia (HERE). 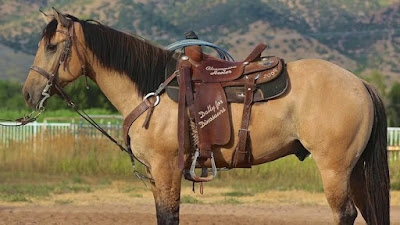 - "A buckboard": One of the first American SUVs: "The buckboard has no sideboards on the body, leaving the floor quite mobile. In rough terrain, the floor can flex and 'buck,' lending the vehicle its name"; see Wikipedia (HERE). 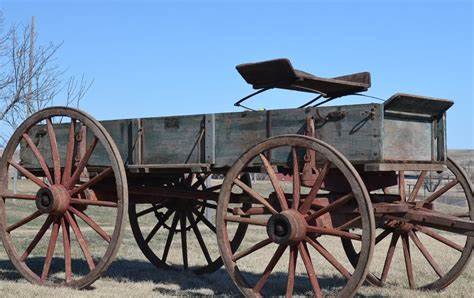 - "time to palaver": Funny how this European term came to be on the lips of so many Americans. Palaver means a long discussion or procedure, from the Portuguese word "palavra"; go to Wikipedia (HERE).
- "were dry-gulched": Usually written with the hyphen: "(U.S., slang) To murder; to attack, assault, especially in an ambush." As for where the term came from: "Because in the American West, outlaws often killed people as they passed through a dry gulch; or because cattle rustlers drove stolen animals off the edge of such a gulch. (ref. John Ayto 1998)"; see Wiktionary (HERE).
- "pulled iron in self-defense": Slang term for a firearm, not used as often these days; go to Wikipedia (HERE). 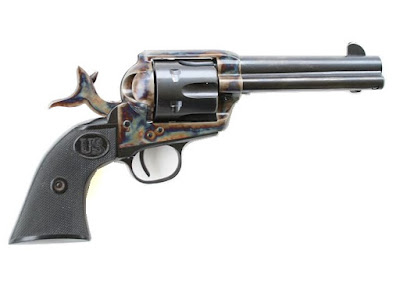 - "moseyed up to 'em": Nobody seems to know where the term originated; may we suggest that what the Old Testament patriarch did with his people wandering 40 years in the desert might have something to do with it? See Wikipedia (HERE).
- "the black gelding": A horse that's been unwillingly forced to make a major sacrifice: "Castration, as well as the elimination of hormonally driven behavior associated with a stallion, allows a male horse to be calmer and better-behaved, making the animal quieter, gentler and potentially more suitable as an everyday working animal"; go to Wikipedia (HERE).
- "no border hacienda": "Haciendas originated in the Spanish colonization of the Americas as conquests followed a similar pattern in many places. As the Spanish established cities in the middle of conquered territories smaller plots of land were distributed in nearby while far-away areas were granted as large landholdings to conquistadores becoming haciendas and estancias. Distribution of land happened in parallel to the distribution of indigenous people who entered servitude"; see Wikipedia (HERE).
- "pow-wow with Bill": "In popular culture, such as older Western movies, the term has also been used to describe any gathering of Native Americans, or to refer to any type of meeting, such as among military personnel"; go to Wikipedia (HERE) for the original pow-wow.
- "a low, flat mesa": "As noted by Bryan in 1922, mesas '...stand distinctly above the surrounding country, as a table stands above the floor upon which it rests.' It is from this appearance the term mesa was adopted from a Spanish word meaning table"; see Wikipedia (HERE). 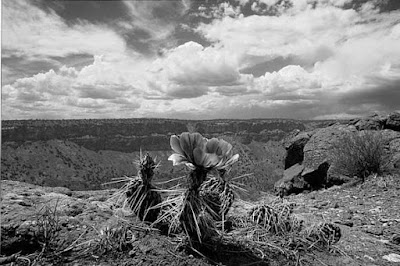 - "Yet it seemed a queer region for the smuggling of diamonds": The long border between Mexico and the United States (1954 miles) has always been porous, so that smuggling anything—diamonds, drugs, weapons, people—has historically been relatively easy: ". . . according to the 1848 Treaty of Guadalupe Hidalgo between the two nations, 'along the deepest channel' (also known as the thalweg)—a distance of 2,020 kilometers (1,255 mi) to its mouth at the Gulf of Mexico. The Rio Grande frequently meanders along the Texas–Mexico border. As a result, the United States and Mexico have a treaty by which the Rio Grande is maintained as the border, with new cut-offs and islands being transferred to the other nation as necessary"; go to Wikipedia (HERE).
- "to the Border Patrol": Although the USBP wasn't officially organized until 1924, other entities had been doing patrolling unofficially for some time: "Mounted watchmen of the United States Department of Commerce and Labor patrolled the border in an effort to prevent illegal crossings as early as 1904, but their efforts were irregular and undertaken only when resources permitted. The inspectors, usually called 'mounted guards', operated out of El Paso, Texas. Though they never totaled more than 75, they patrolled as far west as California trying to restrict the flow of illegal Chinese immigration. In March 1915, Congress authorized a separate group of mounted guards, often referred to as 'mounted inspectors'. Most rode on horseback, but a few operated automobiles, motorcycles and boats. Although these inspectors had broader arrest authority, they still largely pursued Chinese aliens trying to avoid the National Origins Act and Chinese Exclusion Act of 1882"; see Wikipedia (HERE).
- A few years ago we highlighted several other short stories by Oscar Schisgall that weren't Western-related (FictionMags HERE): "No Nerve," "Family Affair," and "Nine Roses for the Commissar" (HERE). 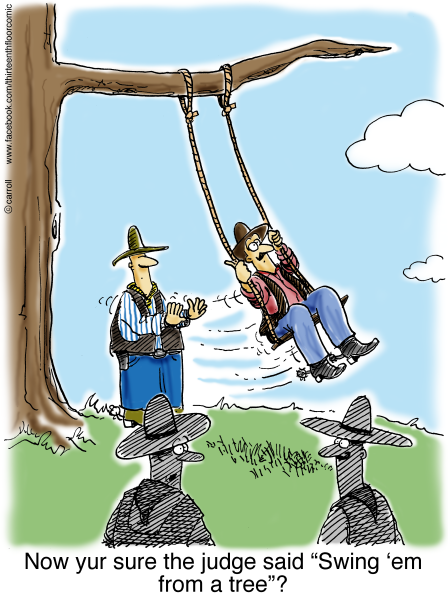