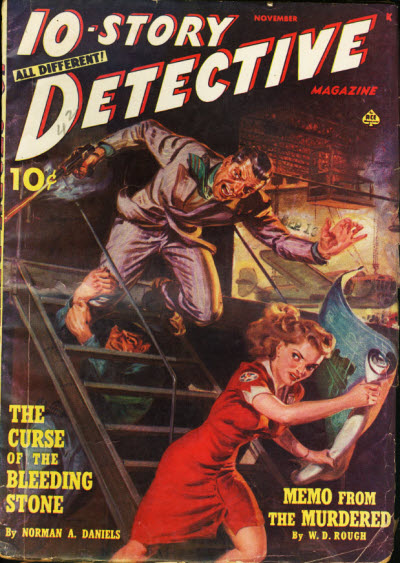 "It was curtains for Sam Conway, newshawk, if he didn’t turn in a red-hot story for his city editor. But when Conway’s nose for news made him the goat for a murder rap, his boss was all set to switch Conway’s by-line into an obit item."

Sam figures that one murdered Santa Claus is bad enough, but two does seem a bit excessive:

". . . why in hell did everyone dressed as Santa Claus get knocked off?
Was it all the work of some mad misanthrope who wanted to get rid of
all Santa Clauses? If so, Conway pitied all the department store Santas
who’d spring into existence about December first. No, he told himself,
there must be a more logical explanation."

. . . and there is—but every time a jolly old elf bites the bullet, somebody puts Sam squarely in the frame . . .
Dramatis personae:
~ Sam Conway:  "He felt so low he didn’t even notice the eye-satisfying blonde that strutted ahead of him. All he could think of was what old Monkey-Nose, his city ed, had told him that afternoon . . ."~ "Old Monkey-Nose":  "Sure it’s a good story, but don’t expect the paper to get you outa your jam. If you want to kill Santa Clauses for a story, that's great—but you have to take the rap."~ Dan Harris:  "His eyes stared glassily at the ceiling. A smear of crimson had crept through the red jacket and stained the lower portion of the white beard."~ "A blonde with beautiful brown eyes":  "You're in a spot, sister—a murdered man in your room and only dead a few minutes before you found him."~ "A wide-eyed little man with a suitcase in his hand":  "I didn’t exactly see her, but I live in the room next door, and I heard two men and a woman talking in here a while ago."~ The house dick:  "Hand over the gun, buddy. You’d better not give me any trouble, see?"~ "A big man with a scarred chin and a bald head":  "That's right, brother, but I don't think you'll live long enough to do much about it."
Noteworthy phraseology: "softened the aging doorman’s heart with a fiver"; "A crimson stream trickled from a pencil-hole in his forehead"; "at that particular moment he would have tried getting through the eye of a needle itself"; "jewels shone like tiny eyes in the night"; "the east where the prospective presence of the sun tinged the sky a pale pink."
Typos: "key in the Jock"; "picked pi up"; "I'm I not."
Resources:- FictionMags's chronological listing for our author (who, incidentally, is not to be confused with the motion picture writer and director) indicates that this was Edward Ludwig's first published story and that only three other tales were strictly crime fiction, most of his output being SFFnal; see the SFE (HERE) and the ISFDb (HERE).- Fred Smale's story ("Caught Out," HERE; note: story link dead) also features a newspaper-man trying to solve a crime, but he never gets himself into the desperate situations that Sam Conway does in today's story; reporter Edith Johnwell ("His Honor Is Missing," (HERE; note: removed from site), however, has a far different experience. Other newshawks that we've encountered include brainy Marshall T. Custer ("The Girl with the Burgundy Lips," HERE) and shrewd Jimmie Silverdale ("Silverdale of Brain Street," HERE).The bottom line:
"Ah, but you must have a Christmas uncomplicated by murder."
― Christie
~~~~~~~~~~~~~~~~~~~~~~~~~~~~~~~~~~~~~~~~~~~~~~~~~~~~~~~~~~~~~~~~~~~~~~~~~~~~
Posted by Mike Gray at 10:41 AM