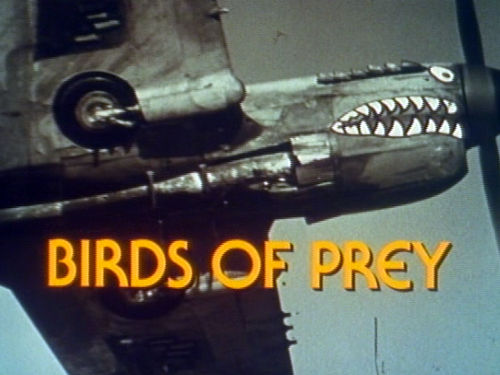 The first and only time I saw Birds of Prey forty-one years ago, it blew me away. As action films go, I still think it's superior to many; and the fact that it was made for television on a minimal budget makes it even more remarkable.

One day he happens to observe a bank robbery in progress, which he duly reports to his good pal from the war (Ralph Meeker), who is now a police captain with the Salt Lake City PD. But Meeker doesn't believe him at first, thinking it's another one of Janssen's middle-aged pranks.

That's all it takes: Janssen sees it as a challenge—and the chase is on. From this point forward, the film is indeed one giant chase sequence. The bad guys transfer themselves, their loot, and a hostage to a helicopter only to be relentlessly harried by Janssen every step of the way. The pacing is terrific.

In addition to two good performances from Janssen (settling into his world-weary Harry O character) and Meeker, the helicopters also star here. This was long before CGI (computer-generated visual effects); when the choppers swoop under freeway overpasses with a foot or less separating the rotor blades from the concrete abutments, it's the real thing. Another amazing sequence happens INSIDE an aircraft hanger, when Janssen corners the bad guys' copter; this needs to be seen to be believed. The margin for error, with both copters swaying uncertainly in a Mexican standoff, has to be two or three inches at most.

Kudos to the late James W. Gavin for these sequences. Whenever Hollywood needed a master pilot who could also deliver lines in an acceptable fashion, Gavin was their go-to guy. He did lots of screen work in films and TV series, such as Adam 12.

If you really get into the characters in this film—as I did—then the final line will be especially poignant: "Damn you, Walker! I didn't ask you to do that!"

Tech note: If I remember correctly, Janssen's chopper was a Hughes 500D while the criminals had an Aerospatiale Alouette.

Birds of Prey is available on video, but some customers complain that the Second World War-era Big Band music featured in the film's network broadcast—music that is integral and meaningful to the two lead characters—has been replaced with something different, so be aware that you're not getting the original film. 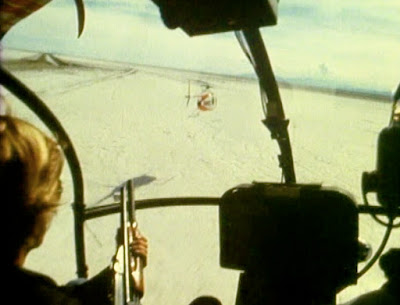 Category: Detective fiction
Posted by Mike Gray at 11:48 AM