JIMMIE SILVERDALE, a crime-solving Fleet Street newspaper reporter, was evidently intended to be a series character, but we've been able to unearth only two works with him, one a short story (below) and a novel (see "Resources"). We don't doubt that there were probably others, but for the nonce this will have to do. The FictionMags short note about George Dilnot, Silverdale's creator, gives us confidence that, as far as the journalism background is concerned, it should be true to life: "Born in Hayling Island, Hampshire, England; died in Esher, Surrey; journalist, author, and editor of the famous trials series published by Bles. Brother of Frank Dilnot." 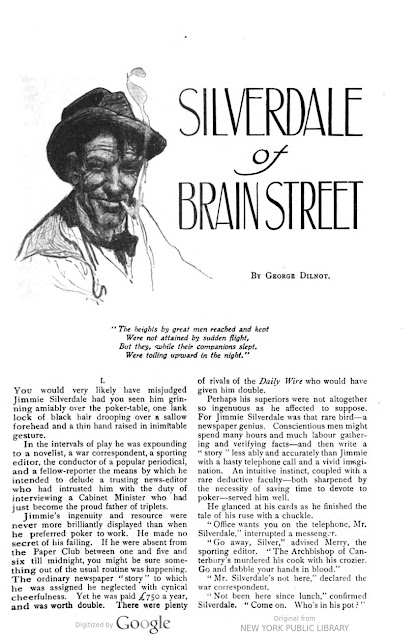 "In the unwritten table of values of Fleet Street, a mystery with a beautiful and rich woman as central figure is far beyond an exhaustive and possibly sordid explanation of crime."

Thanks to an anonymous tipster at Scotland Yard, ace crime reporter Jimmie Silverdale of the Daily Wire scoops the Fleet Street competition about a recent sensational murder:

Not only does Jimmie get the scoop, but after some major research he also finds, well in advance of the police, the seemingly inconsequential factoids which will, when correctly conjoined, lead straight to the murderer . . .

Major characters:
~ Greenford:
"Taxi-driver picked a lady up in Bond Street an hour ago. Instructed to drive to the Palatial Hotel. Commissionaire who opened the cab door there found a woman dead — shot."
~ The burly man:
"It's no suicide. I've been talking to Chinnery, who's handling the case. There's no pistol, for one thing. She'd only been shot a few minutes before she reached the Palatial—point twenty-two bullet. Taxi-driver hadn't stopped since he picked her up. It's a puzzle how it was done."
~ Mrs. Westmeon:
"I never killed her. I never! I never! I can prove I had nothing to do with it."
~ D. I. Chinnery:
"Chinnery looked at the calm young man who was taking it upon himself to issue orders to a divisional detective-inspector of the Criminal Investigation Department. Then he lifted his hat and scratched his head."
~ The Superintendent:
"What I want to know is how Chinnery let you get ahead of him." 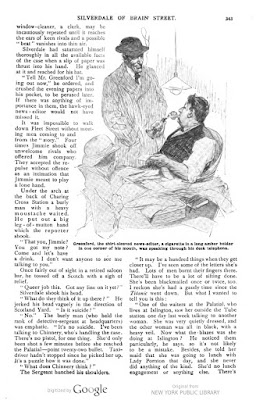 Resources:
- George Dilnot co-authored several books with ex-Scotland Yard man Frank Froest (1858-1930), some without Dilnot's byline, so there seems to be uncertainty as to who wrote exactly what. A note at Hathi Trust seeks to clear it up: "The Grell Mystery, 1914, and The Maelstrom, 1916, were published under the name of Frank Froest as author ... 'George Dilnot is really the co-author of The Grell Mystery and The Maelstrom.' — Letter of publisher, Aug. 19, 1920." In other words, Froest contributed the police background while Dilnot supplied the writer's skills.
- More information about Dilnot is available (HERE), and about Froest (HERE) and (HERE).
- If you're not familiar with a rook rifle, see Wikipedia (HERE) for enlightenment.
- Dilnot is credited with the following crime fiction novels, all of which are online for the moment (his articles and short stories—and he wrote dozens of them—don't seem to have been collected yet):
~ The Grell Mystery (1913) (HERE).
~ Scotland Yard: The Methods and Organisation of the Metropolitan Police (1916) (HERE).
~ The Maelstrom (1916) (HERE and HERE).
~ Suspected (1920) (HERE). Amazon's product description:

"Jimmie Silverdale, the top crime reporter on the Daily Wire, thought he was onto a real scoop with the murder of the industrialist Sir Harold Saxon. Until, that is, he discovered that the chief suspect is the woman that he has fallen in love with. Could it be possible that the woman who had nursed him back to health during the war was really a murderer? Silverdale finds that he must work hand in hand with one of Scotland Yard’s finest in order to prove the innocence of the woman he wants to marry." 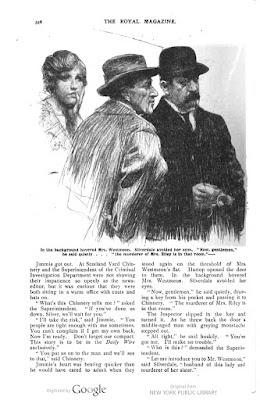 - The Online Books Page has a Dilnot listing (HERE).
- The first of four pages devoted to Dilnot is at Amazon.com (HERE).
- At one point in the story the author tells us:

"In present-day circumstances, a person with information to divulge is as likely to go to a newspaper office as a police-station. Yet, a newspaper man is sometimes a dangerous ally for a detective. His aim is essentially to tell what the police are doing to hunt down their quarry—matters on which the police do their best to keep quiet."

Haia Shpayer-Makov has examined how the newspapers and the police interacted at about the same time as our story in this paper: "Journalists and Police Detectives in Victorian and Edwardian England — An Uneasy Reciprocal Relationship" (2009) (HERE) (HTML) (25 pages as a PDF):

"Detectives are sometimes likened to historians and vice versa. On closer examination, the resemblance between detectives and journalists is no less noticeable. The latter likeness, specifically between police detectives and journalists who wrote for newspapers on crime and policing, was particularly striking during the Victorian and Edwardian periods. Interestingly, the two occupations were not only similar, but also evolved in parallel. More impor-tantly, in the process they developed links and interdependencies that helped them perform their respective duties. However, while contacts between them were mutually beneficial, they were also marked by tension and conflict. This duality of interdependence and conflict continued to characterise relations between journalists and detectives (and the police generally) after the First World War . . ." 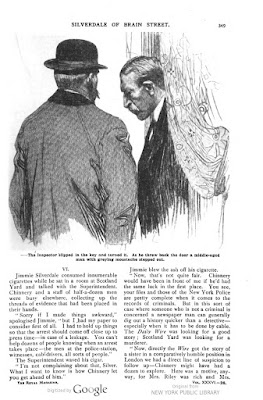