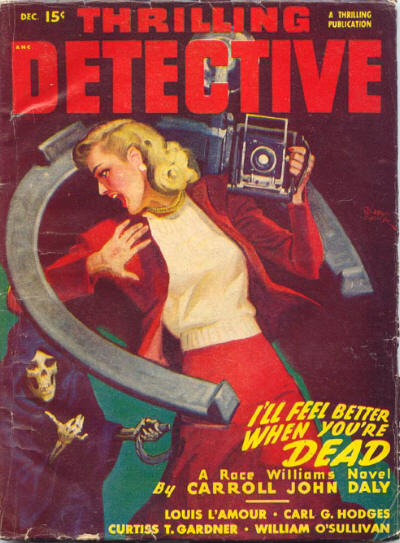 Sam is sure Les didn't murder their father, but proving who did just might be beyond his abilities . . .


Comment: Deeper characterization than usual, with even minor characters getting small but agreeable authorial highlights: "She followed him, twittering, her eyes bright"; "cold cheek"; "born on an iceberg, sired by a glacier"; "The voice was weak, but it needed no strength"; "his thick eyebrows overhung his eyes as if he and sleep had been at one another’s throats the night long"; "The plugs went in and her flurried voice whispered the open sesame"; "his creased monkey face even more creased in a grin of welcome"; "dark deacon in banker’s gray"; "the two plainclothesmen with the cold, vigilant eyes"; "a thin, gray, unrewarded spinster"; "a few economical dabs with her fingers to lay the hair over the worn spots of the fur collar"; "as the hours stretched into the silent night, feeling for the dawn, his eyes closed and his head turned sideways on the pillow, looking haunted even in sleep"; "His fingers knotted, meshed." Because of the shallow suspect pool, however, the big reveal isn't much
of a surprise. 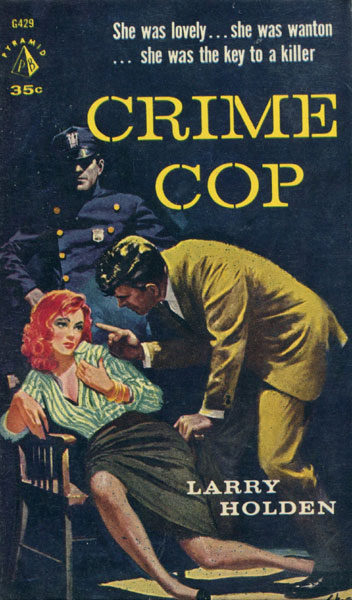 Resources:
- The FictionMags index shows that Larry Holden produced several dozen pulp tales in the sports or crime fiction genres from 1946 to 1959. His only series character, Dinny Keogh ("fat and forty"), appeared in seven issues of Mammoth Mystery (1946-47); you can find a Keogh story, one that compresses a typical Raymond Chandler novel into ten pages ("Start with a Corpse"), at Pulpmags.org (HERE; Adobe Flash Player needed).
- When he wrote for TV, Holden/Heller used the name Burt Sims (HERE); he's not to be confused with the late actor (HERE).
- Christmas mayhem courtesy of the incomparable Edward D. Hoch was covered on Steve Lewis's Mystery*File (HERE).
Posted by Mike Gray at 10:54 AM