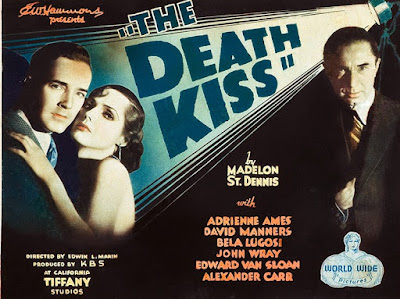 Bela Lugosi once made a whodunit. No, really:

'The Death Kiss' should be a nice surprise for those who like traditional murder mysteries. It's a movie within a movie and both have the same title . . . There are enough red herrings to keep the viewer guessing and the pacing is quite fast even with limited action sequences. — "aimless-46" on IMDb


On the surface, Edwin L. Marin's 'The Death Kiss' appears to be a return to Transylvanian terror—especially since Lugosi was joined in the cast by two other 'Dracula' principals: David Manners and Edward Van Sloan. The title and the casting seem to indicate that Lugosi would once again be creeping into sleeping maidens' boudoirs and preying on their innocence. But he doesn't.

'The Death Kiss' is full of surprises, and this is just one way in which the film toys with the audience's expectations. Not just another vampire movie, this low-budget production is actually a whodunit mystery, cleverly set on the soundstages of a financially strapped movie studio. — Bret Wood on TCM Movie Database (where there be SPOILERS).

The film was based on the 1932 novel of the same name by Madelon St. Dennis.