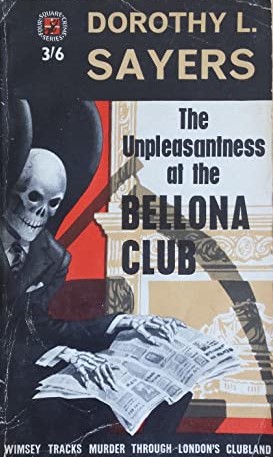 From THE BOOKMAN (October 1928, by Charles McMorris Purdy; scroll down to page 233, middle):


An example, by the way, of what disposition can be made of such a creature as the much-maligned amateur detective of the Van Dine series is to be found in the detective-murder mysteries of Dorothy Sayers.

While personally my favorite was an earlier event in the adventures of Lord Peter Wimsey, the title of which I have forgotten, but which dealt with the discovery of a strange stark-naked male corpse in a bath tub, this newest escapade of the irrepressible Lord Peter, 'The Unpleasantness at the Bellona Club,' does almost as well by her considerable following in that it varies the old chestnut about the stodgy club where one of its stodgy members exclaims, "Waiter, take that man out. He has been dead for two days".

Miss Sayers's mysteries are never intricate, but provide enjoyable enough reading,—amusing, that is, if you can enjoy Lord Peter, who is what Philo Vance might have been if he had been amusing.


This should have been a pretty good detective story. Its crimes, and the motives out of which they spring, are comparatively reasonable.

General Fentiman, grandfather—not uncle, as the jacket-blurb-writer wrongly guessed—of Major Robert and Captain George Fentiman, was found dead in a smoking-room chair at the club. He had been dead for some hours. His wealthier sister died the same morning. Because of her will it was important to learn which had died first.

Later it developed that dirty work, even murder, had been done; but this development comes too late. That's what's the matter with "The Unpleasantness at the Bellona Club." All its developments come just a little too late to knock the reader off his chair: he is given plenty of time to foresee most of the book's twists and turns, and he needs no great nimbleness to keep anywhere from one to six chapters ahead of the story. 
It's scandalous, really. Poor old General Fentiman, 90 if he was a day, sitting peacefully in his chair in front of the fireplace at the Bellona Club—a little too peacefully, it turns out. Not to mince words, the General was dead—in full rigor mortis—before anyone noticed.

You can find a spectrum of opinion on the GAD Wiki:


Another fine piece of detection by an expert, with usual great dialogue, characterization and humor. — Xavier Lechard

However, despite the brilliant evocation of the stodgy  Bellona Club . . . and the good characterisation . . . the book is ultimately a disappointment. — Nick Fuller

. . . the story . . . breaks into two halves, with each half functioning as a more or less independent novella. The first and better half, consisting of Chapters 1 - 12 and the start of the succeeding chapter, contains a real puzzle plot. The first half is also rich in genuine detection. In fact, nearly 100% of this section consists of following [Lord Peter] Wimsey on his detective efforts. — Mike Grost

Filmed for TV in 1973, with Ian Carmichael as Wimsey. 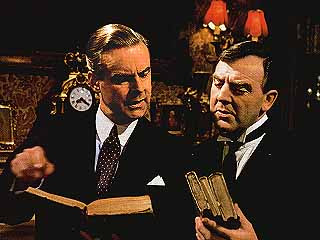