WE DON'T normally feature mystery crossovers with "horror" fiction because we feel the two genres don't really mesh well; today's story was written by an author who specialized in such mashups, but we regretfully report that the "horror" aspects of it are confined exclu-sively to how badly the writer and his editors messed it up in publication—to such an extent that you're more than justified in giving it a miss (see "Comments" below). It's the 19th ad-venture (out of 22) starring occult detective (minimized) Lucius Leffing, which goes by the name of . . . 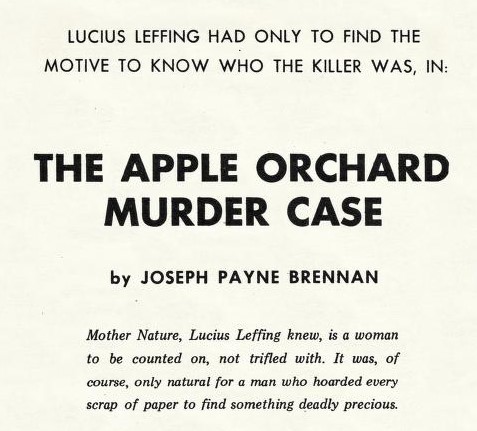 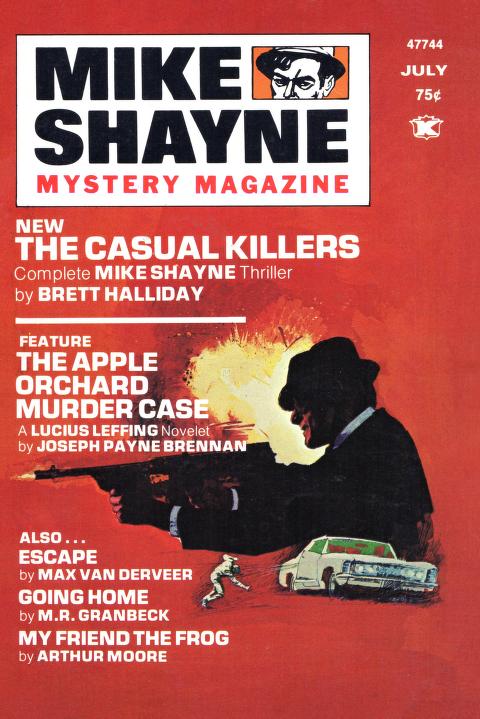 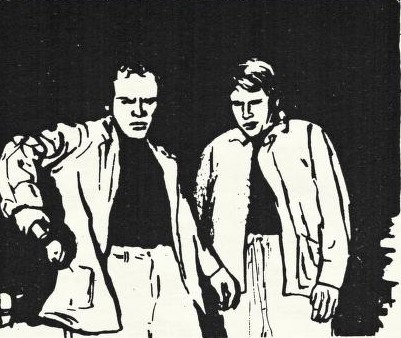 Collected in The Chronicles of Lucius Leffing (1977; TOC HERE). 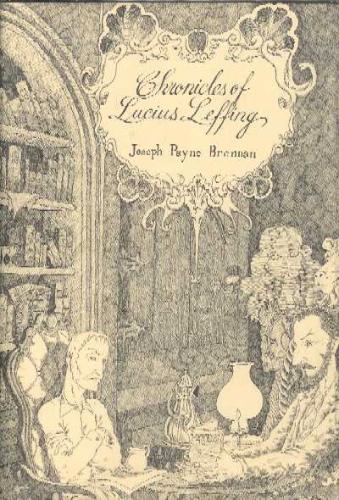 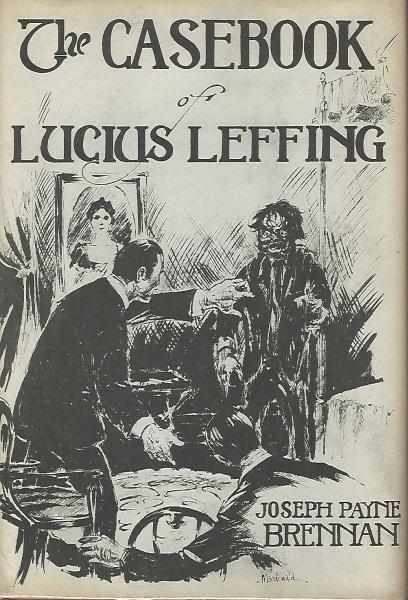 A later collection is The Adventures of Lucius Leffing (1990; TOC HERE). 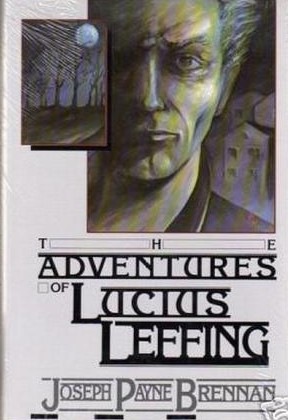 "The murder was brutal and entirely senseless."

Brutal it certainly was, but "entirely senseless"? No way . . .

Major characters:
~ Franklin Selk:
". . . was strangled in an apple orchard on the outskirts of Cresswood."
~ Mrs. Lorna Kelvin, the victim's sister:
"In spite of my brother's faults and his way of life, I loved him—we all did—and we want a thorough investigation. It was a horrible way for a poor old man to die."
~ Lucius Leffing:
"Well, Brennan, what is your opinion of the case?"
~ Brennan, the narrator:
"I hate to be eternally pessimistic, but I think you've taken on a tartar this time! The odds against a successful solution would seem to be astronomical!"
~ Chief Warwick:
"I know Mrs. Kelvin isn't satisfied with our investigation of old Franklin's death, but we've been as thorough as we know how. We just can't come up with a suspect or a motive. Everyone in town liked the old man."
~ Mrs. Conliff:
"He was carrying the bag and they found him in the orchard. Everyone here knows he scrounged around the fields and orchards . . ."

Comments: The Holmes-Watson dynamic is fully in play here, e.g., "Leffing's gas-lit Victorian living-room at Seven Autumn Street," the magnifying glass, "You know my methods, Brennan," and so forth—and, as is all too often the case with Doyle, fair
play for the reader isn't a consideration. Other editorial errors: As far as we can tell,
the killer is never properly introduced into the story and his name isn't even mention-
ed until the Reveal at the end, out of thin air; the whole thing seems unfinished, chop-
ped off at the end. A potentially good story marred by poor execution on everybody's
part.

Resources:
- "the Lost Dutchman gold mine": Another fixture of popular culture. "The Lost Dutchman's Gold Mine (also known by similar names) is, according to legend, a rich gold mine hidden in the southwestern United States. The location is generally believed to be in the Superstition Mountains, near Apache Junction, east of Phoenix, Arizona. There have been many stories about how to find the mine, and each year people search for the mine. Some have died on the search." (Wikipedia HERE). It was the entire subject of a memorable movie, Lust for Gold (1949; SPOILERS: Wikipedia HERE and the IMDb HERE). 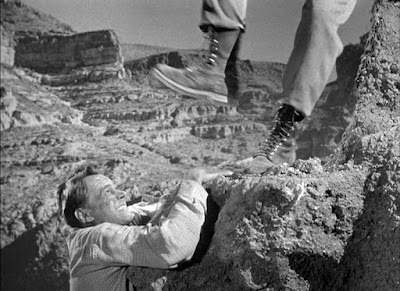 - "A 1913 Liberty-head nickel!": Be sure to check your change. "The 1913 Liberty Head nickel is an American five-cent piece which was produced in extremely limited quantities unauthor-
ized by the United States Mint, making it one of the best-known and most coveted rarities in American numismatics. In 1972, one specimen of the five cent coin became the first coin to sell for over US$100,000; in 1996, another specimen became the first to sell for over US$1 million. In 2003, one coin was sold for under three million dollars. In 2010, the Olsen piece sold for US$3.7 million at a public auction. Only five examples are known to exist: two in museums and three in private collections." (Wikipedia HERE). 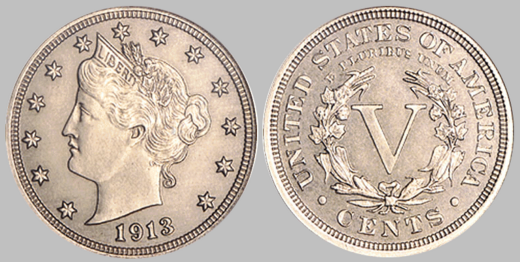 - Information about Joseph Payne Brennan is freely available at Wikipedia (HERE), the IMDb (HERE), and the ISFDb (HERE).
- About Lucius Leffing, we have this from the Wikipedia article (HERE):

In the tradition of the psychic or paranormal detective, Brennan introduced his character Lucius Leffing, a sarsaparilla-sipping occultist private detective and psychic investigator, who resides at Number 7 Autumn St, New Haven, and collects antique glass. The character first appeared in the story "The Haunted Housewife" (Macabre XII, Winter 1962-1963). Leffing was quoted, and briefly appeared at the end of the story "In The Very Stones" which appeared in Scream At Midnight (1963). Macabre published two more of his adventures ("Apparition in the Sun" and "In Death as in Life") before the series began to run in Alfred Hitchcock Mystery Magazine and Mike Shayne Mystery Magazine, where a further thirteen tales appeared prior to the 1973 publication of The Casebook of Lucius Leffing.
The stories comprising the Lucius Leffing canon are akin to the Holmes and Watson stories of Conan Doyle, and to the Solar Pons and Parker stories of August Derleth. In the stories, Leffing's adventures are chronicled by his protege and friend - Brennan himself. Three collections of Leffing stories, plus the novel Act of Providence (in which Leffing investigates the bizarre happenings at the First World Fantasy Convention) include all the stories in the series. Stefan Dziemianowicz has pointed out how Leffing's status as a psychic detective changed over time: "Leffing began life as a psychic detective, but after his third escapade, Brennan felt compelled to minimize the supernatural content of the stories to ensure their acceptance in the mystery/detective magazines. With the revival of the horror market in the 1980s, Leffing turned ghostbuster once again - a career move that mirrors Brennan's own resurrection in the horror mainstream following his years of exile in the small press".
Frank Belknap Long explains that while there had been occult detectives before, "Lucius Leffing is in all respects unique. He seldom engages in drama-
tic confrontations on a mundane human plane, and he does not shout at the reader, his clients, or anyone else. But in his scholarly reserve and quietness there is a sagacity of a high order, a brilliance that blazes and sears and shatters the horrific as if it were a vessel of glass with the deadly precision
of a rapier thrust. He has a comforting way with clients who come to him for help, for he is wise enough to know that the most fatal error a victim of dark and mysterious forces can make is to doubt his own sanity at the start. He questions nothing that he has been told until every aspect of a strangeness has been explored in depth."

- Here, courtesy of The FictionMags Index, are all of the (so far) known—and we hope better—Lucius Leffing stories. (Note: ss = short story; nv = novelette).