"One Man's Head Had Been Squeezed Completely Off"

A CYBERNETIC PERRY MASON mounts his own case for the defense . . . 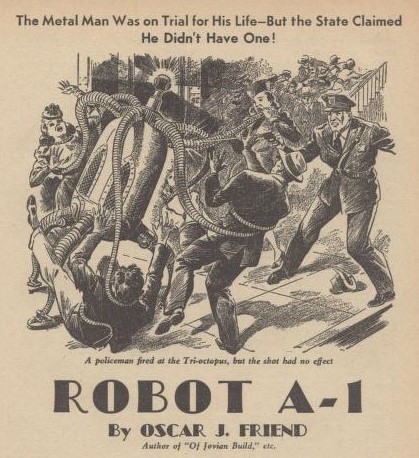 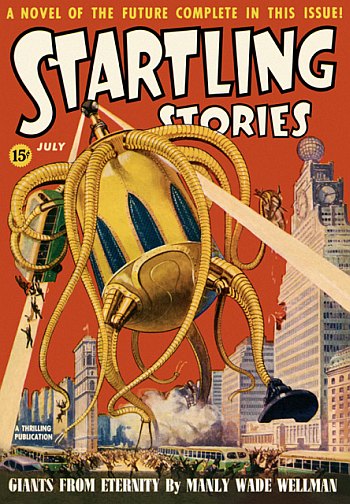 "I plead guilty of making the Tri-octopus, and not guilty of operating it to take human life."

How much culpability do inventors have for their inventions; in other words, just how far does responsiblity extend? For instance, some people would like to bring suit against gun manufacturers whenever such a weapon is used to kill someone, even though the manu-
facturer wasn't there to pull the trigger—and that brings us to the case of Robot A-1, him-
self an invention, on trial for murders committed, in turn, by his own invention . . .

Principal characters:
~ The Forsythe Mechanical Man, a.k.a. Robot A-1:
"If it please the Court, I will conduct my own defense."
~ The Tri-octopus:

". . . a seven-foot tall mechanically motivated machine which stands on three multi-joined legs and has eight cabled arms, and which was used to kill seven persons on the lower subway level at Times Square before it was fortunately knocked off the platform in front of
an express train and destroyed."
~ Judge McElvery:
"Is the counsel for the defense invisible or not prepared?"
~ Robert Chaldow:
". . . a thin-nosed man with the hands of a skilled mechanic, took the stand, looked nervously at Robot A-1, and gave his testimony in a jerky, high voice."
~ Mr. Martin:
"I object! The hearsay gossip of the witness has no bearing on the question."
~ Miss Marie Lemar:
". . . identified them as particles of the seven-foot monstrosity that had slain several
people in the subway."
~ Lamkin:
"I tell you that—that thing has a personality."
~ Robbins:
"My God, Lamkin! Look!"

Resources:
- "indicted June twenty-first for the manufacture of . . .": "In criminal law, strict liability is liability for which mens rea (Latin for 'guilty mind') does not have to be proven in relation to one or more elements comprising the actus reus (Latin for 'guilty act') although intention, recklessness or knowledge may be required in relation to other elements of the offense.
The liability is said to be strict because defendants could be convicted even though they were genuinely ignorant of one or more factors that made their acts or omissions criminal. The defendants may therefore not be culpable in any real way, i.e. there is not even criminal negligence, the least blameworthy level of mens rea." (Wikipedia HERE).
- "like the locks of a metal Medusa": Never look her way. "In Greek mythology, Medusa ('guardian, protectress') was a monster, a Gorgon, generally described as a winged human female with living venomous snakes in place of hair. Those who gazed into her eyes would turn to stone." (Wikipedia HERE). 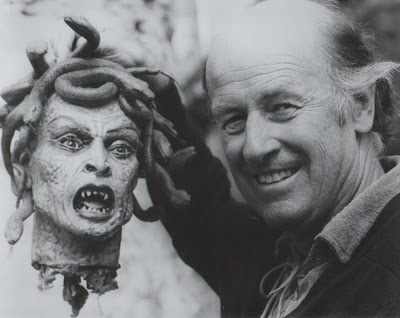 - "rocked into Times Square": Until recently a very busy place. "Times Square is a major commercial intersection, tourist destination, entertainment center, and neighborhood in
the Midtown Manhattan section of New York City, at the junction of Broadway and Seventh Avenue. Brightly lit by numerous billboards and advertisements, it stretches from West
42nd to West 47th Streets, and is sometimes referred to as 'the Crossroads of the World',
'the Center of the Universe', 'the heart of the Great White Way', and 'the heart of the world'. One of the world's busiest pedestrian areas, it is also the hub of the Broadway Theater District and a major center of the world's entertainment industry." (Wikipedia HERE).
- We have run into robots quite a few times, the latest being Henry Kuttner and C. L. Moore's far more sophisticated story "Two-Handed Engine" (HERE); Adam Link, the ethical robot, experienced a similar situation to that of A-1 in "I, Robot", except that Adam had a human mouthpiece (more HERE). 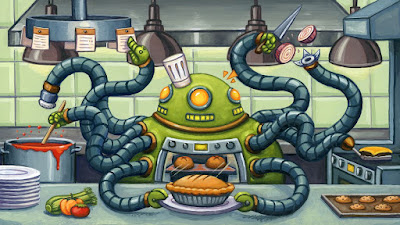 - Our first sample of Oscar Jerome Friend's fiction was "I Get Off Here" (HERE). 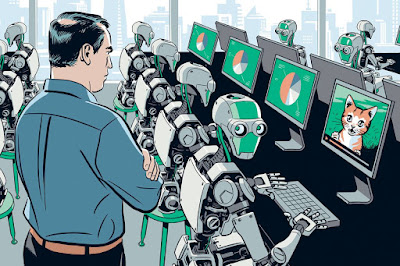