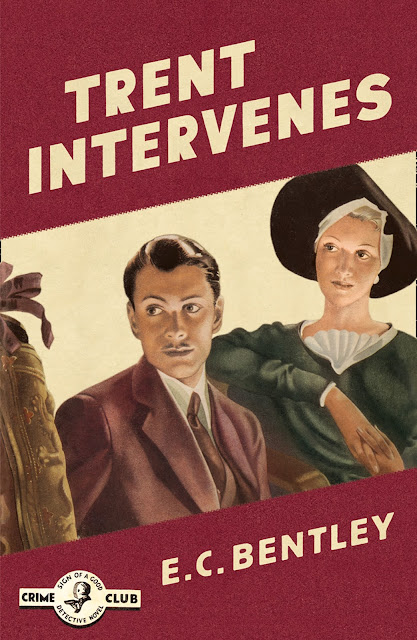 Bentley has been called "the father of the Golden Age of detective fiction." Here are various thoughts from various sources:

All lovers of literary crime may be grateful for the fact that when that splendid novel, 'Trent's Last Case', appeared, Mr. Bentley didn't say positively. Here in 'Trent Intervenes', Mr. Bentley has done something valuable for detective fiction. He has been at once episodic and exciting, at once casual and satisfy-ing. Suavity and melodrama, leisureliness and suspense, go hand in hand. The twelve stories are far above the ruck, with never so much as a veiled insult to the reader's intelligence. — S. S. Van Dine, "Books," SCRIBNER'S (January 1939)

. . . several of the stories in 'Trent Intervenes' are pretty good, and quite a number have been anthologised over the years, sometimes a number of times. My favourites include ‘The Genuine Tabard’, ‘The Inoffensive Captain’ and ‘The Clever Cockatoo’. Philip Trent is an amiable character, an artist, journalist and urbane man about town – where are his modern equivalents?! He investigates rather languidly at times, but Bentley was a capable writer, and even the slighter tales are perfectly readable. — Martin Edwards, DO YOU WRITE UNDER YOUR OWN NAME? (22 October 2010)

Trent does most of his sleuthing by engaging in conversation with members of the working class and lower middle class, and painlessly extracting information from them in passing, about the upper class suspects with whom they have been in innocent contact. These working class characters are usually shown to be nice pleasant people, although occasionally they can be crooked.

Trent is suave, smooth and debonair, not to mention exquisitely well mannered and correct, and is intended to be the opposite of the dramatic, eccentric sleuths of other writers. He is a decently behaved upper middle class professional man, who is always polite to the tradesmen with whom he comes into contact.

It is a relation that can have all sorts of political meanings read into it: there is almost an economy of information, which flows from the workers to the upper middle class Trent.

Bentley's stories are short and to the point, with little excess baggage. But they often come in pairs, with each being a variation on a theme.

This doubling allows Bentley to explore new ideas, but which are related to the plot of a previous tale. It also gives the collection as a whole a sort of artistic unity. There are other parallelisms which run orthogonal to these story pairs: there are two stories with mischievous animals, and two tales with courageous young girls who are down on their luck. — Mike Grost, GAD Wiki ("Trent Intervenes")