"He Felt a Warm Sense of Coming Adventure" 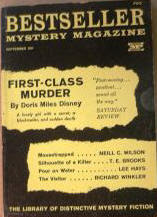 "The fat man was a clever manipulator with a foolproof racket. He depended on the dishonesty of his victims and his own ability to recognize their potential. The young
woman with the smudge on her cheek was, he decided, a gold mine . . ."

Some people are always, as the saying has it, ahead of the curve; consider the dysfunctional couple of "Oodles" and "Toodles" . . .

The characters:
~ The fat man:
"He hung up, feeling a tingle. This could be a real break."
~ Tony:
"Sure mister, I losa heem."
~ A shifty-eyed man:
"Shifty-eyes took out a wallet, paid and scuttled away with his envelope."
~ The young woman:
"A woman scorned, you know."
~ Mr. Talbott:
"Where are those letters? If I ever get my hands on that vixen—" 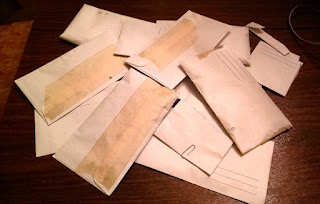 Resource:
- The FictionMags listing for Neill Compton Wilson indicates that he saw his greatest productive period in the early '40s to the early '60s, entirely in the high-paying slicks,
nearly all of his work outside the crime fiction field.
Posted by Mike Gray at 3:22 PM