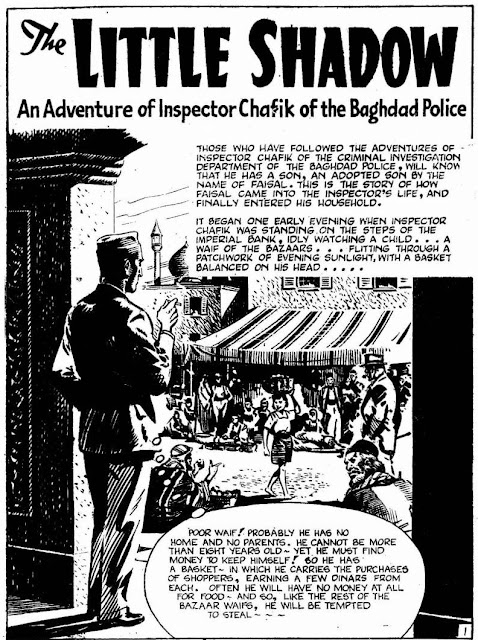 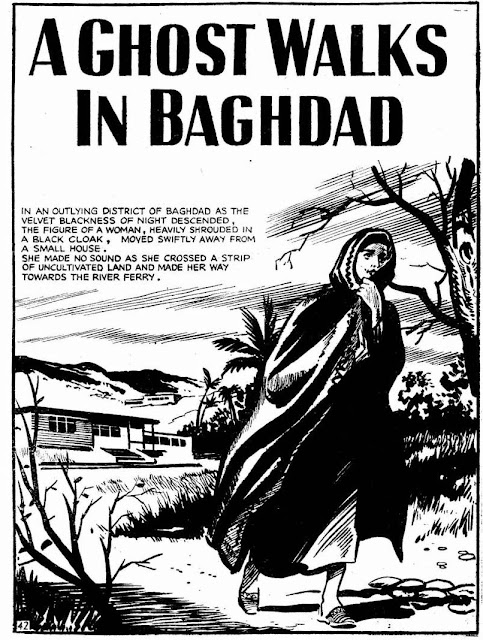 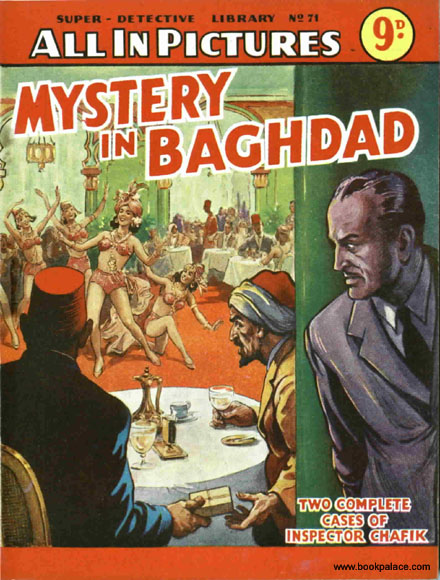 Characters created by Charles B. Child (Claude Vernon Frost, 1903-93).
Graphic novel (64 pages).
Two stories: "The Little Shadow" (pages 3-43) and "A Ghost Walks in Baghdad" (pages 44-66).
Online at Comic Book Plus (HERE).
"There is a saying sir. When in doubt, do nothing."
In "The Little Shadow" Inspector Chafik is stymied by an epidemic of crimes related to hashish, while in "A Ghost Walks in Baghdad" he must determine who has murdered an Englishwoman and what is significant about a missing bronze statue.
Principal characters:
(1) "The Little Shadow": 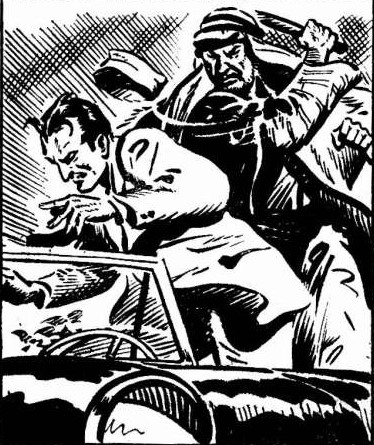 ~ A brutal drug addict, Faisal, Sergeant Abdullah, Leila, Najar Helmy, Ali, and Inspector Chafik J. Chafik.
Once more we have "the moment": "A graph! The key! The clue—the formula!" leading to "We have it then! This two week period when the graph flattens—when no hashish came to Baghdad!"
Reference:
- "The hashish smuggler": "Hashish, also known as 'hash', is a drug made by compressing and processing trichomes of the cannabis plant. It is consumed by smoking, typically in a pipe, bong, vaporizer or joint, or sometimes via oral ingestion. Hash has a long history of usage in eastern countries such as Afghanistan, India, Iran, Morocco, and Pakistan. Hash consumption is also popular in Europe, where it is the most common form of cannabis use." (Wikipedia HERE).
(2) "A Ghost Walks in Baghdad": 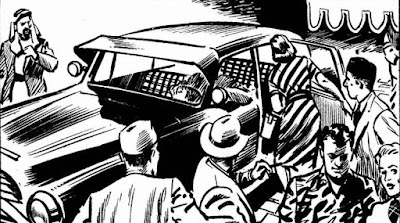 ~ The boatman, Leila, Sergeant Abdullah, Violet Shaw, Madame Dejano, Daoud Shuman, Mr. Dejano, and Inspector Chafik J. Chafik.
Resources:
- We've covered Charles B. Child's short stories about The Sleuth of Baghdad before, in 2016 (HERE) and 2019 (HERE); you'll also find links to other online stories in those postings. Child's list of Chafik J. Chafik stories is presently residing (HERE), but that's subject to change. It's no coincidence that there are strong similarities between "The Little Shadow" and Child's Collier's story "He Had a Little Shadow" (1950), which was his sixth published case. 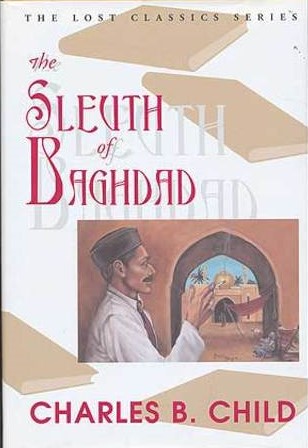