A BURLESQUE is "a literary, dramatic or musical work intended to cause laughter by caricaturing the manner or spirit of serious works, or by ludicrous treatment of their subjects" (Wikipedia; HERE).

Although it helps to be familiar with the work being burlesqued, in the following instance (transmuting a self-improvement book into a crime story) written by the man who gave us Winnie the Pooh (and, incidentally, just as funny as the man who gave us Jeeves), we think you'll agree that it isn't necessary to know anything at all about Eustace Miles and his serial Healthward Ho! to get a kick out of it . . . 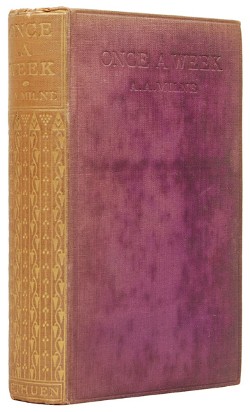 Short short short story (3 pages as a PDF).
Online at Project Gutenberg (HERE) or, failing that, (HERE; scroll to TOC).
(Note: Gutenberg URLs are slippery; it might require several clicks to get there.)

"Roger returns home quickly, and decides to practise breathing through the ears."

As usual with the best comic writers, we'll refrain from further comment and let the author work his charms.