"One Day - He Never Knew When - the Jailer Would Turn Executioner"

ACCORDING TO ANTHONY BOUCHER, the editor of Fantasy & Science Fiction at the time, what we have here is . . .

". . . a novelet of future crime and justice — at once an exciting melodrama, a terrifying nightmare . . . and a sort of poetic-theological statement concerning man and his soul."

That's quite a load for a short work of fiction to carry, but we think the husband and wife team sometimes known as Lewis Padgett manage to pull it off . . .

"The trigger pressed his finger and the revolver kicked back against his palm, and the spurt of the explosion made the air hiss . . ." 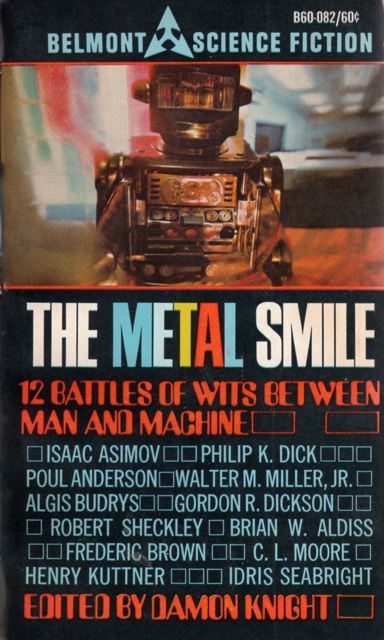 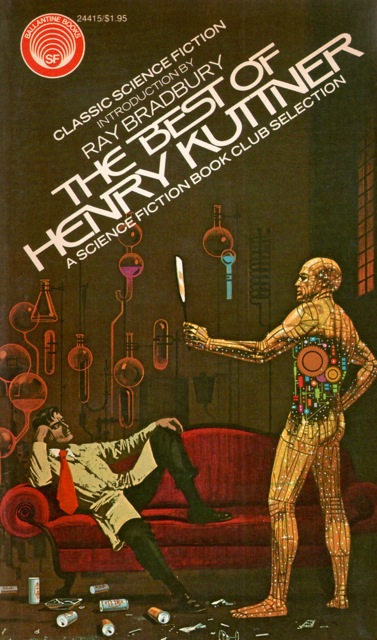 . . . something that any sensible person would reject out of hand, but there's a jackpot at the end of that illusive rainbow: "A life of luxury. I know you're not a fool. I know damned well
you wouldn't do what I ask unless you got money and protection. That's what I can offer. Protection." Didn't a serpent making the rounds of a certain garden once make a similar proposal? And that was a lie, too . . .

"They saw him take a sudden, deep breath, and break into a run."
~ The Furies:
"They were very efficient. They were never wrong. Or at least, in theory they were

"He was quite drunk that night, and he followed the beggar until the man threw the
money back at him and thrust himself away rapidly on his wheeled platform . . ."
~ O'Reilly:
"Your hand pulled the trigger, not mine." 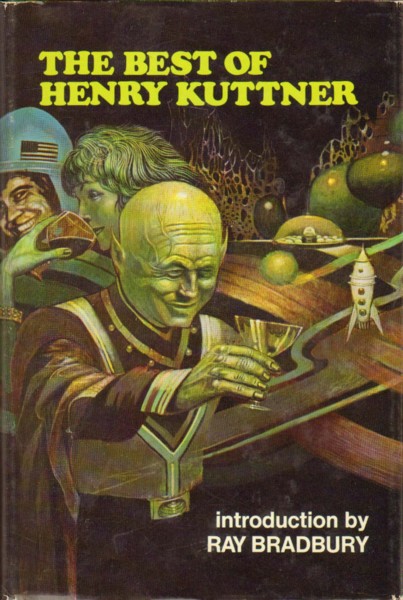 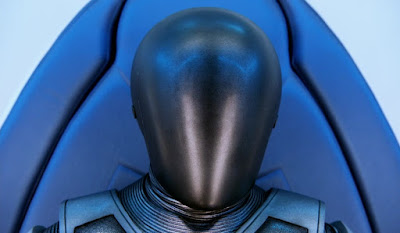 Resources:
- Find Henry Kuttner (HERE) and Catherine Lucille Moore (HERE) on the ISFDb and follow the links from there.
- REFERENCES: The "two-handed engine," the obscure and abstract term used in the title, comes from John Milton's 1637 poem Lycidas (Wikipedia HERE and The John Milton Read-ing Room HERE); what exactly Milton meant by it has been booted about for centuries, but Kuttner and Moore give it a more concrete meaning here.
~ "Ever since the days of Orestes there have been men with Furies following them. It wasn't until the Twenty-Second Century that mankind made itself a set of real Furies, out of steel.": An allusion to a cycle of plays by Aeschylus:

"Featured in ancient Greek literature, from poems to plays, the Erinyes form the Chorus and play a major role in the conclusion of Aeschylus's dramatic trilogy the Oresteia. In the first play, Agamemnon, King Agamemnon returns home from the Trojan War, where he is slain by his wife, Clytemnestra, who wants vengeance for her daughter Iphigenia, who was sacrificed by Agamem-non in order to obtain favorable winds to sail to Troy. In the second play, The Libation Bearers, their son Orestes [HERE] has reached manhood and has been commanded by Apollo's oracle to avenge his father's murder at his mother’s hand. Returning home and revealing himself to his sister Electra, Orestes pretends to be a messenger bringing the news of his own death to Clytem-nestra. He then slays his mother and her lover Aegisthus. Although Orestes’ actions were what Apollo had commanded him to do, Orestes has still commit-ted matricide, a grave sacrilege. Because of this, he is pursued and tormented by the terrible Erinyes, who demand yet further blood vengeance."

. . . the Erinyes (Wikipedia HERE), also known as the Furies, being multi-purpose deities in Greek mythology:

"The Erinyes live in Erebus and are more ancient than any of the Olympian deities. Their task is to hear complaints brought by mortals against the insolence of the young to the aged, of children to parents, of hosts to guests, and of householders or city councils to suppliants—and to punish such crimes by hounding culprits relentlessly. The Erinyes are crones and, depending upon authors, described as having snakes for hair, dog's heads, coal black bodies, bat's wings, and blood-shot eyes. In their hands they carry brass-studded scourges, and their victims die in torment."

~ ". . . it operated on a basis of incorruptible machines. They made and enforced the laws
that were necessary now to keep mankind alive.": This sounds like a sly take on Gort, the
police robot from the first version of The Day the Earth Stood Still (1951; Wikipedia HERE; SPOILERS); it would be surprising if Kuttner and Moore didn't have Gort in mind. It's probably no coincidence, either, that the Justice Machines in the Doctor Who serial
The Stones of Blood call themselves the Megara (The Doctor Who Wiki HERE). 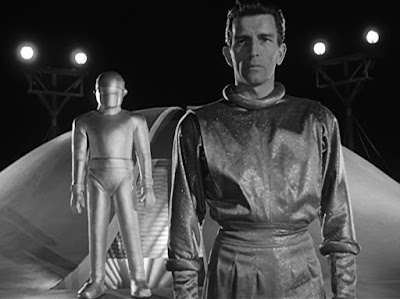 ~ "Upon that moving island two occupants dwelt, like a Crusoe and a Friday, alone.": A reference to the two main characters in Daniel Defoe's 1719 novel (Wikipedia HERE).
~ ". . . to rebuild in man a realistic superego to save him from extinction.": Freudian psychology (Wikipedia HERE), enormously popular in the 1950s.
~ "Quis custodiet, Hartz thought. The old problem.": The full phrase is "Quis custodiet
ipsos custodes?" ("Who will watch the watchers?") (Wikipedia HERE).
~ "The incorruptible metal was putting on corruption . . .": An inverted Biblical allusion (HERE). "It was as if sin had come anew into the world, and the first man felt again the
first inward guilt.": Another Scriptural reference (HERE).
- It's understandable that Milton would inspire Edmund Crispin, at least with his story
titles—"Humbleby Agonistes", "Within the Gates", "Abhorred Shears", etc.; see our
review of Beware of the Trains (HERE). 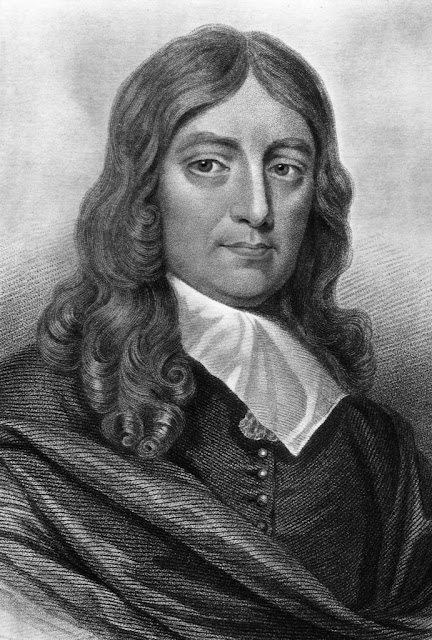