"Mr. Shrig Became So Extremely Attracted by This Small Pile of Fallen Cigar-Ash That He Plumped Down Upon His Knees Before It, Much As If in Adoration"

IT'S WELL KNOWN that John Dickson Carr had a yen for stories set in more glamorous (to him, anyway) times, especially the Regency and Georgian Periods, when swashbuckling adventure seemed to be around every corner. Jeffery Farnol was even more susceptible to wanting to buckle a swash and specialized in fiction set in those eras (see "Resources" below). Today's story features shrewd Bow Street Runner Jasper Shrig, a character Farnol featured in novels and at least one short story beginning in 1912; "Footprints" was a nar-rative that Ellery Queen (the editor) couldn't pass up. 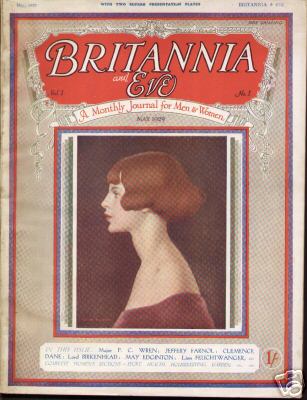 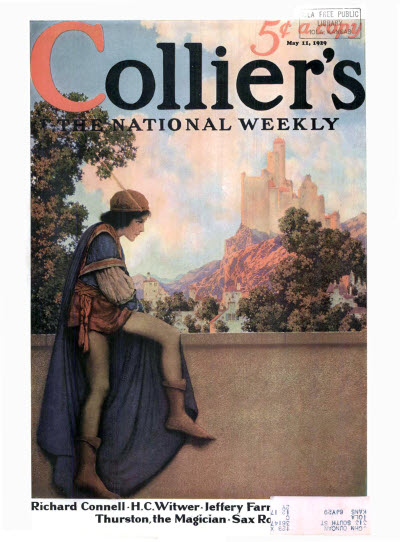 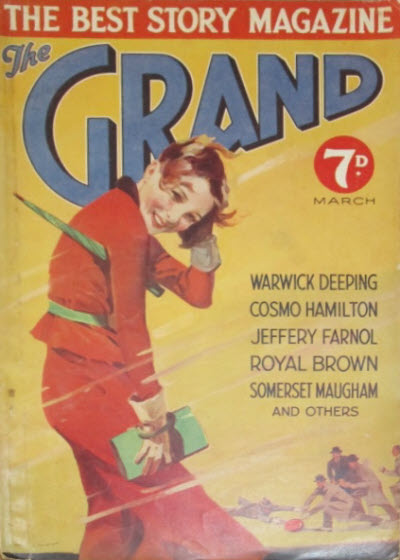 Online at Fadedpage (HERE; no illos) and UNZ (PDF; starting HERE and finishing HERE, scroll down to page 44; 2 fuzzy illos). 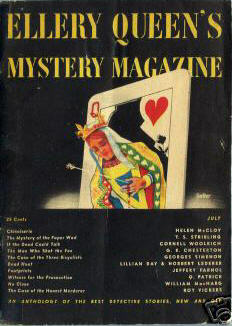 "Who killed Sir Gregory Glendale? Jasper Shrig had to find out quickly; but clues were so scarce that he had to help make them himself . . ."

"The big corporal, who had faced unmoved the horrors of Waterloo, blenched at the thing
in the chair which death had smitten in such gruesome fashion amid the comfort of this luxurious room."
~ Jasper Shrig of Bow Street:
"Ay, 'e's pretty considerable dead, I never see a deader, no! And yet, in spite o' the gore, 'e looks werry surprisin' peaceful ... werry remarkably so! ... Killed by a downward stab above the collar-bone, lookee, in the properest place for it.... A knife or, say a dagger and same wanished ..."
~ Adela Glendale:
"Oh, be kind to me now, believe in me now ... for tonight ... it has happened again ... horrible! Oh, God help me, it has happened again!"
~ John Winton:
"What new horror is this—?"
~ Roger Glendale:
". . . I'm a log! I'm Death-in-Life, a living corpse, live brain in dead body—look at me!"

Concise phraseology that sets the scene:

"A stately chamber whose luxurious comfort was rendered cozier by
the bright fire that flickered on the hearth with soft, cheery murmur;
and before this fire a great, cushioned chair from which was thrust a
limp arm that dangled helplessly with a drooping hand whose long,
curving fingers seemed to grope at the deep carpet." 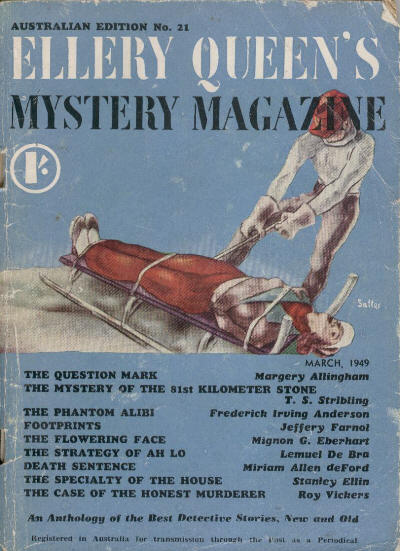 Resources:
- REFERENCES: ~ "late of the Grenadiers": A grenadier was "originally a specialized soldier, first established as a distinct role in the mid-to-late 17th century, for the throwing of grenades and sometimes assault operations. At that time grenadiers were chosen from the strongest and largest soldiers. By the 18th century, dedicated grenade throwing of this sort was no longer relevant, but grenadiers were still chosen for being the most physically powerful soldiers and would lead assaults in the field of battle. Grenadiers would also often lead the storming of fortification breaches in siege warfare, although this role was more usually fulfilled by all-arm units of volunteers called forlorn hopes, and might also be fulfilled by sappers or pioneers." — Wikipedia (HERE).
~ "the hand lost at Waterloo": Considering who he was fighting, he's lucky he didn't lose more than that. — Wikipedia (HERE).

~ "a occasional chimbley-pot": "A chimney pot is placed on top of the chimney to expand
the length of the chimney inexpensively, and to improve the chimney's draft. A chimney
with more than one pot on it indicates that multiple fireplaces on different floors share
the chimney." — Wikipedia (HERE).
~ "I don't quite twig you": A Briticism still in use: "to look at; observe", "to see; perceive,"
or, most likely here, "to understand." — Dictionary.com (HERE).
~ "his own glass of the 'One and Only'": A toddy. — Dictionary.com (HERE).
~ "clapped hand to fob-pocket": Part of men's fashion for centuries and an incriminating detail in our story. — Wikipedia (HERE).
~ "the delicate Sèvres cup and saucer": A French specialty as well as another clue. — The
Free Dictionary (HERE).
- Although Jasper Shrig is a fictional character, the Bow Street Runners were real enough:

"The Bow Street Runners have been called London's first professional
police force. The force originally numbered six men and was founded in
1749 by magistrate Henry Fielding, who was also well known as an author. Bow Street runners was the public's nickname for the officers, 'although
the officers never referred to themselves as runners, considering the term
to be derogatory' [Ruthven quote]. The Bow Street group was disbanded
in 1839."
— "Bow Street Runners," Wikipedia (HERE).

- According to Fadedpage (HERE), John Jeffery Farnol was "a British writer since 1907
until his death, known for writing more than 40 romance novels, some formulaic and
set in the Georgian Era or English Regency period, and swashbucklers, he with Georgette Heyer founded the Regency romantic genre." More information: A Wikipedia article is
(HERE), The Jeffery Farnol Appreciation Society webpage is (HERE), and The Jeffery
Farnol Pages are (HERE).
- The Saturday Review characterized one of our protagonist's book-length adventures
this way:

"Jasper Shrig is a sort of a nineteenth century Sherlock Holmes. Thrilling events follow each other with the startling rapidity of machine gun fire on a still night. The hero’s villainous Uncle is found with a dagger run through his throat. Shrig is almost strangled to death in a subterranean passage. A ghost walks. Young David, the hero, knocks out several Goliaths with his American trained fists, and beautiful girls are often in peril of their virtue."
— The Saturday Review, April 4, 1925