"It Was with Something of a Shock That I Found Myself Looking Directly Along the Barrel of a .45 Automatic Pistol" 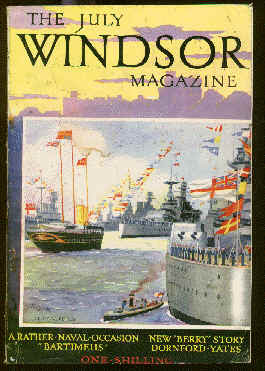 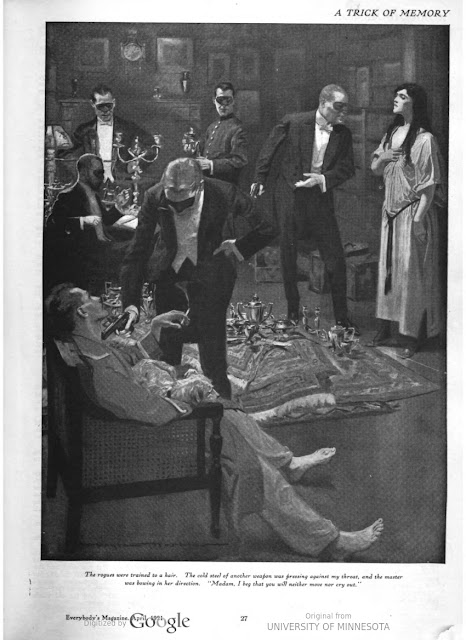 "The monstrous audacity of the proceedings and the business-like way in which they were conducted, were almost stupefying."

Cave canem is a piece of wisdom dating from Roman times, if not before; it's also good advice for a suave burglar who thinks he has everything under control, which he actually does—until he meets Nobby . . .

Comment: When it comes to burglars, we think the artist has miscounted. 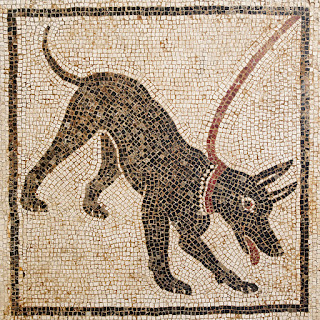 Resources:
- Wikipedia has some information about Dornford Yates (HERE), as does ibooknet.com (HERE). Even better is G. A. Michael Sims's reference page (HERE), which provides a fine bibliography as well as this background information on the Pleydell series:

"The main characters of the Berry Books are the Pleydell family who reside at 'White Ladies' in Hampshire, comprising:
Berry Pleydell
Daphne Pleydell, his wife (and cousin)
Boy Pleydell (Daphne's brother and narrator of the books)
Jonathan (Jonah) Mansel (cousin to all the above)
Jill Mansel (Jonah's sister)
with occasional appearances by Boy's American fiancée (and later wife), Adèle. Comment has been made about the parallel between the 'Boy' character and 'Dornford Yates' himself, both of whom were barristers and married to and then separated from an American but it was never admitted that the character was autobiographical."

- As long ago as eight years, David L. Vineyard clued us in on the Pleydells' adventures:

"From the early twenties into the fifties, Yates wrote some of the most delightful books of his era. The Wodehousian books about Berry and Company are light-hearted romps featuring upper middle class Englishmen and women and their hijinks at home and abroad (smuggling of goods to avoid the duties was virtually a sport in Yates novels). The tone is light and playful, and the books retain much of their original charm."
— "Dornford Yates and the Clubland Heroes," Mystery*File, May 15, 2009

- There were quite a few stories involving Berry and his family, many of them being recently reprinted; see (HERE) for more info.
- We last bumped into Dornford Yates (HERE) in an OLD-TIME DETECTION review, well over a year ago. 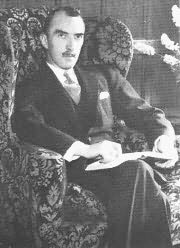