"It Means That the Murderer Is Aboard Now!"

THE SUPER DETECTIVE LIBRARY was comprised of high-quality British comic books with more than the usual attention to plot and character, basically precursors to the graphic novels (HERE) of today; Comic Vine (HERE) characterizes them this way:
Super Detective Library [S.D.L.] was a digest sized, 68 page comic with painted covers and black and white interiors that ran from 1953 to 1960 and appeared twice a month. It featured a rotating roster of detective and science fiction stories from English, Canadian and American artists and writers, and an artistic and writing style that you don’t see anymore. Most issues were original stories and art, however they would from time to time fill the S.D.L. with reprints of newspaper strips such as America’s Rip Kirby.

We intend to feature a few of the titles in the Super Detective Library, but if you want to browse the entire collection, go to Comic Book Plus (HERE), where at the moment they have 124 books available.
In today's story Rick Random, the first detective of the spaceways, has his hands full as . . .
"Crime Rides the Spaceways."
Super Detective Library No. 37, 1954. 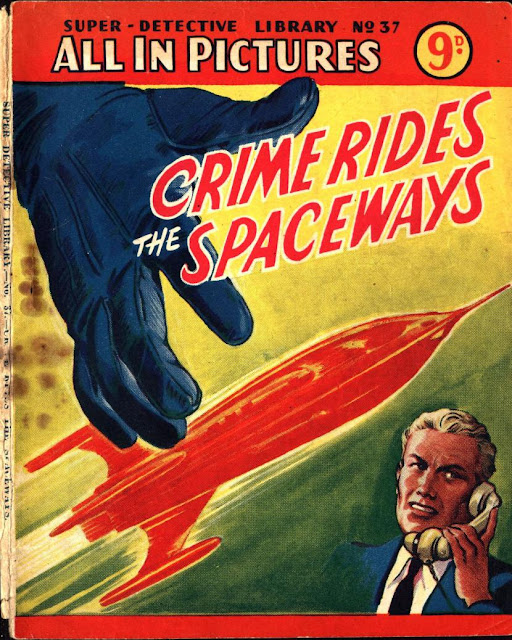 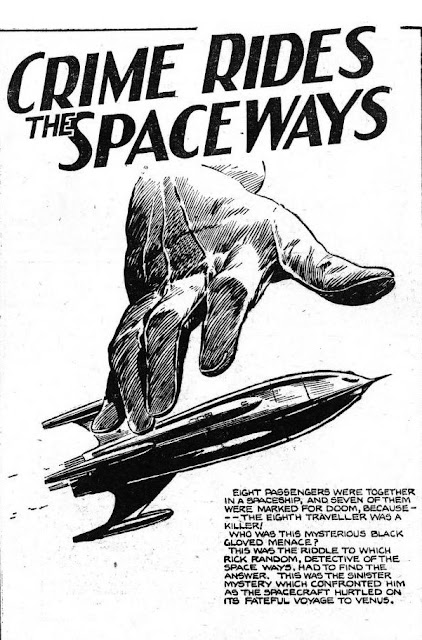 "It's murder, Captain. The man in Cabin 4."
You'd be fully justified if you think of And Then There Were None as you read our story . . . .
Principal characters:
~ Anna Martin:
"Stateless Female: Died, Duember 2003 A.D."
~ Black Glove:
"I will judge who is to blame."
~ Franks:
"Murder! I'm not getting mixed up in that."
Suspects and potential victims:
~ John Ordway, Isabella Mancini, Carl Fliedman, Julie Jason, Otto Mayer, Kurt Listgaard, Inga Haussen, Colonel and Mrs. McCloud, and Vance Lane, captain of the "Stellar."
The sleuth:
~ Rick Random of the Interplanetary Bureau of Investigation:
"Eight passengers and a crew of six! One, a murderer."
Typo: "the altitude of the spacer".

References:
- For decades good old Venus, enshrouded in impenetrable clouds, could be anything a writer might imagine, from a desiccated desert to a giant swamp swarming with dinosaurs; see Wikipedia (HERE) for the imaginary Venus and (HERE) for what science tells us now. 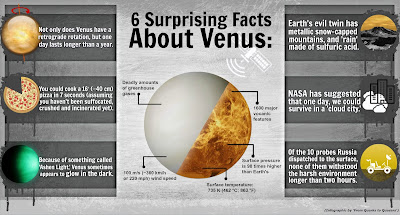