"A Crime So Grewsome and Diabolically Conceived"

"The Adventure of the Norwood Builder."
By Arthur Conan Doyle.
Short story.
First appearance: The Strand, 1903.
Collected in THE RETURN OF SHERLOCK HOLMES (1905).
First filmed in 1912 as THE HYPNOTIC DETECTIVE.
Filmed for TV in 1985.
Online HERE and HERE. 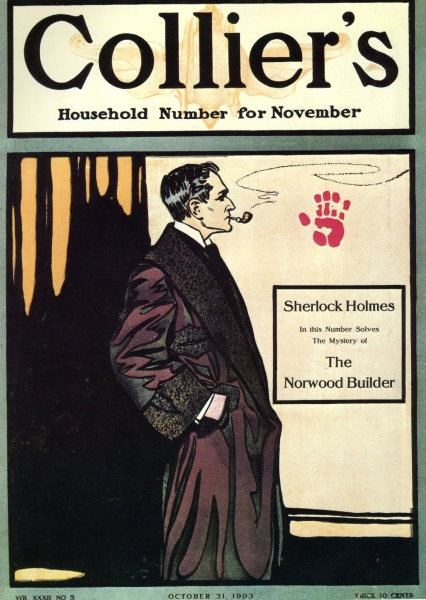 An early film company decided to do a Sherlock Holmes movie without Sherlock Holmes—at least, without naming him Sherlock. SPOILER ALERT: Since almost none of us can expect to see this rare film (a print of which is at UCLA), we're reproducing the blabber-mouthed reviewer's article in full, in the hopes that you have already read the story or seen the Jeremy Brett version:

At last we have had a chance to greet our old friend Mr. Sherlock Holmes, of Upper Baker Street, in the moving pictures. The fact, however, that he appears under the name of Professor Locksley, that he sports a long moustache and carries a monocle, leads to the grave suspicion that the presentation has not been authorised either by Sir Arthur Conan Doyle or by the publishers of his books.

Be that as it may, "The Hypnotic Detective" is in every incident "The Adventure of the Norwood Builder" of The Return of Sherlock Holmes.

The film play opens with a scene showing the rascally builder being refused by the mother of the hero and threatening dire vengeance. The second scene shows the hero, a young solicitor, in his office in the city. The builder enters, tells him that he has decided to make him his heir, and requests him to go that night to the country to draw up the will.

In his country home the builder and two accomplices, a woman housekeeper and a man-servant, await the coming of the victim. Tom Norton—that is the name the hero bears in the play—arrives, the will is drawn, and Tom takes his departure after vainly looking for his walking stick, which has been secreted by the housekeeper.

Then the builder proceeds to disappear after planting evidence that will throw suspicion on Tom Norton. The walking stick is broken as if in a struggle, a dummy figure dressed in the builder's clothes is placed in an outhouse which is fired, and the builder and the man-servant, plentifully provided with provisions, hide in a secret chamber in an upper story of the residence. The fire in the outhouse draws the fire department and the constabulary, and the housekeeper, questioned, gives evidence that points to Tom as the murderer of the missing builder.

The next morning Tom, in his lodgings, picks up the paper to read of the supposed crime and his alleged share in it. The police are already on his track and their knocking is heard at the door as he slips out of a window to go seek the advice of the eminent Professor Locksley, the hypnotic detective. The latter, as we have said, is of rather a Watsonian than a Sherlockian mien. After the manner of the stage Englishman he tugs at his long moustache as he listens to Tom's story, and reassures the excited youth just as the police arrive to effect the arrest.

A brief glimpse of Tom in his prison cell and then back to the house of the builder with Professor Locksley arriving on the scene to begin his investigations. The police in charge think they have a convincing case against Tom and greet the professor with ill-concealed amusement. The housekeeper, however, recognises a dangerous foe.

Through his monocle Locksley examines everything everywhere and finally recognises that discrepancy in the plans of the house which conceals the secret chamber.

A little episode which is not drawn from the Doyle story is that which precipitates Locksley through a trap door to a cellar, where he is confronted by the man-servant accomplice who holds a pistol in his hand. Here the professor's hypnotic eye comes into play, he disarms the cowed accomplice and delivers him into the hands of the official police, and the moment has come for the last scene of the little drama.

It is not worth while to hunt for the missing builder; a better idea would be to make him disclose himself. Piles of straw are lighted and clouds of smoke roll up into the secret room where the builder has been chuckling over the success of his evil plans. Forgetting everything but what he believes to be his imminent peril, the builder rushes forth into the hands of Professor Locksley and the police. — "Chronicle and Comment: Sherlock in the Films," THE BOOKMAN (October 1912)