"Why Would a Man Hire a Detective to Hunt for Him?" 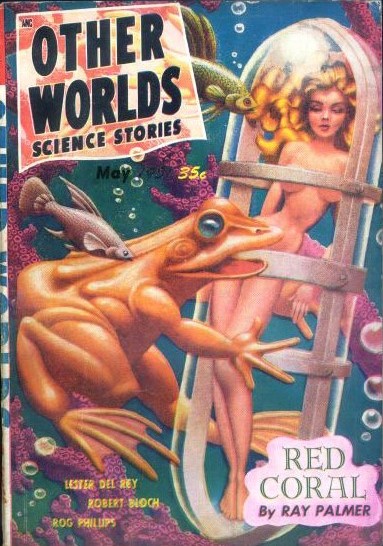 "Business hadn't been too good for Gus Harper, so he welcomed a chance to take on a routine 'missing person' case. Routine, that is, until The Man From Mars made his appearance."

You remember that Hitchcock movie about the corpse that kept turning up everywhere, don't you? Private detective Gus Harper has a similar problem, only the "corpse" is very much alive and able to get around faster than normal people ordinarily do; and not only that, he wants Gus to find him—that is, his other self. Suddenly for our harried private eye, even a divorce case, never pleasant but gratifyingly uncomplicated, is looking a lot better than it used to . . .

Characters:
~ Gus Harper:
"To sum Gus Harper up in one brief statement, he was not brilliant, but he was a genius. A contradiction of terms? No."
~ G. Harper:
"'I see,' Gus said dryly. 'You didn't exist at all, and in order to exist you had to make people believe you exist.'"
~ Joe Purvis:
"'I think I have enough for your fee, or can get it. I have three thousand, two hundred and eighty dollars left in the bank, and Mr. Blake said he'd be glad to loan me the rest on my farm.' Gus stared at him, his eyes large and round."
~ Irma Purvis:
"Through the glass in the door Gus saw a young lady of perhaps twenty, looking very nice and homey in a bright print dress, stirring something in a steaming kettle over a spotless electric range. His estimation of Joe Purvis shot up ten thousand percent."
~ The Man from Mars:
"Gus turned his attention back to 'the man from Mars' with a new understanding of why Joe Purvis had been willing to put out the fabulous sum he had firmly believed all private investigators get for a morning's investigation. It could be worse than having a mother-in-law live with you." 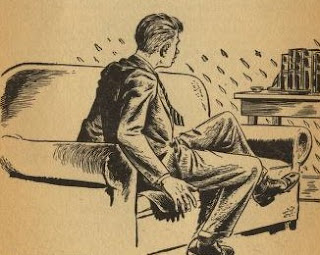 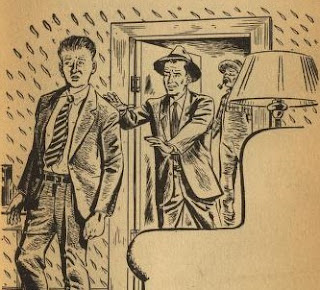 ~ ~ ~
IN ADDITION TO SFF Rog Phillips also wrote a substantial amount of crime fiction, a prime example of which appears below:

"It was a perfect murder." 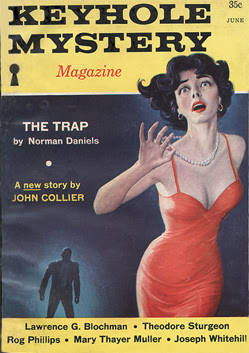 "When the rich old gentleman decided to cut his five shiftless relatives out of his will, he was simply asking to become . . . a case of homicide."

There's no mystery about whodunnit; the first sentence tells us that. Neither is there any mystery about why he dunnit, and we soon learn how he dunnit and who's going to take the blame; all that remains is to see when or if the authorities will ever tumble to the solution. They ultimately do, of course, as a triumphant police captain is able to tell the murderer, "You committed a perfect crime. You overlooked only one small thing. Something you could not have foreseen or you would have abandoned your plan to kill your uncle." Maybe it's true about greed being contagious . . .

Characters:
~ Fred Granview:
"The rich uncle who was going to change his will in the morning leaving all his money to charity, invited by the uncle for a Last Dinner during which he officially announced to all of them that in the morning they would be disinherited."
~ Reggie:
"I'm not going tonight. If I went I would strangle him with my two hands!"
~ Paul:
"Uncle Fred is doing this to deliberately bankrupt me, Henry. I have a note to meet the first of the month. If I can't meet it I'm through."
~ Audrey:
"If only he had waited! In another two years my voice would be ready for the Met!"
~ Margaret Hanson:
"You think I killed him, don't you?"
~ Theodore Hanson, Margaret's husband:

". . . had spent three years on his novel now and hoped to finish it in another year
or two . . ."
~ Dr. Ingersoll:
". . . the family doctor, arrived within five minutes of Uncle Fred's death. He had taken one look at the knife protruding upwards from Uncle Fred's chest and turned angrily to Henry. 'I thought you said he had a heart attack . . .'"
~ Henry:
"He realized it really was the last dinner with Uncle Fred. He had loved Uncle Fred as a father. In a sense Uncle Fred had created him."
~ Captain Bonner:
". . . was the real enemy. He had sensed it from the first moment he saw the man."

Resources:
- The Interweb has loads of information about Rog Phillips: Wikipedia (HERE), the SFE (HERE), the Fancyclopedia (HERE), and the bibliographies at the ISFDb (HERE) and eFanzines.com (HERE), the latter listing more than just SFF.
- The Man from Mars (or at least the guy who claims he's from there) says at one point, "Suppose everyone on Earth believed something to be true. That would of course make
it the truth." But would it? See the Wikipedia article "Argumentum ad populum" (HERE)
for a discussion.
- The notion that there could be abundant water on Mars becomes a plot point in our story; see Wikipedia (HERE) for the latest about that. 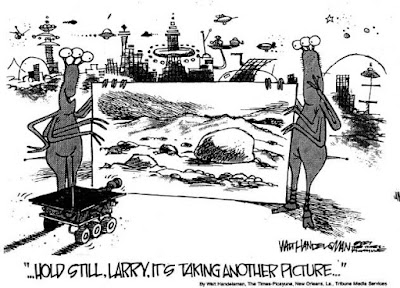