"His Leg Buckled and He Stood There on the Other One, Like a Chicken Does on a Cold Frosty Morning, and Just Stared at Me"

". . . already blood was showing on the polished stage floor."

STORIES WITH A show business background offer an extra something to the reader, and stories with a crime element offer even more. Our author, being one of the renowned "Black Mask boys," doesn't shy away from violence, but it's not nettlesome enough to overpower
the plot, which is a serviceable mystery, a shooting in front of hundreds of witnesses . . . 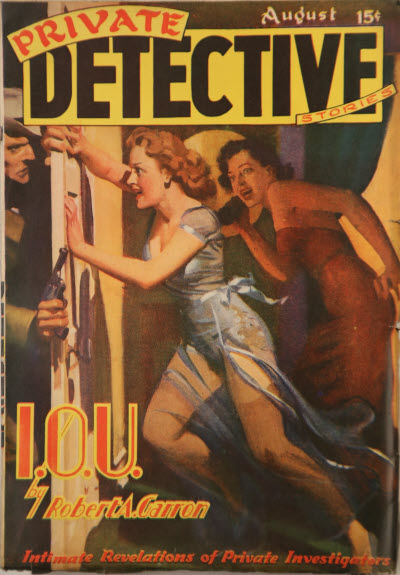 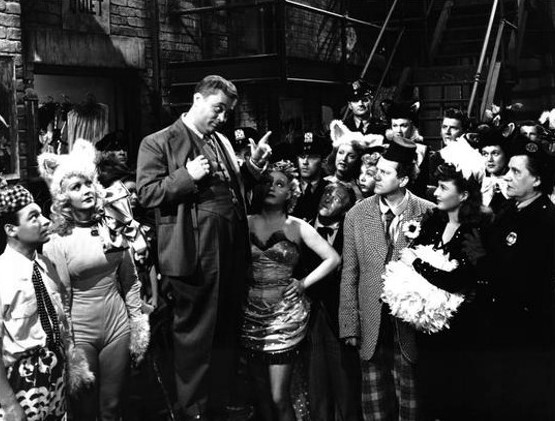 "Rawlin had been on the stage once, but he’d given up all that to become a private detective. In his acting days, women had been his chief weakness; and right now, the murder that confronted him was causing him no more trouble than the girls in the chorus!"

Being hired to guard expensive jewelry depending from a gorgeous showgirl's neck would seem to be the ideal assignment for a gumshoe who can't get enough of women, but things rapidly go south when somebody decides to take a shot at his beautiful client . . .

Characters:
~ Teddy Rawlin, the narrator, ham actor with a new profession:
"I’m a private investigator. I played a part like that in that show that folded over at the Grand, and all the guy had to do was walk around and look wise and every now and then say ‘this is a difficult case to solve.’ So I got myself a job with the Arnold Investigation Service. I eat steady now, which is more than I ever did in show business."
~ Leo Marks, stage manager:
"He just stared at me. I slapped his face hard, first one side and then the other, and the dopey look went out of his eyes and he shook himself a little. He shoved a button on the board . . ."
~ Lois McAvoy, statuesque songbird:
"She laughed at me in the mirror—and I started wishing the show wouldn’t be on in fifteen minutes or less. She had that kind of eyes and laugh."
~ Mary Mars, "a cat," observes Rawlin, "if ever one meowed":
"Mary Mars was a demure looking little wench that wasn’t much bigger than a drink of water—and who was hell on wheels."
~ Harry Brice, a fallen angel:
"If it wasn’t that he’s got more dollars than Mr. Carter’s got pills, they’d have him in jail for chasing kids. He’s a louse! He’s a rat! He’s been nothing but trouble for me and this show since he angeled it."
~ Mitzi Mareaux, in the wrong place at the wrong time:
". . . her real name was Mabel Welch and she was born over in Brooklyn. She was running around with a guy named William Morris—we’ve got him downstairs right now, working on him."
~ The doctor:
". . . a fussy little bird with a Vandyke and a medical bag came bustling through the crowd, shoving them every which way."
~ Joe Ellers, police detective:
"If we’re wrong. How in hell can we be wrong?"
~ William Morris, not a nice guy:
"He beat the girl up, only last week—he’s crazy jealous about her and has threatened her plenty of times. Everybody in the show will testify to that."
~ Carlotta, much put upon:
"She smacked her in the face a couple of times more, for good measure, and looked up at me . . ."

- One character unkindly remarks, "Half the time I think I’m working in Jumbo," a reference
to (THIS). A "chesterfield" doesn't refer to a cigarette but something comfortable to sit on (HERE).
- The setting and plot of our story remind us of a movie, Lady of Burlesque (1943) with Barbara Stanwyck (HERE and HERE). 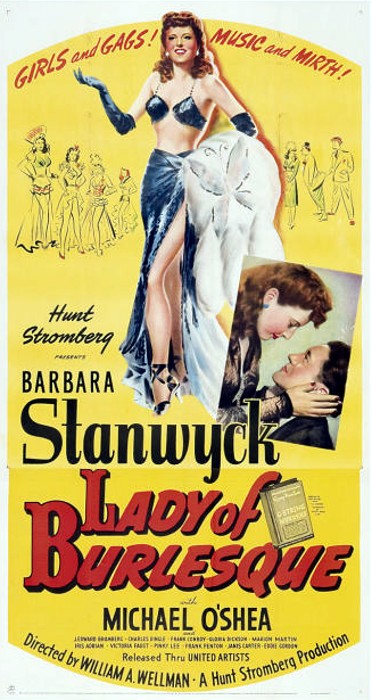