"Everything Considered, It Was a Remunerative As Well As Instructive Investment" 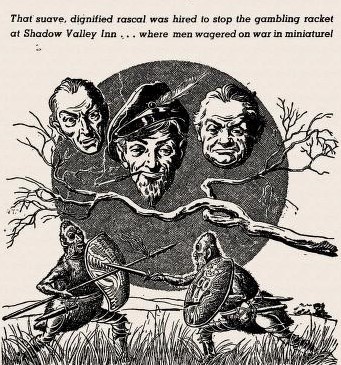 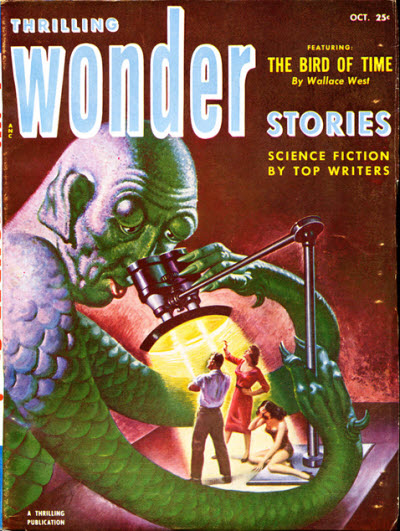 "Financial depletion is as good a weapon as any."

As usual, Magnus Ridolph's bank account is depleted, so when he's offered a chance to shut down a couple of war profiteers Ridolph sees the prospect of "a certain measure of subsidi-
ary profits"—not to mention the personal satisfaction of putting these sleazoids out of busi-
ness, because it just so happens they're the selfsame slimeballs who swindled him in a previous deal . . .

Major characters:
~ Martha Chickering:
"'Are you acquainted with the world'—she spoke it as if it were a social disease—'Kokod?'"
~ Magnus Ridolph:
"Your problem assumes form."
~ Bruce Holpers and Julius See:
". . . have ingeniously made use of the incessant wars as a means of diverting their guests. A sheet quotes odds on each day's battle—a pastime which arouses enthusiasm among sporting visitors."
~ Everley Clark:
"Do you think I enjoy seeing these little creatures tearing each other apart?"
~ Mr. Pilby, Mrs. Chaim, and Mrs. Borgage, Shadow Valley Inn guests:
"An old man with a nose like a raspberry,""a heavy woman scented with musk," and "a woman with the small head and robust contour of a peacock."
~ The hangarman:
"I tell you that tube's good as gold."
~ Captain Bussey:
"What in God's name happened to you?"
~ The Kokod Warriors:
. . . remind us vaguely of a planetary culture from a badly mismanaged motion picture franchise. (Wikipedia HERE). 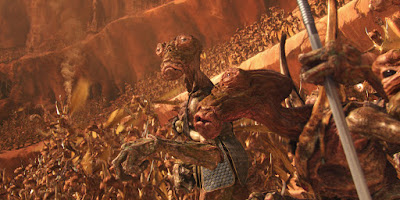 Resource:
- "The sun, Pi Sagittarius": Our author gets the Latin genitive case wrong. "Pi Sagittarii (π Sagittarii, abbreviated Pi Sgr, π Sgr) is a triple star system in the zodiac constellation of Sagittarius. It has an apparent visual magnitude of +2.89, bright enough to be readily seen with the naked eye. Based upon parallax measurements, it is roughly 510 light-years (160 parsecs) from the Sun." (Wikipedia HERE).

~ ~ ~
WE'VE EARNESTLY SEARCHED the Interblab for the tenth Magnus Ridolph novelette, "Coup de Grace" (a.k.a. "Worlds of Origin"; reprints page HERE), which first appeared in Super-Science Fiction, February 1958, but haven't had any success locating it. (That is, unless you can read Polish; see HERE). 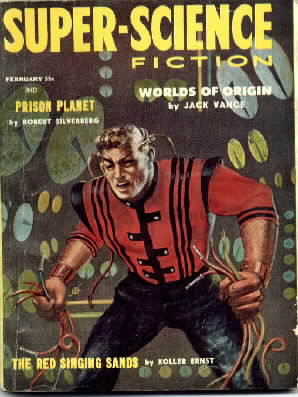 If you are interested, we regret that you'll have to pay for the privilege, either in paperback (Spatterlight Press edition, 2017; HERE) or in a Kindle e-book collection (Spatterlight Press, 2012; HERE) at Amazon.com; or the paperback (HERE) or NOOK e-book (HERE) at Barnes & Noble. "Worlds of Origin" was reprinted in Tales from Super-Science Fiction (2011; HERE) and elsewhere. 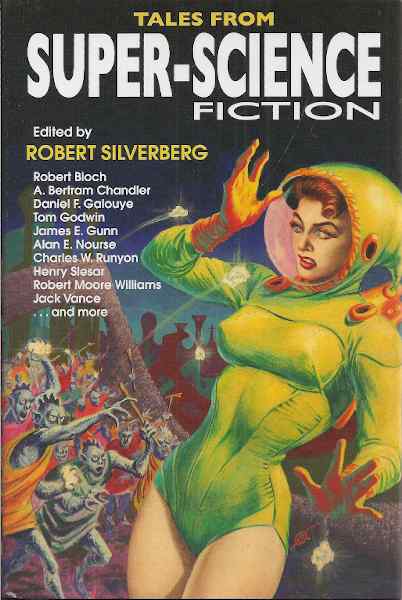