"I Love to Follow a Detective When He Uses His Brains"

THE BASIC PREMISE of having two detectives, one a professional and the other an amateur, competing with each other to solve crimes opens wide vistas for plotting to a
clever writer, as it clearly did to today's author, a man whose name you aren't likely to
forget soon. Here, two years after they first met in a novel, are their initial adventures
in the short story form: 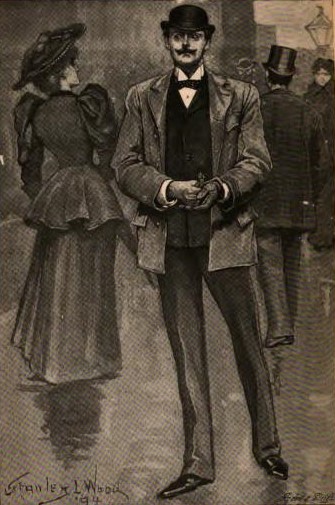 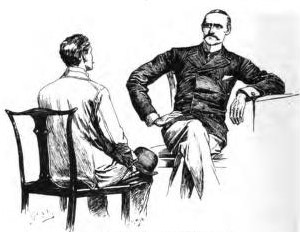 "As I am evidently a full-grown man, I can certainly claim that I have a past history, but to me that past is entirely blank. I awoke this morning in this condition, yet apparently in possession of all my faculties, so much so, that I at once saw the advisability of consulting a first-class detective, and, upon inquiry, I was directed to you."

Detective Barnes's detectival skills are tested when a man claiming to be an amnesiac comes to him for help. Little things, as always, contribute to the solution: a briefly-glimpsed watch and badge, small indentations on the sole of a shoe, initials on a handkerchief, and a regis-tration number for a bicycle. 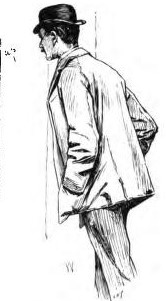 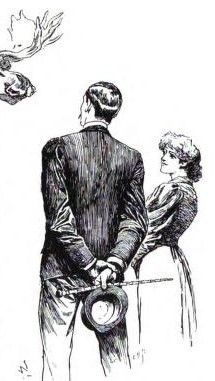 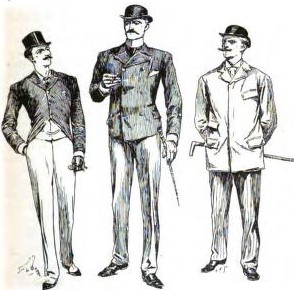 ~ ~ ~
"Criminals who disdain aliases have brains, and use them." 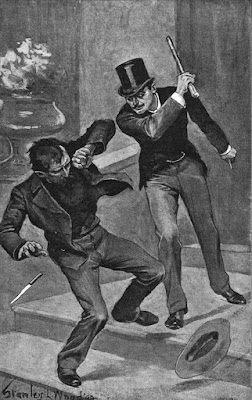 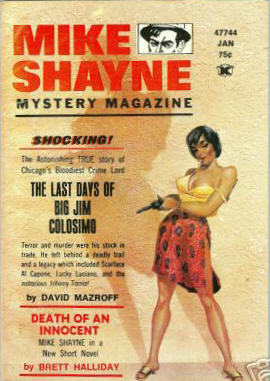 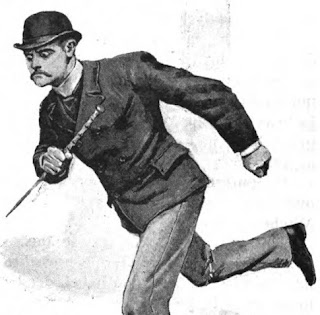 "ROBERT LEROY MITCHEL DROWNED! His Body Found Floating in the East River. A DAGGER IN HIS BACK. Indicates Murder."

Much like it was with Mark Twain, the report of the amateur sleuth's demise isn't just exaggerated but also a trifle premature, as Detective Barnes will soon learn . . . 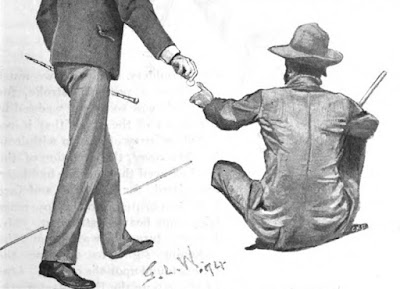 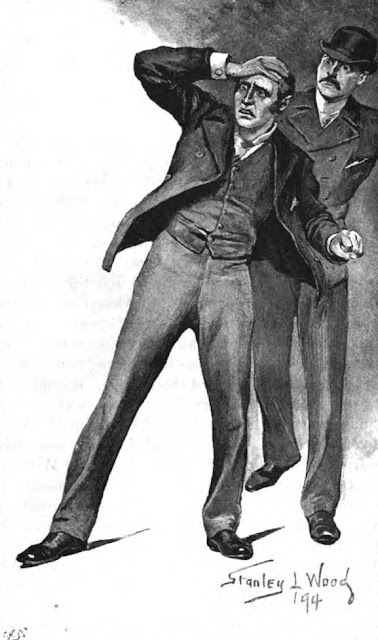 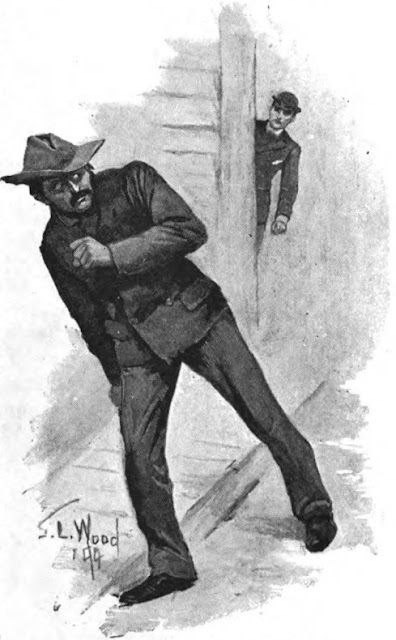 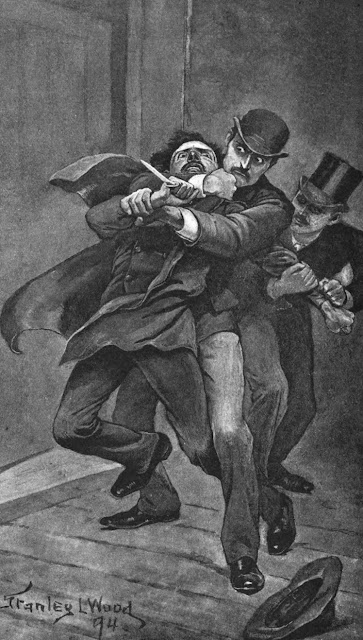 Resources:
- Despite the impression his name might give you, Benjamin A. Rodrigues Ottolengui was from South Carolina, a dentist by profession, and a thriller writer by avocation. Like Conan Doyle, he probably dabbled in fiction while waiting for patients; see Wikipedia (HERE), the GAD (HERE), and Douglas Greene's brief background article (farther down this page) for more biographical information. The SFE (HERE) and the ISFDb (HERE) have data on his few SFFnal works.
- Amateur sleuth Mitchel and professional detective Barnes first meet on a train in the novel, An Artist in Crime (1892; online HERE), just after a robbery has occurred and a search is on for the thief:

"At the name Mitchel, Mr. Barnes was a trifle startled. It was the same as that
which had been given by the woman who had been robbed. At this point, Mr. Mitchel, a man of forty-five, with a classic face, spoke:

"'Thanks, Arthur, I can take care of myself.'

"The conductor hesitated a moment, and then addressed Mr. Mitchel:
"'I regret very much the necessity which compels me to ask you to allow your-self to be searched, but it is my duty.'
"'My dear sir, I understand perfectly that it is your duty and have no personal
feelings against you. Nevertheless, I distinctly refuse.'

"'You refuse?' The words came from the other three men together. It is diffi-cult to tell which was the most surprised.

"'That amounts to a tacit acknowledgment of guilt, since every other man has been searched.'

"Mr. Mitchel's reply to this was even more of a surprise than what he had said before.

"'That alters the case. If every one else has submitted, so will I.' Without more ado he divested himself of his clothing. Nothing was found. The satchels of both men were brought, but the search was fruitless. The conductor glanced at the detective [Barnes] helplessly, but that gentleman was looking out of the window. One who knew Mr. Barnes could have told that he was fearfully angry, for he was biting the end of his moustache."

- Carolyn Wells immortalized our author in her poem, "A Ballade of Detection" (HERE), one stanza of which reads as follows:

To my mind nothing can exceed
The tales of Edgar Allan Poe;
Of Anna Katharine Green I’ve need,
Du Boisgobey, Gaboriau;
I’ve Conan Doyle’s works all a-row
And Ottolengui and the rest;
How other books seem tame and slow!
I like Detective Stories best.

- In her The Technique of the Mystery Story (1913; online HERE), Carolyn Wells offers an oblique rebuke to Ottolengui for employing what was an already overused mystery trope
a century ago:

A trite and greatly worn device is the watch that stopped presumably when the crime was committed. Here is a typical use of this incident quoted from R. Ottolengui's "The Crime of the Century":

"I found Mr. Mora's watch under the bed, where it must have been knocked from the dressing-table. The fall had caused it to stop, and the hands indicated seven minutes of two, agreeing with the time during which the watchman testifies that young Mora was at home."
"Yes," said Mr. Mitchel, "but do not go too fast. The watch may have run down. It is uncommon for a good watch to stop merely because it falls to the floor."
"Both of your points are good, in theory," replied the detective. "But neither applies in this instance. If a watch runs down, it cannot be started again without winding. By merely shaking this one I set it going, and to make assurance doubly sure, I let it run for an hour, when it was still keeping time. Next, though it be true that most watches would not be so easily stopped, this one, for some reason, is very sensitive to a blow. I tried the experiment of pushing it from the table to the floor, and at every attempt I found that it would cease its movement."

This idea of a stopped watch is so obvious that it led authors at once to the idea of purposely stopping a watch with the intent of leading the detective and the reader astray. In fact, this was done as long ago as in Gaboriau's "Crime of Orcival," where Lecoq, finding a clock which has been overturned in the strug-gle between the victim and his assassin, purposely turns the hands some four hours backward. This device has been used so often that the astute reader now disregards the evidence of the stopped watch in fiction.

Of course, Wells's remarks didn't discourage Agatha Christie from using the stopped watch as either a clue or, more often, a red herring (e.g., "At the Crossroads"; Murder on the Orient Express; The Clocks). And TV writers have used it ad nauseum: 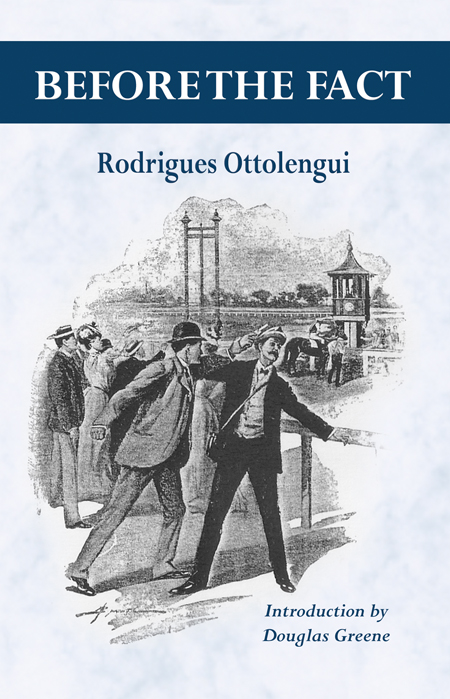 - The Battered Silicon Dispatch Box has collected the final six Mitchel/Barnes stories in Before the Fact (2011; HERE). In his introduction Douglas Greene discusses Ottolengui's unorthodox approach to mystery fiction:

"In 1893, Ottolengui added to has manifold activities the writing of a detective novel, An Artist in Crime, featuring two—sometimes cooperating, sometimes competing—sleuths, Jack Barnes (a professional private detective) and Robert Leroy Mitchel (a wealthy amateur). Why Ottolengui turned toward fiction is not known . . ."
"[In his first novels] Ottolengui combined Holmesian-style deductions with drugs, hypnosis, glandular experiments and a lost Aztec temple under New York City."
"In 1895, Ottolengui began writing a series of short stories about Barnes and Mitchel. At least four of them were published in Jerome K. Jerome’s London magazine, The Idler, and another appeared in the US magazine The Black Cat. They were collected in the 1898 volume Final Proof — and that book seemed to conclude the cases of Mitchel and Barnes . . . A recent discovery, however, has shown that Ottolengui did not desert the detection field in 1898. In 1901, Ainslee’s Magazine published six additional stories under the series title 'Before the Fact,' based on Mitchel’s claim that he could detect crimes before they took place. (Ottolengui, nevertheless, did not consistently use this conceit throughout the six stories.)" 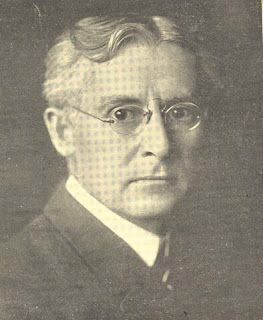