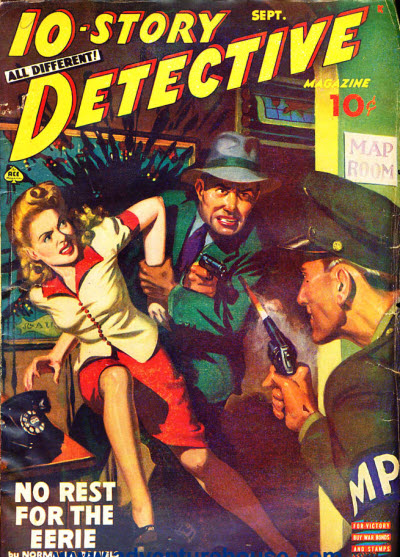 "Steve Abbott didn't believe in ghosts. He was leery when the engineer on Number 74 claimed to have run over a ghost on the track. But when Abbott went out to search for a mangled body, he himself was railroaded into a séance with Satan."

It's enough to make a believer out of just about anybody:

"Steve drew his gun and noticed that his hand shook badly. The ghost stood there, daring him to come closer. There was a certain wavering quality to the spectre. Then Steve really got a shock. . . ."

Characters:
~ Midford:
"It was his friend, dead for five years—killed close by in an accident. Midford—whom he had known so well and could never mistake. Midford seemed huge, towering, and he stayed right in the middle of the tracks."
~ Joe Mead:
". . . got under way in quick time, but he kept shaking his head from side to side. He couldn’t understand it. The man had been there, right in the middle of the tracks and yet there’d been no corpse, no blood—nothing."
~ The fireman:
"Pop was talking funny just before it happened. Said he had a premonition or something. Maybe the poor guy has gone crazy."
~ The conductor:
"All right, Joe, but the body didn’t just vanish. Even if it did, there’d be blood stains. This baby you pilot doesn’t tickle people she hits."
~ The signalman:
"I didn’t see anybody, and I watched you roll through here. It’s the only excitement I ever get in this forsaken spot."
~ Steve Abbott:
". . . a railroad detective, didn’t know too much about homicide. He was no city cop with laboratories at his command, or hundreds of men to help check details. He was virtually alone." 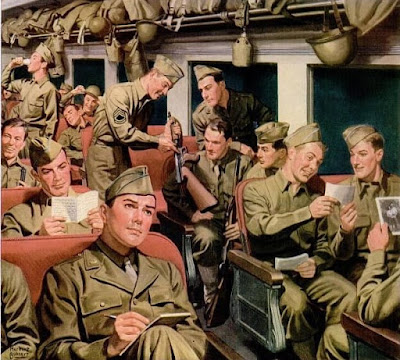 - We have a more comprehensive posting about uberpulpster Norman Daniels (HERE).

We highlighted nine railway-related "mysteries" in 2018 (for our purposes, the term "railway-related" means that in some fashion trains were involved, even if only marginally, in the plot):