"Obviously, One of You Gentlemen Is a Murderer"

"The Nifty Murder Case."
By Richard Mueller (born 1920).
First appearance: The Magazine of Fantasy and Science Fiction, May 1985. 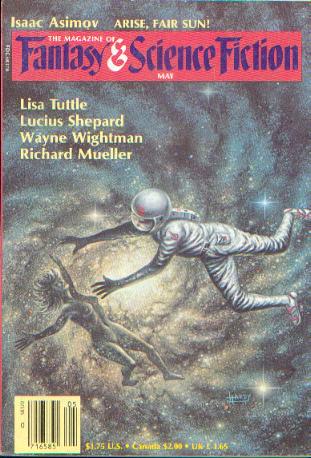 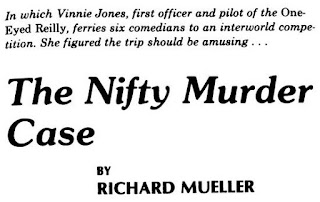 "A homeotropic dart embedded in the base of the couch. It was lodged in his spine."

You'd think the trip to The Fourteenth Cycle Interworld Comedy Competition with a shipload of comedians would be a million laughs; the soon-to-be-victim probably thought so, until . . .

Characters:
~ Billy Nifty:
"E'ryone loves Billy Nifty, you'll see."
~ Skipper:
"Vinnie, we've got a cessation of life-form reading in the passenger section."
~ Vinnie Jones, First Officer and Second Pilot of the One-Eyed Reilly:
"Murder is a serious business, and under the regulations of the Merchant Service, as a ship's officer, I'm required to investigate."
~ Dan Cordon, Pierre Martel, Merle Shoals, Baker Steeves, and Rand ee Duckworth:
One of these guys—or maybe more, but what do I know?—has big plans for Billy Nifty:
an eternal engagement in that Great Comedy Club in the Sky.
~ Scooter:
"I don't understand. Is that supposed to be funny?"