AFTER YOU'VE spent time solving locked-room problems with John Dickson Carr or his alter ego Carter Dickson, almost all other impossible crimes pale in comparison. Like a drug taken too often or too quickly, imbibing the fiendishly clever works of our favorite detective fiction author (his name, as you may have noticed, is embedded in our weblog's URL) could strongly influence your perceptions; so, when a Golden Age pulpster not named Carr or Dickson attempts an impossible crime in a sealed room and you've been constantly communing with JDC, you might judge the story rather stringently, perhaps a bit too rigorously. Bear that in mind as you read . . . 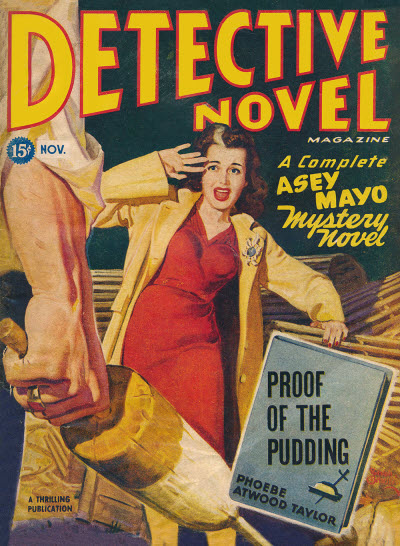 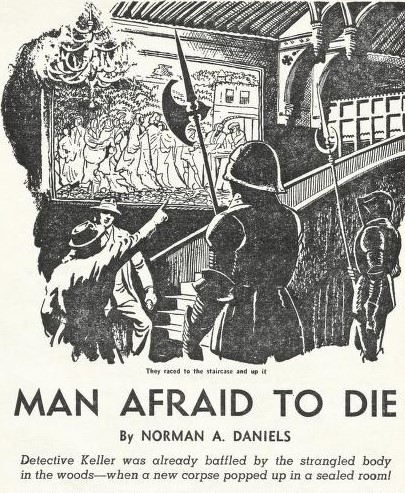 "The time is almost at hand. Get ready to die."

. . . and when death does come for the victim it's quick, according to the doctor, because after being stabbed in the heart "he didn't breathe more than twice"; but for the investigating detective the situation goes from zero to impossible with dizzying speed: "There wasn't a place for anyone to hide and one of us was close by the only door all the time." There is a bright spot in the case for him, however, a faint glimmer of light, the dawning of a revelation, that this crime is inextricably related to another, unresolved murder, and to solve one would mean solving the other . . .

Major characters:
~ David Stearns:
"The man was dead. There was no doubt about that, but Keller worked furiously until the door opened. He dropped to one knee beside the man and felt for a pulse. There was none. The body wasn't just warm, with the normal heat of life. It was hot."
~ Dr. Blaney:
"It's murder all right. The knife in the chest could be suicide, but not the wounds in the back. There are six of them. Looks to me as if the killer slipped up on Stearns, stabbed him half a dozen times and sent him sprawling to the floor. Then he delivered that wound through the heart."
~ Detective Jim Keller:
"I happen to know you carry a gun. I felt it when I brushed against you. I carry one, too. Want to see who can draw the quickest . . .?"
~ Nick Parker:
". . . alone had an unbreakable alibi."
~ Paul McHale:
". . . might solve the whole fantastic problem . . ."
~ Richard Gray:
"Come to think of it, the voice that called me was so high-pitched, I couldn't say whose it was."
~ Dr. Bixby:
"Good gosh! Do you think I killed him?"

Comment: To his credit, our author spends more time examining motives and the mechanics of the impossible crime than usual; many pulpsters (in fact, many mystery authors) wouldn't even bother.

Resources:
- The latest story featured on ONTOS by ultra-uberpulpster Norman A. Daniels that we're pretty sure he actually wrote is "Satan Turns the Timetables" (HERE), not a locked-room problem.