"The Clues I Hope To Find Will Probably Be Invisible!" 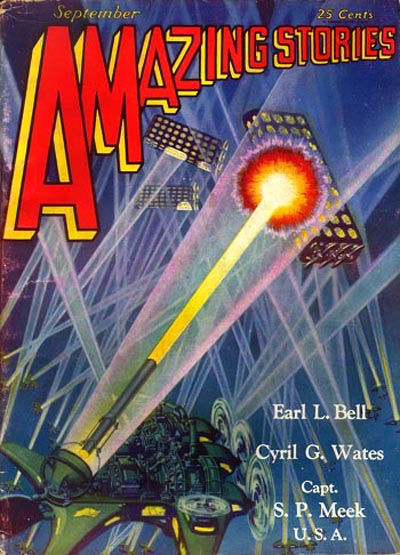 ". . . this time we’re going to turn detectives and go on a hunt for desperate criminals."

Auric Goldfinger (the book villain) hoped to make all the gold in Fort Knox disappear by loading up trucks and hauling it away, but as our story shows there's more than one way
to make tons of bullion vanish. Fifty million dollars in gold is a tidy sum, even allowing for inflation, and when it goes missing under impossible circumstances it's enough to pique
the interest of brilliant polymath Hilary Corwin, the Buckaroo Banzai of his day . . .

Characters:
~ Hilary Corwin:
"Having in mind the methods of Sherlock Holmes and other great detectives in the world
of fiction, I looked for my friend to produce a magnifying glass and begin a long hunt for fingerprints, footmarks and other clues, but I was doomed to disappointment."
~ Cogswell, U.S. Treasury:
". . . immediately started to give a long-winded account of the mysterious robbery, as he called it, but Corwin cut him short without ceremony."
~ Frank (the Watsonian narrator):
"Even a child could see that the whole story was a tissue of lies, very unskillfully designed to conceal the real facts. No doubt existed in my mind that the four guards were in collusion with the actual thieves. A duplicate key, a gang of men to carry the chests to a plane, hidden at a distance—why the whole plot was obvious!"
~ The sergeant:
"Well, sir, don’t blame me if it sounds crazy, but we saw the cases, only we couldn’t see them. They were tumbling all over each other, but they were standing perfectly still. They looked misty, kind of, and for a moment I could see the gold inside quite distinctly."
~ The engineer in charge:
"We turned on the power for a few minutes this morning and ran a thousand horse motor
in Paris successfully, but the main circuit breaker blew out after about three minutes."

Resources:
- "the tremendously rapid strides the new Central African republic had been making in the
last few years as the result of the extensive development of the radium mines there": A reference to Rhodesia (now known as Zimbabwe), which "was the de facto successor state
to the British colony of Southern Rhodesia, which had been self-governing since achieving responsible government in 1923." (Wikipedia HERE and HERE). As for the "radium mines there": "Radium is the heaviest known alkaline earth metal and is the only radioactive member of its group." Moreover, "Radium is highly radioactive and its immediate daughter, radon gas, is also radioactive. When ingested, 80% of the ingested radium leaves the body through the feces, while the other 20% goes into the bloodstream, mostly accumulating in
the bones. Exposure to radium, internal or external, can cause cancer and other disorders, because radium and radon emit alpha and gamma rays upon their decay, which kill and mutate cells." (Wikipedia HERE).
- "You certainly gave the sergeant a Roland for his Oliver": A reference to an epic poem.
"The Song of Roland (French: La Chanson de Roland) is an epic poem (chanson de geste) based on the Battle of Roncevaux Pass in 778, during the reign of Charlemagne. It is the oldest surviving major work of French literature and exists in various manuscript versions, which testify to its enormous and enduring popularity in the 12th to 14th centuries." Roland is "the hero of the Song; nephew of Charlemagne; leads the rear guard of the French forces; bursts his temples by blowing his olifant-horn, wounds from which he eventually dies facing the enemy's land," while Oliver is "Roland's friend; mortally wounded by Margarice. He represents wisdom." (Wikipedia HERE). 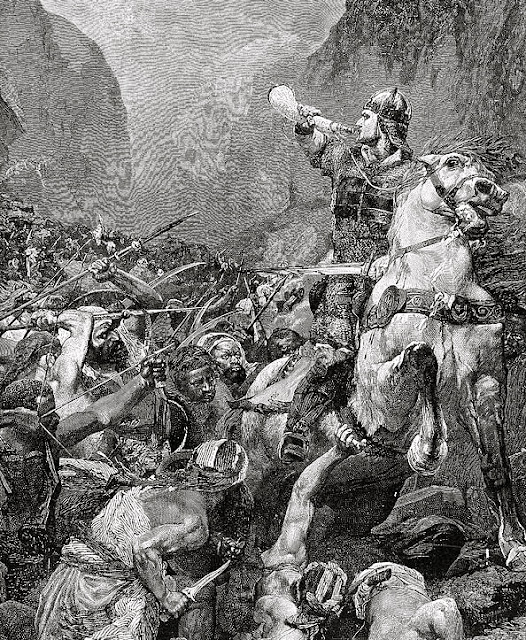 - "Surely you have heard that the Marconi interests have at last perfected Beam Power Trans-mission. In three months’ time passenger planes will draw their power from the ether. In fact the first Beam plane will cross the Atlantic from here to-morrow.": We don't know how much Marconi was into the idea, but it certainly captured Nikola Tesla's interest. (Wikipedia HERE and HERE).
- "It is possible to confine the waves to a narrow path by utilizing the principle of interference or heterodyning, as it is called.": Whether you knew it or not, you make use of it all the time. "A major application of the heterodyne process is in the superheterodyne radio receiver circuit, which is used in virtually all modern radio receivers." The process sounds simple:  "Heterodyning is a signal processing technique invented by Canadian inventor-engineer Reginald Fessenden [in 1901] that creates new frequencies by combining or mixing two frequencies. Heterodyning is used to shift one frequency range into another, new one,
and is also involved in the processes of modulation and demodulation." (Wikipedia HERE).

- "It was simply a Kelvin Balance.": It goes by other names, as well. "The ampere balance (also current balance or Kelvin balance) is an electromechanical apparatus used for the precise measurement of the SI unit of electric current, the ampere. It was invented by
William Thomson, 1st Baron Kelvin." (Wikipedia HERE).
- "The Fourth Dimension is all very well as a subject for imaginative fiction, but you can hardly expect to convince me or anyone else that such a thing really exists.": For a while,
it was even the subject of casual dinner conversation. "A four-dimensional space or 4D
space is a mathematical extension of the concept of three-dimensional or 3D space.
Three-dimensional space is the simplest possible abstraction of the observation that
one only needs three numbers, called dimensions, to describe the sizes or locations of objects in the everyday world." (Wikipedia HERE and HERE). A few years later Robert Heinlein, who very probably read today's story at some point, had some fun with the
fourth dimension (SPOILERS: Wikipedia HERE; Archive.org HERE). 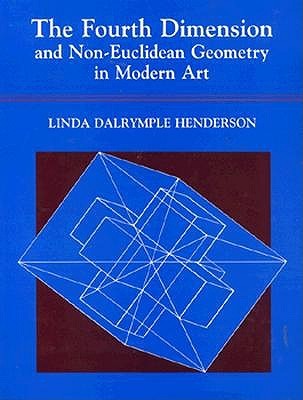 - "magnetic lines of force are actually the result of a strain in the ether": Another victim of Professor Einstein. "In physics, aether theories (also known as ether theories) propose
the existence of a medium, a space-filling substance or field, thought to be necessary as
a transmission medium for the propagation of electromagnetic or gravitational forces.
Since the development of special relativity, theories using a substantial aether fell out of
use in modern physics, and are now joined by more abstract models." (Wikipedia HERE). 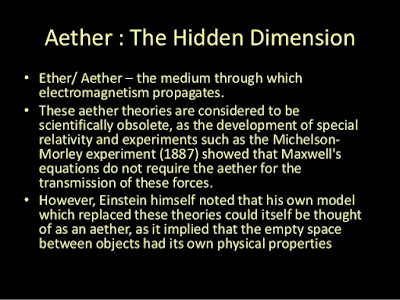 - "they start the Power Beam gradually by means of rheostats": Another device that has changed names over time. "The most common way to vary the resistance in a circuit is
to use a rheostat. The word rheostat was coined about 1845 by Sir Charles Wheatstone,
from the Greek ῥέος rheos meaning 'stream', and -στάτης -states (from ἱστάναι histanai,
'to set, to cause to stand') meaning 'setter, regulating device', which is a two-terminal
variable resistor. The term 'rheostat' is becoming obsolete, with the general term
'potentiometer' replacing it." (Wikipedia HERE).