AT ONE TIME the most popular writer appearing in Weird Tales according to reader voting was Seabury Quinn (1889-1969; Wikipedia HERE), with his most memorable series characters being supernatural sleuth Jules de Grandin ("Le Sherlock Holmes du Surnaturel") and his Watson, Dr. Trowbridge (Wikipedia HERE and the ISFDb HERE). For those of you who didn't know all this, we mention it as a necessary preface to today's story, in which David Wright O'Brien has some fun with Quinn's occult detective, this being . . . 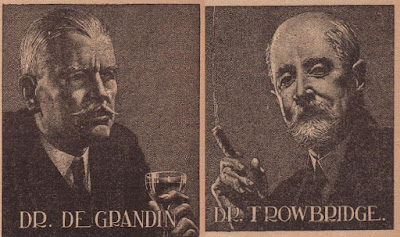 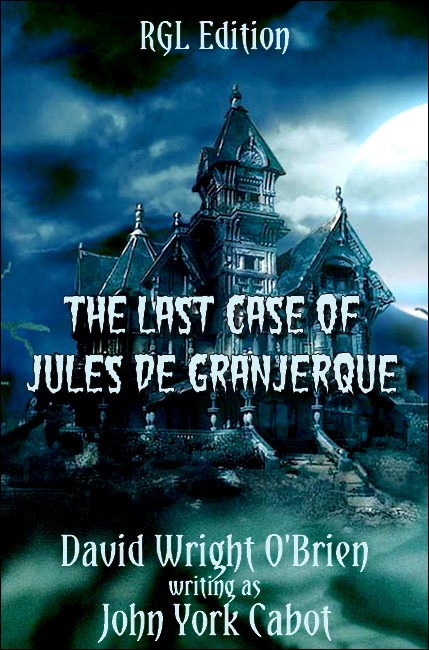 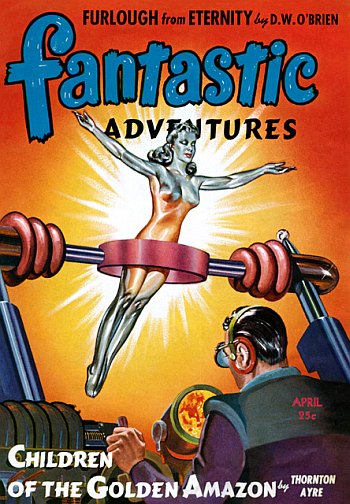 "Of a certainty, there is no such thing as the haunted house."

Our narrator, poor man, will have to endure what many "Watsons" have been forced to suffer over the centuries:

"I nodded, glumly aware that my brilliant little colleague was going to con-
duct this super-supernatural investigation in much the same fashion as he had on all other occasions on which I'd been privileged to accompany him. I would have to wait for the complete story before he gave me any of it other than what became evident as he proceeded with the case."

Characters:
~ Jules de Granjerque:
"It is always thus when I, Jules de Granjerque, accept a case involving what other foolish mortals fear to be occultism. Always, I am able to prove their fears are stupid, groundless."
~ Dr. Throwbunk:

"My limousine was my pride and joy, a master automobile. My little friend de Granjerque drove with all the wild recklessness of a gaucho. The thought of his sitting behind the
wheel of that car—especially on a night such as this—was more than I could stand."
~ Silas Burton:
". . . they say it—the building—is haunted!"
~ The apparition:
"I was blinking at the ghost, terrified yet, but bewildered by de Granjerque's courageous challenge. It was a huge thing, I saw now, and it was sheeted, completely enshrouded in white, with two black holes for eyes."

Cultural References:
~ "in the manner of the Flying Dutchman piloting a ship through a storm": An enduring legend that popular culture won't turn loose of.

"The Flying Dutchman (Dutch: De Vliegende Hollander) is a legendary ghost ship that can never make port and is doomed to sail the oceans forever. If hailed by another ship, the crew of the Flying Dutchman will try to send messages to land, or to people long dead. In ocean lore, the sight of this phantom ship is a portent of doom." (Wikipedia HERE). 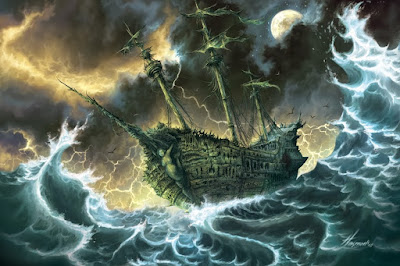 ~ "his Wembly-Vickers in his hand": We know Webly made revolvers and Vickers made machine guns; O'Brien seems to be alluding slantwise to Walter Mitty's mythical Webly-Vickers.

"Walter James Mitty is a fictional character in James Thurber's first short story 'The Secret Life of Walter Mitty,' first published in The New Yorker on March 18, 1939, and in book form in My World — and Welcome to It in 1942." (Wikipedia HERE). 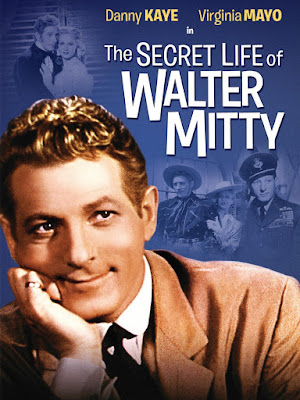