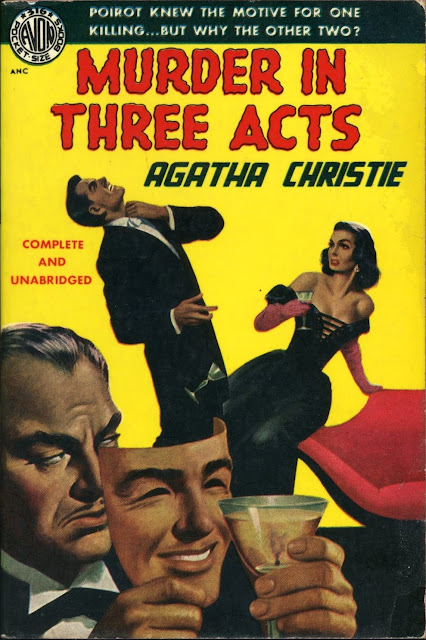 The following brief excerpts will refer to both the book at times and the TV show at others:

A Christie which feels more like an Anthony Berkeley, with its cast of socialites, intellectuals and theatricals, its opening murder at a cocktail party, and both the murderer's identity and his gambit. Throughout, Christie's writing is witty and sophisticated, and the characterisation of the leading roles is very good. Although Poirot is present when an inoffensive clergyman is poisoned at a cocktail party given by the actor Sir Charles Cartwright, he doesn't really begin to detect properly until page 117. The murderer's identity is quite surprising, although it's one Christie will use several times throughout the 1930s. His plan, though, is improbable and very risky. — Nick Fuller, GAD Wiki

Although a conceited elderly bachelor such as Poirot had limited scope for development, Christie abandoned the Holmesian ambience and turned her detective's traits cleverly to advantage. In Three Act Tragedy (1935; Murder in Three Acts), he acknowledged that speaking broken English was an enormous asset, which tempted suspects to under estimate him and thus let their guard slip. Christie was not afraid to poke fun at him, but in his "bourgeois" disapproval of murder he reflected her attitudes. — Martin Edwards ("Hercule Poirot")

This is a story of coincidences, quite a number of false trails, and one in which both Mr. Satterthwaite and Hercule Poirot play the matchmaker. Poirot is determined that the mystery will not defeat him. He is very aggrieved that he did not originally think [the first victim] was murdered. — Kerrie, MYSTERIES IN PARADISE (9 January 2010)

. . . I think the concept behind the book is marvellously cunning—especially in the way the first murder is explained—and as far as I know it is original to Christie. A clever mystery, turned into splendid Sunday evening viewing. — Martin Edwards, DO YOU WRITE UNDER YOUR OWN NAME? (4 January 2010)

The film has been unfairly assailed as being "too theatrical." Indeed, theatricality is a welcome component of the production. Kudos to director Ashley Pearce for making intelligent use of just about every visual technique known to film makers to keep things moving; the pacing is excellent and the performances—particu-lary by Kimberley Nixon, Martin Shaw, and David Suchet—are most effective. — Mike Tooney 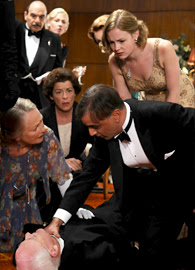