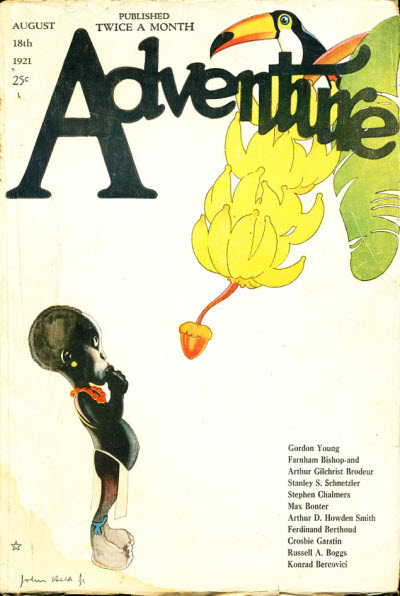 It really is a small world, isn't it, when you run afoul of somebody you ran afoul of twenty years ago . . .

Guys (and a doll):
~ The chief:
"Ire, strong and ill-controlled, blazed in his deep-set eyes."
~ Blackson:
"Quickly he left the unpretentious base headquarters where society's defensive brain-force was centralized and at bay before the increasingly vicious assaults of the underworld."
~ "New York Roddy":
"New York Roddy's laughing eyes held vision as subtly sure as a cat's and the fireman sensed with unerring accuracy the nature of the potential destruction concealed in that
gray overcoat pocket."
~ "That dame":
". . . made a cool thirty-five on that transaction on a fifteen principal. Don't they learn, eh? She ought to be in Wall Street. Pays to get robbed sometimes, eh? That's why ev'rybody
likes a gunman."

Typos: "collabotaors"; "New York Ruddy".
Resources:
- Our undercover detective, pretending to be a gob (the old term for an American sailor), is frequently referred to as a "fireman," which doesn't mean "firefighter" here: "Fireman or stoker is the job title for someone whose job is to tend the fire for the running of a steam engine. On steam locomotives the term fireman is usually used, while on steamships and stationary steam engines, such as those driving saw mills, the term is usually stoker . . ."
— Wikipedia, "Fireman (steam engine)"
- Remember that our story takes place shortly after Prohibition went into effect; see the History.com article (HERE).
- There's almost no information about our author to be found; FictionMags's thumbnail: "Sailor. Probably from New York."
~~~~~~~~~~~~~~~~~~~~~~~~~~~~~~~~~~~~~~~~~~~~~~~~~~~~~~~~~~~~~~~~~~~~~~~~~~~~
Posted by Mike Gray at 7:00 AM