"My Admiration Is Reserved for the Detective Who Detects, Whose Claim to Fame Is His Mind Rather Than His Way with a Girl or a Jury"

WHEN ONE THINKS of crime fiction authors the name of Kingsley Amis doesn't immediately spring to mind; SFF aficionados may remember him for his salubrious influence on science fiction and fantasy when the New Wave was cresting:

". . . we have noted an unfortunate tendency . . . to demand of [science fiction/fantasy] works . . . all the structures and depths and levels and characterizations and completenesses which, emerging from the English departments, have for so many decades now hung threateningly above ordinary fiction—without noticeably improving it. It would be a pity if
science fiction were to become yet another well-policed province of
today's or yesterday's literary ideologies.  . . .  The science-fiction
writer introduces interplay of character at his peril."
— Introduction to Spectrum V (1967), edited by Kingsley Amis and Robert Conquest

The very same could be said for detective fiction.

While he was lionized by the Literary Establishment for such mainstream efforts as Lucky Jim (1954; the one he's most remembered for in Academia) and condemned by the same people for his political views, he never lost interest in what he regarded as the minor genres, including SFF and crime fiction, producing such works as The Anti-Death League (1966), The Riverside Villas Murder (1973), and The Crime of the Century (1975), as well as his own idio-syncratic take on James Bond (Colonel Sun, 1968).

Amis was quite conversant with detective fiction, including the exploits of the Sage of Baker Street, and that brings us to the following story:

"The Darkwater Hall Mystery."
By Kingsley Amis (1922-95).
Collected in Collected Short Stories (1980).
Reprinted in The Big Book of Sherlock Holmes Stories (2015).
Filmed for TV (IMDb HERE).
Short story (18 pages).
Online at The Luminist League Archives (HERE; scroll down to page 226).
(Note: Be prepared for a very slow load—or no load at all.)
"Thus it was that events conspired to embroil me in what I must describe as a truly singular adventure."

This time a fatigued Sherlock Holmes is shunted off to the Musgrave estate for a rest cure and Dr. Watson must step up to solve a mystery that isn't a mystery and disport himself in
a most ungentlemanly fashion.

Comment: The "mystery" is negligible, by intention; the author could have practiced what he preached (see above), but character interaction gets the most emphasis, which is precisely
what this story is all about.
Typo: "would have stolen hat weapon" 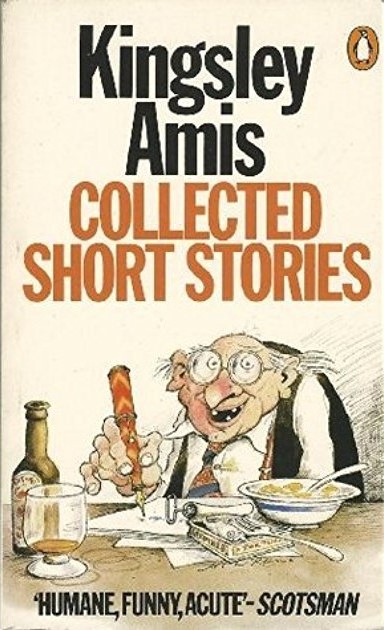 ~ ~ ~
AMIS ALWAYS evinced his own unorthodox views in his nonfictional writings, including the following piece that should be of interest to regular readers of this weblog:

It's pretty hard to shock anyone these days, and we're not going to assert that such is the case here; but it is, let's say, surprising that Amis, a life-long socialist by habit, should hold such conservative-sounding opinions about detective fiction. Rather than steal Amis's thunder, we'll content ourselves with an outline of his article (and remember, he's writing in 1966, when venerable old pros like John Dickson Carr, Edmund Crispin, and Agatha Christie were still alive and producing fiction):

- Nicolas Freeling (". . . one of the most promising arrivals on the post-war crime-fiction scene . . .") and Van der Valk (". . . very much a real policeman").
- Inspector Maigret ("None of those brilliant intuitions, those miraculous leaps in the dark, those questions about what seem to be insanely irrelevant matters, that are so firmly in the middle of the great detective tradition inaugurated by Poe's Auguste Dupin").
- Dashiell Hammett and Sam Spade; Raymond Chandler and Philip Marlowe; Mickey Spillane and Mike Hammer ("Spillane is the best of the three cited—an unpopular view,
which I would defend hotly").
- Erle Stanley Gardner and Perry Mason (". . . Mason has an impressive claim to being considered the most boring foe of criminality in our time . . .").
- Arthur Conan Doyle, Dr. Watson, and Sherlock Holmes ("The magnifying lens and the dozen red roses belong to different worlds").
- Edgar Allan Poe and Dupin ("Apart from his irritating mannerisims, all three of Dupin's cases are very shaky").
- Dorothy L. Sayers and Lord Peter Wimsey ("With few shining exceptions, the heirs of Sherlock Holmes are an undistinguished lot.  . . .  Here I should in fairness make it plain
that Wimsey is no more of a fag that Holmes is: he merely looks and sounds like one . . .").
- Agatha Christie; Hercule Poirot and Miss Marple ("I have never understood the fame of
the two Agatha Christie characters, both of whom seem straight out of stock—Poirot the excitable but shrewd little foreigner, Marple the innocent, helpless-looking old lady with the keen blue eyes").
- Ellery Queen ("Ellery of the silver-coloured eyes is seldom much more than an extension of the plot").
- Michael Innes and Sir John Appleby ("The Appleby method of detection is to sit back
and wait for the unconscious to come up with a solution, though the sitting back is purely
mental . . .").
- Edmund Crispin and Gervase Fen (". . . an eccentric after the fashion of Holmes or Wimsey, but funnier and in one sense grander than they, in that he seems to create
his own kind of adventure").
- "The three great successors of Sherlock Holmes": G. K. Chesterton's Father Brown
(". . . the good ideas are many and marvellous"); Rex Stout's Nero Wolfe and Archie
Goodwin ("The weakness of Stout's hugely readable stories is always the story.  . . .
I can seldom be bothered with the details of the investigation, which usually proceeds
by revelation and discovery rather than by actual deduction"); and John Dickson
Carr/Carter Dickson's Dr. Gideon Fell and Sir Henry Merrivale ("In Carr-cum-Dickson
it [the detective story] does [offer ingenuity raised to the point of genius], perhaps
two dozen times in all, and this author is a first-rate artist").

Resources:
- Like a lot of other writers, Sir Kingsley William Amis was done in by chronic overdoses of booze and babes; see Wikipedia (HERE) for details.
- Amis's involvement with SFF is chronicled (HERE; SFE) and (HERE; ISFDb).
- No surprise that Lucky Jim wound up on television as both TVMs and series (HERE). 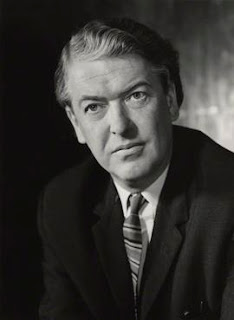