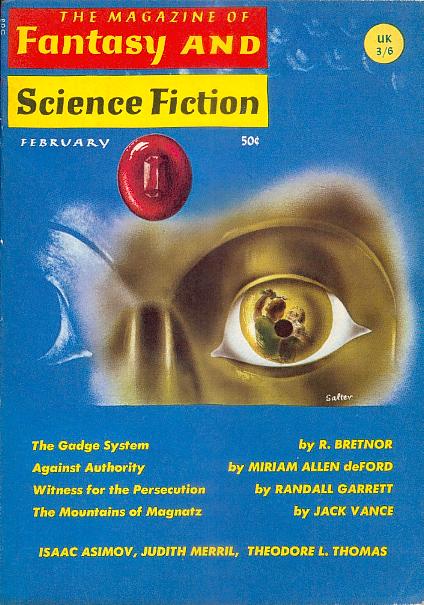 "Big holes were suddenly appearing in the wall near the door of my place, splattering plastite all over the place, filling the corridor with dust and smoke."

Major characters:
~ Walt Gayle (narrator):
"I don't mind collecting damage insurance, but I'd just as soon my life insurance stays in effect for a while. You saved my life twice."
~ Jeremiah:
"I'm sort of a troubleshooter, you might say."
~ Mirom Flood:
"Maybe I'm a child, Walt. Maybe I'm a romantic. But I still say he's from the Double World. He's got mental powers that - that you and I can never understand."

It's unsettling to think that Jeremiah's summary of the theory of how government operates ("a pattern as old as Mankind") might be true:

"A revolution is dangerous. People get killed. So you take the majority and split it into two parts. It's a process that works well in a regimented, but moribund and self-satisfied society. You call the two parts of the majority group Tweedledum and Tweedledee. Then you set it up so that Tweedledum is in power. When the minority becomes fed up to the ears with Tweedledum, you have a revolution - either with guns or with ballots - and then Tweedledee takes over. The people are lulled into thinking that there has been a change. Then, when people are sick and tired of Tweedledee, there is another revolu-tion and Tweedledum comes back into power. Again the people are lulled. Or gulled, if you prefer."

So, in the last election, did you vote for Tweedledum or Tweedledee?

"In science fiction, artificial gravity (or cancellation of gravity) or 'para-gravity' is sometimes present in spacecraft that are neither rotating nor accelerating. At present, there is no confirmed technique that can simulate gravity other than actual mass or acceleration."
—"Antigravity," Wikipedia (HERE)

- Barnesworld evidently orbits a binary star system partially outside the plane of the Milky Way galaxy:

"I stood at the window of my small bachelor's apartment and looked at the suns, seeing them without noticing them. The primary, One, was simply being its normal yellow self, while the distant Two was a bright, hard, diamond pin-point of blue-white. During the years when Two is in the night sky, there is no real night, because Two illuminates the planet beautifully. But now, when Two was passing around the other side of One, the nights were black. The Galactic Lens is clear from here, but we have no moon."