"Holmes, the English Consulting Detective, and Lupin, the French Gentleman-Burglar, Have More in Common Than Might Be Thought" 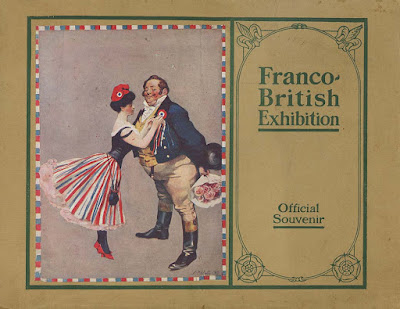 JUST PRIOR TO the great Franco-British Exhibition of 1908 held to celebrate the Entente Cordiale signed in 1904 by the United Kingdom and France (see "Resources," below), the kind of mania for Sherlock Holmes stories that had gripped English readers in the previous decade now, upon their translation, seized French readers, naturally creating an appetite for more, more, more. Not to be outdone, an opportunistic journalist-publisher named Jean Lafitte decided to launch a Gallic version of the Great Detective:

"Given [Sherlock] Holmes’ huge popularity in both France and Britain at the time of the Exhibition and the hope in France that [Arsène] Lupin would emulate Holmes, a brief examination of the Holmes phenomenon at the end
of the nineteenth and beginning of the twentieth century is called for."

"Leblanc’s sketchy character outlines make it clear that he was not attempt-ing to write a Holmes pastiche as others had done both in France and in England. The purpose of introducing Holmes into the Lupin tales was to place Lupin on the same level as Holmes and stage a ‘battle of the giants’. But Leblanc does not take Holmes’s reputation as a genius for granted: he spells
it out."

Was this, then, an opportunity for the French to upstage their cross-Channel rivals when Leblanc pitted Lupin against the Sage of Baker Street?

According to our author, however, we shouldn't make too much of it:

"But it would be wrong to see the Lupin stories featuring Holmes as anti-English polemics. The tone is playful and humorous and Leblanc enjoys exploiting the fact that, as we have seen, it was widely believed that
Holmes was a real person." 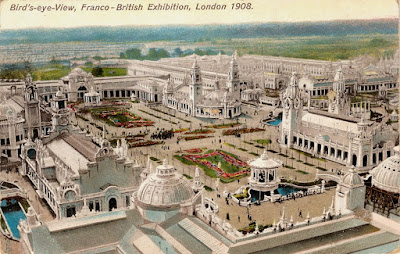 Leblanc couldn't resist references to Holmes in his stories, although the compliment was never returned:

"Thus, by including Sholmès/Holmes in his Lupin tales, Leblanc was following a well established tradition within the detective/crime fiction
genre, namely cross-referencing in order to increase the status of one’s
own hero. There is no reference to Lupin in Conan Doyle’s Holmes stories,
but it is clear that Conan Doyle was aware of Leblanc’s creation."

. . . almost to the point of a lawsuit, be it noted. Nevertheless, the two characters weren't exactly alike:

"At first glance we are struck by the differences between Conan Doyle’s Holmes and Leblanc’s Lupin. The majority of the cases undertaken by Holmes, the gallant, asexual, rational yet bohemian aesthete, take place in England, mostly in London or within easy reach of the capital, and are set between
1886 and 1904. [With his first adventure taking place in 1905] Lupin, on the other hand, is a dashing, flamboyant, raffish Don Juan French bandit-hero of the Belle Epoque. Most of Holmes and Watson’s adventures are nostalgic returns to the gas-lit Victorian world of the hansom cab and the steam train
. . . Lupin’s world is altogether faster moving and imbued with technological progress. For example, the very first tale is set on a transatlantic liner, on the first page there is a reference to the wireless telegraph and a Kodak camera is central to the plot . . ."

. . . but they did have a couple of character traits in common:

"What links Holmes and Lupin is that they both operate according to a
similar moral code. Both pride themselves on being professionals, and
while remuneration is important it is not their main driving force. Holmes often repeated that he worked rather for the love of his art than to acquire wealth and while his charges were on a fixed scale he often waived them. Lupin is in Leblanc’s words ‘brave and chivalrous’ and describes his victims
as ‘people inferior to himself, not worthy of sympathy’."

As for the two authors, they came to see that they were both victims of their own success:

"Finally, a similarity between the creators of Lupin and Holmes. Both
Leblanc and Conan Doyle aspired to be recognised as writers of respectable mainstream literature . . . But both were disappointed. Eventually and reluctantly they realised that they were shackled to their creations." 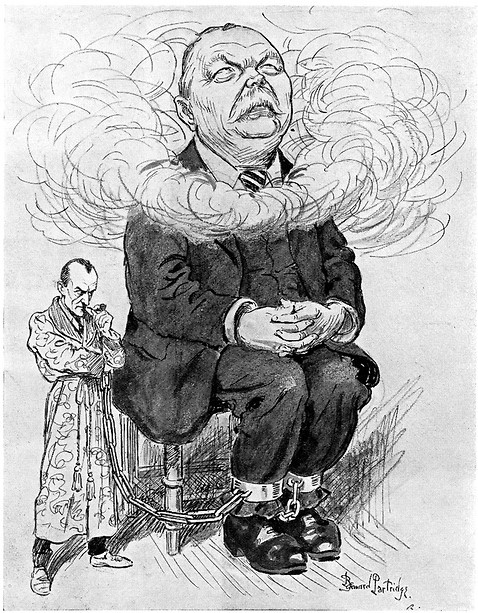 Resources:
- Good summary articles about our authors and their characters are on Wikipedia: Arthur Conan Doyle (HERE) and Sherlock Holmes (HERE); Maurice Leblanc (HERE) and Arsène Lupin (HERE).
- An anarchist named Alexandre [Marius] Jacob, a "gentleman burglar," had an unanticipated influence on Lupin's development; see (HERE).
[Note: "Alexandre Jacob (September 29, 1879 – August 28, 1954), known as Marius Jacob, was a French anarchist illegalist. A clever burglar equipped with a sharp sense of humour, capable of great generosity towards his victims, he became one of the models for Maurice Leblanc's character Arsène Lupin." — Wikipedia]
- The Franco-British Exhibition of 1908 was a big deal at the time; see (HERE), (HERE), and (HERE)—and if those aren't enough, there's a 336-page book about it (HERE). 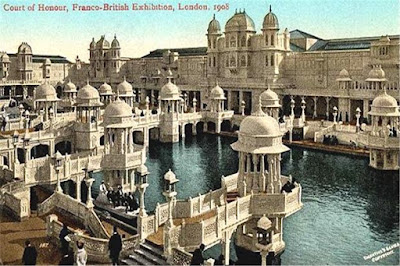