"He Was Willing to Take a Risk" 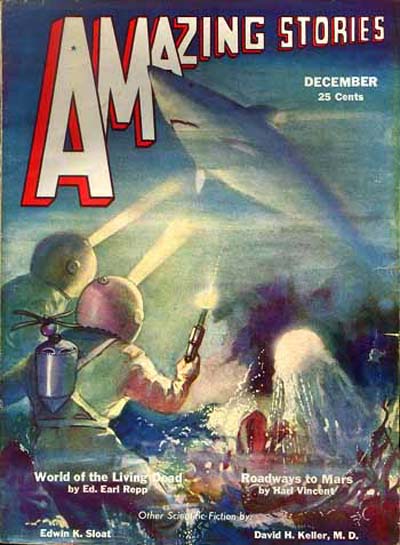 "Van Sicklen evidently did not want this note-book to reveal its contents to anyone, for he had taken special pains to lock it away where it would not ordinarily be found."

A knotty problem manifests itself when a scientist, alone at the time, dies of hydrocyanic gas poisoning in what could be described as a hermetically-sealed room:
"How had the cyanogen gained entrance to the laboratory when there had been no means of it doing so. The windows had been barred, the door did not have the conventional keyhole. The room was made sound-proof, and was almost air-tight; there were no crevices or other means by which the gas may have seeped in from the outside. There was nothing within the room, no chemical compounds, which by being mixed would react to give off any cyanogen compound. And yet this was the gas by which Van Sicklen had come to his death."

Comment: Starting out as he does with a really great locked room premise, our author could have presented us with a nicely turned out puzzler, but didn't.

Resources:
- The only things we know for sure about Edward Podolsky—and that's not much—are to be found on the Internet Science Fiction Database (HERE).
- Our author could well be the Edward Podolsky, M.D., who wrote a non-fiction article for The American Mercury about "The Radio Knife" (HERE; PDF).
- Some of the science in this story has a suspicious aroma about it; even so, there could be something to the whole idea after all—see the Quora Q & A (HERE).